Track And Field: Dennis Retires After 20 Years With Buckeyes, 45 Years Of Coaching 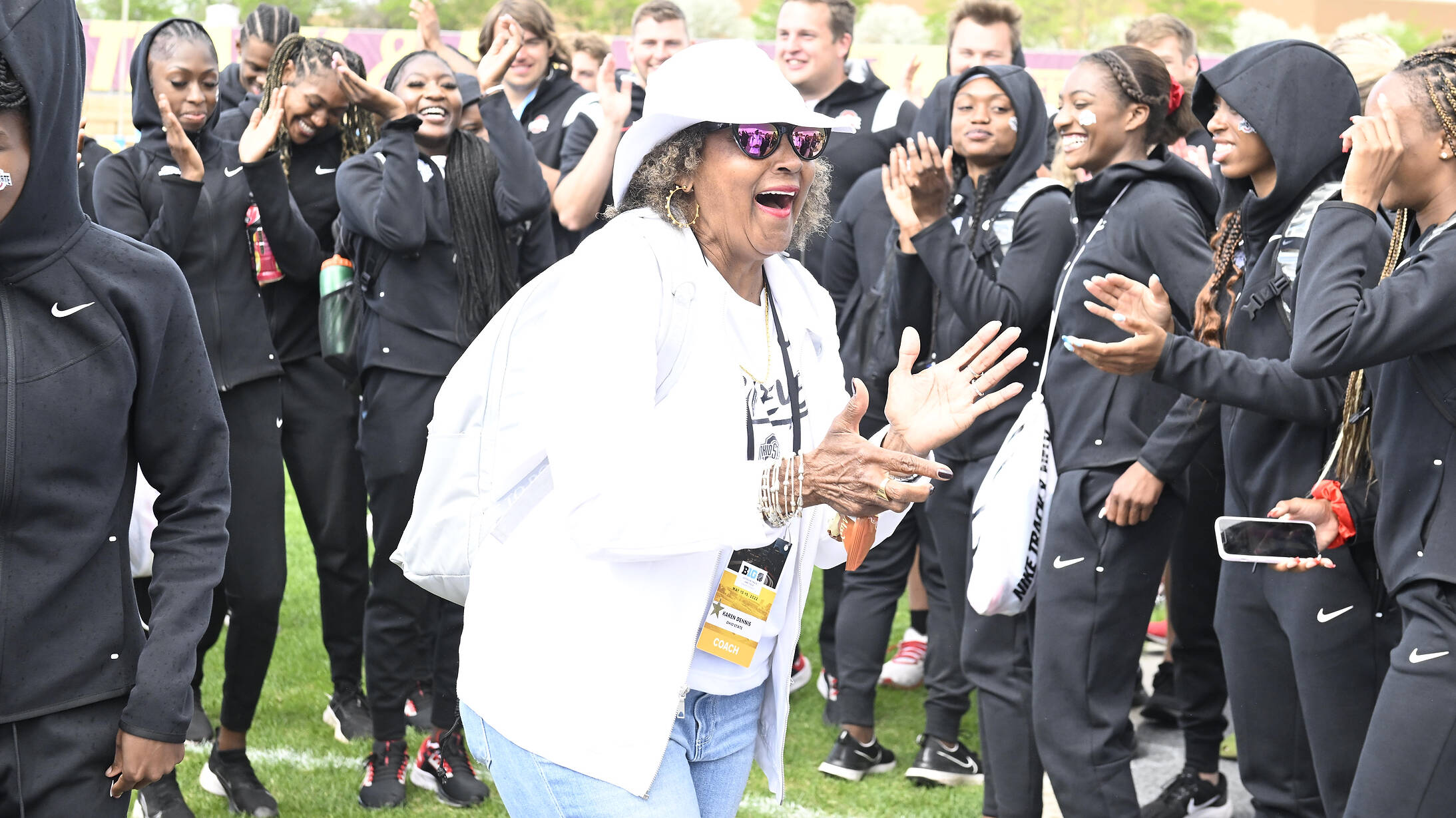 Ohio State athletics will celebrate the career of Karen Dennis this week and beyond after the long-time director of track and field and cross country announced her retirement.

Dennis coached in Columbus for 20 seasons and spent 45 years coaching the sports in a decorated career. Her athletes became individual champions, Olympians and hall of fame inductees, while personal coach of the year accolades elevate her legacy to a rare level unseen across the track and field and cross country landscape.

“I hope this isn’t too much of a surprise,” Dennis said. “I have coached for a long time and there are still things in life I’d like to do. I am truly thankful for this profession, and I want to express my gratitude to the many assistant coaches and support staff that have shared and sweated alongside me on this incredible journey. They share a primary role in the success of our programs.”

Dennis’ announcement comes three weeks after the men’s and women’s track and field teams captured the Big Ten Conference outdoor championships. It also comes days after 22 of her student-athletes competed at the NCAA Championships in Eugene, Ore.

Those athletes were the second group Dennis thanked in her retirement speech. She immediately followed that expression with gratitude for the coaches and athletic staff that worked with her in her coaching career.

“I also want to thank the hundreds of student-athletes who have shared their lives and careers as Buckeyes, and also their parents,” Dennis said. “I want to thank the great coaches here at Ohio State, and in the Big Ten Conference and nationally, who have served as examples of excellence and who have challenged and motivated me to be better. “

According to the Ohio State record book, Dennis’ 12 Big Ten titles are the most all-time for a female coach at Ohio State and are tied for third among all coaches. Only former men’s golf coach Jim Brown (17 titles) and tennis director and men’s coach Ty Tucker (16 titles) has led the Buckeyes to more conference championships than Dennis. She is tied with former men’s swimming’s Mike Peppe and sits in front of former women’s golf coach Therese Hession (11 titles).

The conference title came months after five of her student-athletes competed at the 2020 Tokyo Olympics, including the United States shot put star Adelaide Aquilla, who defended her outdoor shot put title on Thursday with an NCAA-record toss of 64 feet 5 1/4 inches. Dennis coached eight Olympians in her 45-year career.

“I want to thank Gene Smith, who believed in me and hired me into the dual men’s and women’s position at a time when very few women in all of track and field had a dual role,” Dennis said. “And, I want to thank my longtime sports (associate) athletic director T.J. Shelton, who was very instrumental in the success of this program.”

Smith shared his thankfulness to Dennis in a statement with the athletic department, claiming he felt honored to work with the “legendary” Ohio State coach and director during her storied career.

“I can’t thank Karen Dennis enough for her friendship, her mentorship and the love she has for her student-athletes and Ohio State athletics,” Gene Smith, Senior Vice President and Wolfe Foundation Endowed Athletics Director, said. “I want to congratulate her on a truly legendary career in coaching. We have been incredibly fortunate to have her leading our programs.”

Her 45-year coaching career includes 37 years as a head coach, with 16 seasons at Ohio State, 10 seasons at UNLV and 11 seasons at Michigan State. She guided 39 teams to their respective indoor and outdoor NCAA championships.