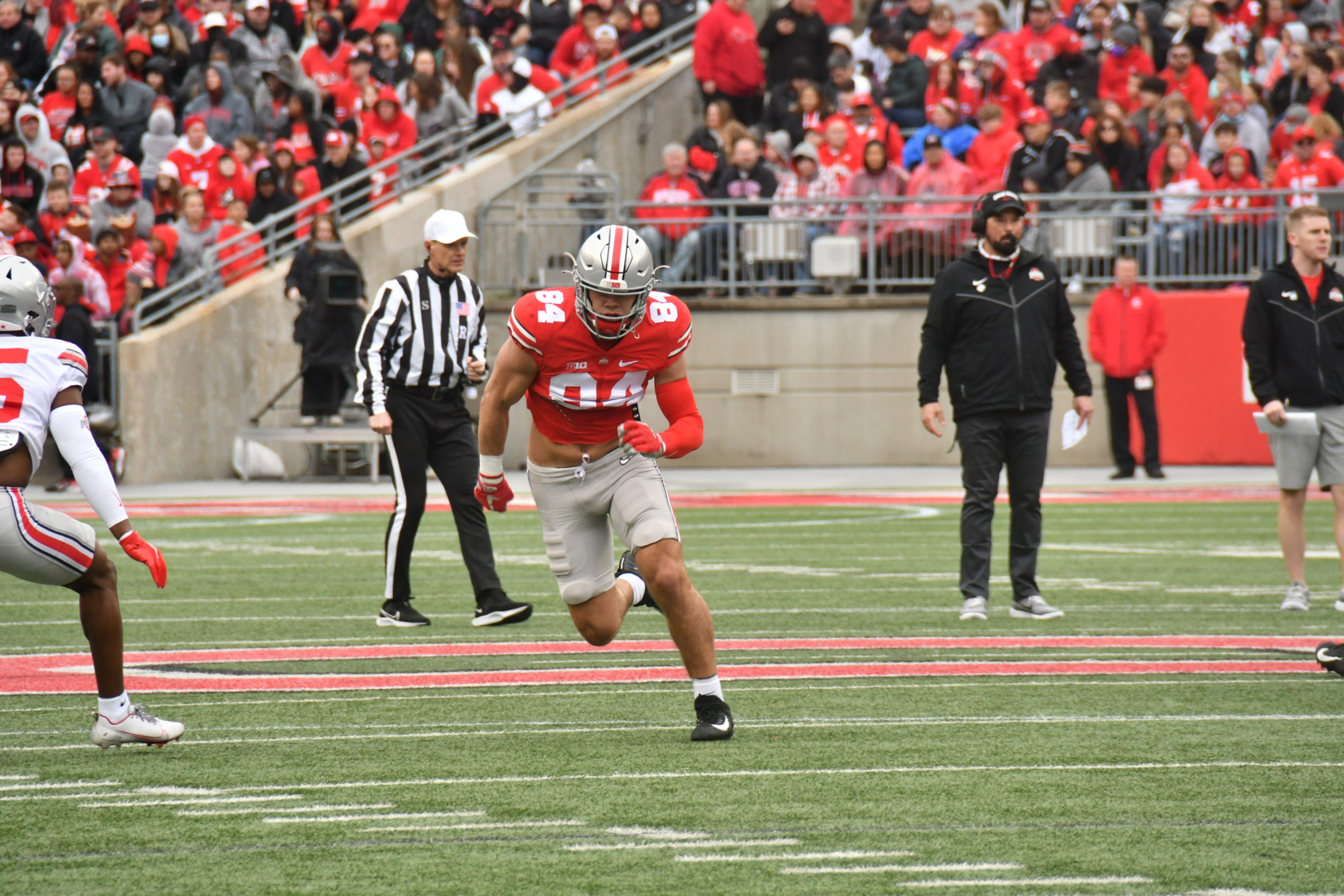 It’s hard to take a whole lot away from a spring game, especially one that splits offense and defense into teams and keeps track of score in name only. Ohio State’s April 16 showcase was no different. Much of the team is still unsettled, be it the result of positional battles or the fruit of new defensive coordinator Jim Knowles’ labor in installing a new system that we saw very little of in Ohio Stadium. Yet, leaving spring practice, the show must go on, and takeaways must be made.

1. The quarterbacks are ready to roll

It might be a glorified practice, but the defense is still going full-speed in pass coverage, just as wide receivers are on routes. Defensive ends are fighting to get to the quarterback, and though the tight-window throws might be a little less tight against a still-in-progress defense, they’re valuable to see quarterbacks hit regardless.

And for the most part, Ohio State’s trio of signal-callers did just that. Incumbent Heisman finalist C.J. Stroud finished the game 14-of-22 passing for 120 yards and a score, making the same connection with Jaxon Smith-Njigba early in the game that he had for much of the 2021 campaign. He played within himself and didn’t do anything excessive, be it positive or negative, and drew praise from his head coach for it after the game.

“I think C.J. has been very consistent, he’s very competitive and one of the things that he’s done a really good job of, at least recently, is taking what the defense gives him,” head coach Ryan Day said. “Jim does a really good job of changing up looks. There are times when he’s going to drop eight players into coverage and say, ‘You have to check the ball down.’ As a quarterback, especially somebody as competitive as C.J., he has to force himself to take what the defense gives him, take the checkdown, get five or six yards and then move on. I think he’s learning to do that.

“His leadership has been excellent, I think he’s had a really good spring and he even wanted to get back in there on the last drive because he wanted to play, and that’s just the way he is, he’s one of the more competitive guys I’ve been around.”

Behind him, Devin Brown and Kyle McCord played just about perfectly the roles that Ohio State’s coaches have described them with through the spring. Brown looked every bit the freshman gunslinger with an ability to extend the play, delivering some of the day’s best throws as well as its worst, a deep shot that sailed beyond its intended target and into the hands of Cameron Kittle.

McCord, meanwhile, flashed a side of him we rarely saw last season. He was safer with the football and willing at times to take a little heat off to tuck a throw in when needed. He looked, frankly, like a second-year quarterback making the leaps associated with that. He completed 14 of his 20 passes for 129 yards, with a very nice touchdown strike to Joe Royer.

2. The battle at tight end has only just begun

Speaking of Royer, it seems coming out of spring camp that Ohio State has picked up more questions at tight end than it has found answers. With the departure of Jeremy Ruckert, the Buckeyes have an open battle to take over the starting tight end spot, and underwent the first stage of that battle without Mitch Rossi, who is expected to play a strong role in that position this season but missed the spring with an injury.

Instead, it was third-year players Joe Royer and Gee Scott Jr., fourth-year converted linebacker Cade Stover and the youngsters, Sam Hart and Bennett Christian, competing this spring. It seems that the trio of veterans is more likely to compete for serious playing time if Day is to be taken literally, but splitting the three right now is not an enviable task.

Scott led the way with five receptions for 40 yards, Royer had that nice touchdown grab and snagged another pass to finish the day with a pair of receptions for 37 yards, and Stover, while not on the receiving end of any passes, spent plenty of time on the field with the first-team and worked well as a blocker.

“I’ve been impressed with the tight ends,” Day said. “Losing Jeremy Ruckert certainly was significant, but to see Cade Stover come up and have the spring that he’s had has been really good. Joe and Gee both have been excellent, and we’re excited to get Mitch back. When you look at those guys right there, that gives us some versatility in those packages, which is really exciting. And that’s in the run game and the passing game. And then Bennett Christian has been really showing up too as a young tight end.

“It’s a developmental position. You look at when Cade made that investment, about a year ago, you’re starting to see him get the fruits of that now. It’s the same thing with Gee, with Joe. That’s what a tight end is. It’s very difficult to come in and play as a young player. Those guys are developing, they’re putting in the work and we’re hoping that’ll be a position of strength for us moving into August.”

Ohio State didn’t show much on Saturday, keeping the vast majority of its defensive scheme under wraps, but it did check off a few boxes in the Knowles defensive bingo card. Chief among them was the usage of the “Leo” position, currently identified as the “Jack” as Knowles continues to flesh out his system and identify fits for the spot. Sophomore Jack Sawyer and redshirt sophomore Mitchell Melton seem to be the players in contention there, though J.T. Tuimoloau did his share of moving around as well. Sawyer and Melton flashed an ability to drop into coverage, and Knowles showed off a willingness to move all three of them around when he felt the offensive look merited it.

“I waited for six or seven practices to (use the Jack position). In the second half of spring, I think we came a long way. I really did. Now I want to sit down and look at it. I want to see how we can blend the whole thing together, start to meet with those guys individually and see who is ready for the challenge of doing everything. I thought we came a long way in a few practices.”

There wasn’t much to grasp beyond that, but that’s by design. This scrimmage was about tackling, energy and effort, and Day felt good about all of that.

“Today was very basic as you could see, on both sides of the ball,” Day said. “But what I liked was the physicality, guys running around, tackling. That was something that we wanted to get done in this game and I thought we saw it. It was good to see those guys run around and tackle, we’ll take a look at the film, but this was more about fundamentals, tackling and playing with effort today.”