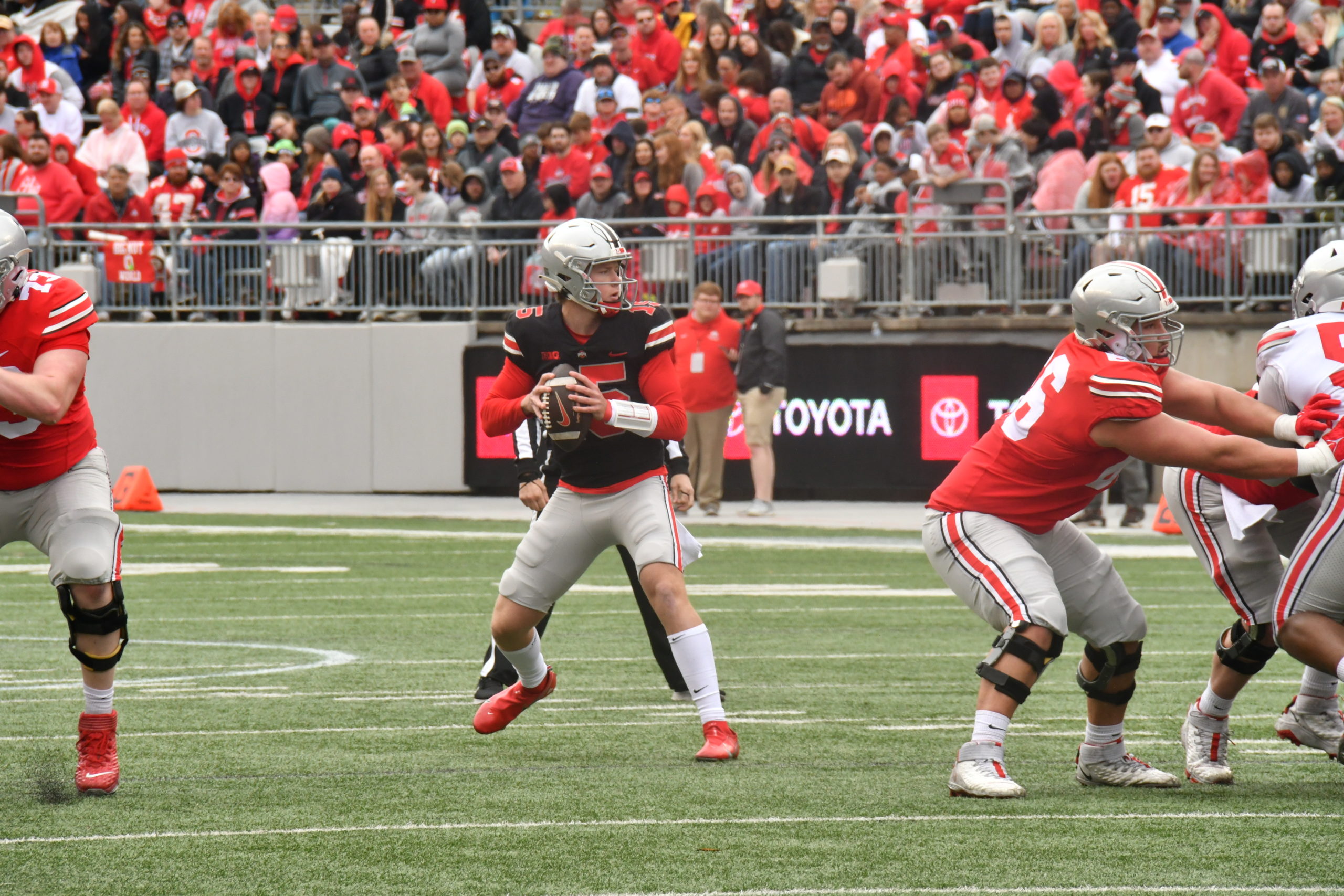 Ohio State’s passing attack ruled the day, as the quarterbacks finished 39 of 67 (58.2 percent) for 390 yards, three touchdowns and one interception courtesy of freshman Devin Brown. The stop-and-go nature of the spring game does not lend to a quarterback getting into a rhythm, but all three quarterbacks completed at least 11 passes and threw for a touchdown. Brown led the way with 141 passing yards on 11-of-24 passing, while sophomore C.J. Stroud was 14 of 22 for 120 yards and sophomore Kyle McCord was 14 of 20 for 129 yards.

The quarterbacks also spread the ball around well, with 17 receivers hauling in at least one reception. Of those, junior tight end Gee Scott Jr. brought in five receptions, while graduate wide receiver Xavier Johnson led the Buckeyes with 50 receiving yards.

It seemed most receivers on the team – with the exception of junior Julian Fleming, who was “day-to-day” with an injury according to head coach Ryan Day – had their moment, so if Saturday was any indication, Stroud will have no shortage of targets to rely on this upcoming season.

The format itself – both the scoring side of things as well as the tackling portions of the contest – were questionable. Players were seeimingly unclear at points when it was and was not okay to tackle, leading to not quite the physical scrimmage that was expected. The tackling led to an unfortunate injury to junior linebacker Mitchell Melton, who left the game in the first half and did not return.

In terms of play, it’s difficult to glean much from the exhibition due to Ohio State admitting to not wanting to show much defensively. The offense looked fine and the defense responded well in the vanilla looks being shown on both sides of the ball, though it is a testament to the defense that the final score of 34-26 was as close as it was given the format favoring the offense.

The Buckeyes as a whole also had some sloppy moments in the game, with seven total penalites for 50 yards and going just 2 for 3 on field goal attempts. Junior Jake Seibert connected on a 42-yarder and sophomore Garrison Smith hit a 38-yard field goal, while freshman Jayden Fielding missed from 38 yards out.

The quarterbacks did not go deep often in Saturday’s exhibition, but there were a handful of connections downfield that drew eyes to the corner of the end zone.

Ohio State’s offense got its second touchdown when McCord found junior tight end Joe Royer in the middle of the end zone for a 24-yard touchdown. McCord stayed stout in the pocket, delivering a strike to the leaping Royer, who finished the game with two receptions for 37 yards and the aforementioned touchdown.

Another option would be the 19-yard touchdown strike from Brown to sophomore wide receiver Reis Stocksdale, a walk-on receiver out of Little Miami in Morrow, Ohio. Brown hit Stocksdale in the left corner of the end zone for his only touchdown pass of the game.