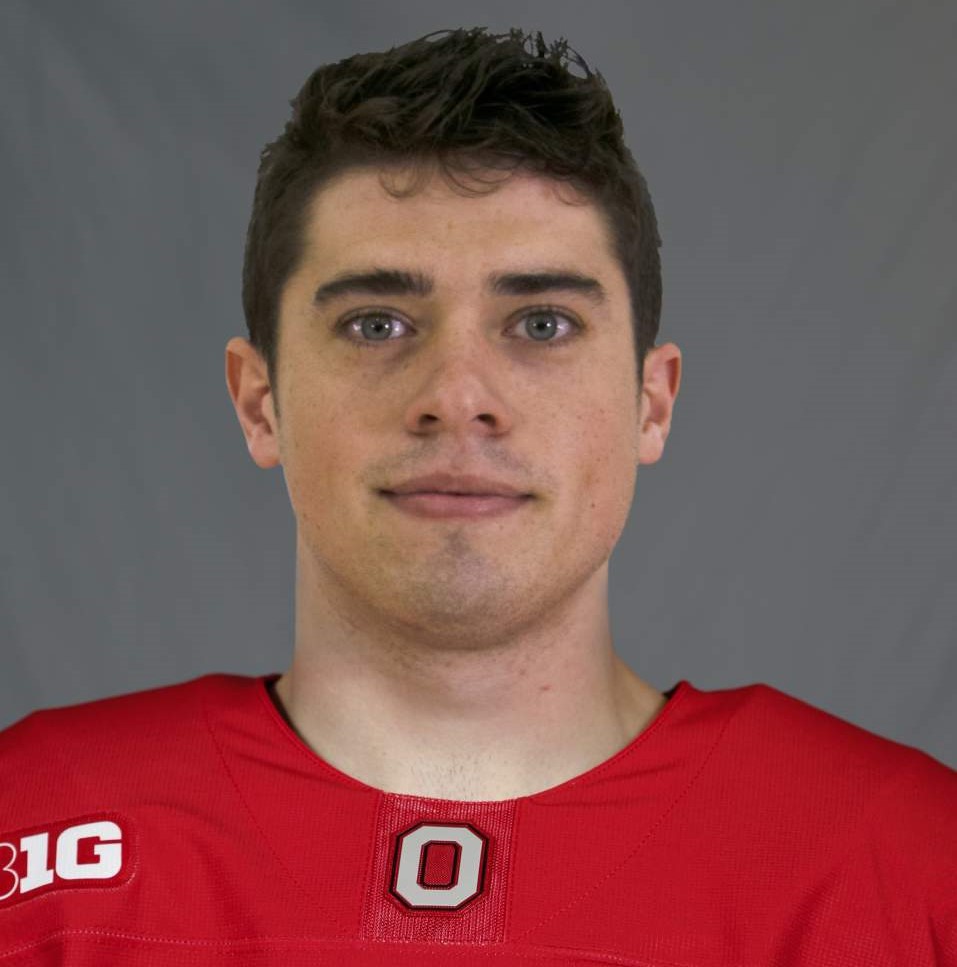 The Ohio State men’s hockey team knew that being freshly crowned as the top-ranked team in the country brought with it another level of intensity from its opponents.

That certainly was the case for the Buckeyes’ weekend in the desert Oct.12-13 when upstart Arizona State, in its fourth season at the Division I level, took them to the limit.

The Buckeyes prevailed 3-2 in the opener and 3-0 in the rematch at the quaint Oceanside Ice Arena in Tempe.

OSU entered the series as the No. 1 team in the USCHO.com and USA Today/USA Hockey Magazine polls, its first time atop the charts since November 1983 in the WMPL Radio poll.

Senior co-captain Mason Jobst had two assists in the first game and a penalty shot in the second that put the Buckeyes (2-0-0) ahead 2-0 in the third period before an overflow crowd of 925.

The Buckeyes were wary before the series of the Sun Devils, who had shutout Alaska Fairbanks twice the previous weekend.

Having a two games on their ledger was a concern to Ohio State coach Steve Rohlik.

“It gives them a little advantage. They played two games. They certainly had success,” he said prior to the series. “We’ve got some returns, we’ve got some veterans who’ve played a lot of important games. I’m going to lean on our older guys and captains to make sure we’re ready.”

Off To A Good Start

Carson Meyer had a goal and assist the first night as the junior transfer from Miami (Ohio) – a Columbus Blue Jackets’ prospect – had a smashing debut for the Buckeyes.

The Buckeyes led 1-0 after the first period of the season opener on a goal by senior Freddy Gerard, who took a pass off the wall from Meyer, who played at Miami (Ohio) the past two seasons. Johnny Walker made it 1-1 on a power-play goal 50 seconds into the middle period for the Sun Devils.

OSU got a man-up goal at 2:23 from senior Dakota Joshua with assists to Jobst and junior defenseman Wyatt Ege. The Buckeyes made it 3-1 at 4:38 with another power-play goal as junior Tanner Laczynski set up Meyer with Jobst getting the secondary helper.

That appeared to be the final scoring of the period until Walker redirected a shot by Joshua Maniscalco with just two seconds left to make it 3-2.

Walker attended this summer’s Blue Jackets’ development camp with Meyer and Romeo, who made 12 saves in the third period to preserve the lead. ASU’s Joey Daccord made 32 saves, 18 of which came in the second period.

“I’m really proud of our guys of how we pushed in third,” Arizona State coach Greg Powers said. “I thought there was a lot of push back and pride playing on our home ice.”

Freshmen Ryan O’Connell, Quinn Preston and Gustaf Westlund made their OSU debuts as did Meyer and another transfer, Collin Peters.

Junior Ronnie Hein scored twice the following game, the first putting the Buckeyes ahead at 18:56 of the middle period. After the Jobst penalty shot at 13:26 of the third, Hein scored into an empty net with 20 seconds left to disappoint the crowd of 922.

The goaltending was stellar again. Sophomore Tommy Nappier stopped all 27 for his second career shutout to improve his record to 5-0-0.

OSU’s penalty kill was 9 for 10 on the weekend while its power play was scoreless in six tries in the second game to finish the series 2 for 11.

“It was a hard-fought weekend,” Rohlik said. “Give our guys credit for competing right to the end tonight. We found a way to get another win. This is good momentum heading into a tough series next weekend vs. UMass.”