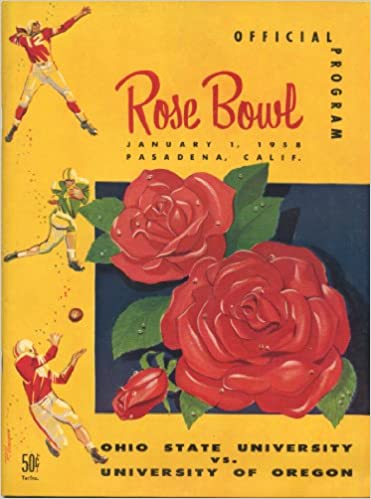 With the return of football up in the air, now serves as a perfect time for reflection on the history of football, and the strategic evolution of the game. To do that, the film study will be spending the offseason looking back at classic Ohio State games, starting here, with the 1958 Rose Bowl between Ohio State and Oregon. Given the time difference, some terminology will be a little bit rough, so we’re going to go off of the phrasing used by Ohio State at the time. Graphics via the wonderful FootballXOs.com, which has Ohio State’s 1957 playbook available for free download.

Woody Hayes was always on brand. It was part of his charm, and it was part of what made him one of the best coaches of his era. There’s something to be said for doing the exact same thing every single day when working with college football players, and that’s an ideology that Hayes subscribed to as much or more than anyone else. He was a true disciplinarian for better or worse, and took that approach to all facets of his coaching.

That included play design and game planning, which Hayes saw less as something to be adapted weekly but as something to be perfected and trusted through the season. While I call it on brand, Hayes called it consistency. He valued consistency so much that he dedicated basically the entire first page of his 1957 playbook to it, while explaining Ohio State’s offensive identity and what he felt was the correct approach to winning football games.

“Our offensive football is based upon the principle that we must first establish a sound running attack,” Hayes explains. “This does not mean that we do so to the ultimate exclusion of all other phases of the game. But we have learned through experience and intensive study of Big Ten football that the team with the better running game will most often proudly walk off the field with the ball tucked under its captain’s arm.

“A well-coached and well-manned running attack is the most consistent factor in football. We use the word ‘consistency’ to denote success of a play. For a consistent play is one which has gained at least three yards. If each play gains three yards, it is almost a mathematical certainty that at least one of the three plays will gain considerably more than three years so that possession of the ball is the net result”

This is a familiar concept for Ohio State fans: three yards and cloud of dust. Hayes loved his running attack, as he outlines, and made it the focal point of just about every single game for nearly his entire tenure in Columbus. He lightened up a bit into the late 60s and 70s, partially because new coordinator hires and better quarterbacks forced his hand, but for the most part, Hayes was unapologetically himself in offensive play calling.

The 1957 season is an excellent example of that. Ohio State went 9-1, taking its lone loss in the first week of the season, 18-14 against TCU. The Buckeyes passed the ball just 7.8 times per game, to 61.6 rushes a game. Starting quarterback Frank Kremblas passed 47 times on the year, 32 fewer attempts in the air than he had on the ground. Ohio State’s first, second and third resort was the running game, and after years of work-shopping it, Hayes had his rushing attack down to a science. The 1958 Rose Bowl against Oregon, a 10-7 win for the Buckeyes, serves as essentially the only video of this team, and also as a pretty outstanding resource for understanding Hayes’ offense.

The first thing to understand about Hayes’ running attack is that a whole lot of it looks very similar, by design. Ohio State only had three running series that it really liked to use, and stuck primarily to the T-formation, both because it was easy for the defense to lose track of who had the ball in the T and because everything was close to the line of scrimmage, which meant no negative plays, which Hayes hated more than just about anything. Out of that split-T, Ohio State relied on the inside belly series, power series, and split-T series to move the football.

On the first play of the game, we see that inside belly series. Kremblas fakes the handoff to the left halfback (Dick LeBeau) and hands off to the fullback (Bob White) to follow behind the halfback on a fullback buck call. The other halfback, Don Clark, is used as a decoy to the outside in hopes of peeling off an edge defender to create a numbers advantage up front. The linemen are following Hayes’ revolutionary (at the time) adjustment based blocking scheme, and blocking, as Hayes describes, “in the only direction the defender can be taken.” 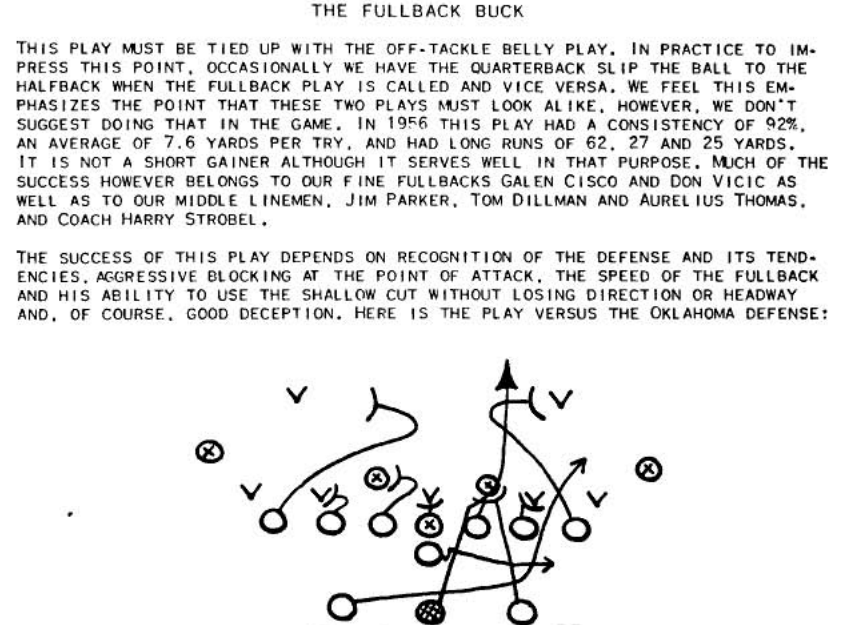 From there, White just has to follow his blockers, who have created a nice push for a solid first down gain.

A few plays later, Ohio State shows off another play from the belly series, the halfback off-tackle, which Hayes mentions as directly tied to fullback buck.

This time, the fake goes to White, with LeBeau following him and the other halfback and looking to get just inside of the tackle’s shoulder. The line doesn’t quite get the push that it was looking for, so those second-level blocks don’t have the chance to develop, but this serves as another solid run to help establish Ohio State’s attack and force Oregon to pack its defense in, which can be exploited later. Not that much later, though. On the same drive, Ohio State takes that expectations of an inside run and flips it on its head, forcing Oregon to defend the perimeter for the first time with a halfback power sweep out of the power series.

Following behind a pulling guard, Kremblas and White, the ball goes to the speedy Don Clark on a pitch. The offensive line seals essentially all of Oregon’s front inside, helped by those previous inside running plays that sucked the defense in. With just a few Oregon defenders left on the outside, Clark is able to follow his blockers into a huge amount of open space and use his acceleration to create a huge gain, following the Hayes approach of grinding a defense down before creating a huge play to perfection. 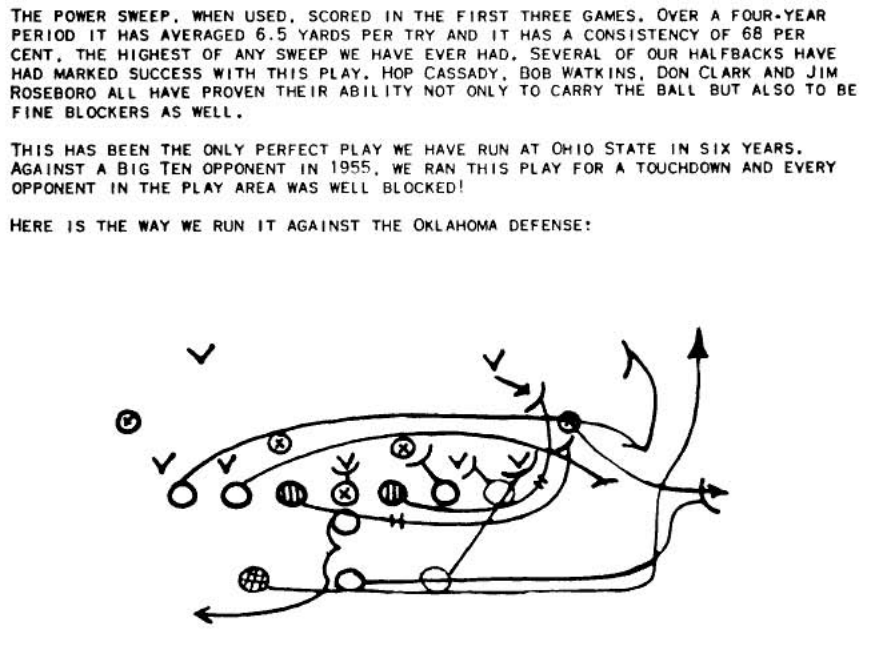 The Buckeyes showcase the strengths of series-based play calling later in the drive, on third-and-long, by busting out their first pass of the game. Hayes explains in his playbook that he isn’t anti-pass as his record may show, rather that he believes the pass serves to complement the run.

“We do not view the passing game with the contempt that our recent record would indicate but we do believe that in Big Ten football your passing attack must be regarded as an auxiliary to your running game,” Hayes wrote.

Functionally, that approach meant that almost all of Ohio State’s passing production came from play action, using that lethal rushing attack to misdirect the defense, while letting an end slip free into the defense undetected.

This is the roll out pass from the fullback – off-tackle play, designed to look like a handoff to Clark that pulls in the defense, while the end drifts into the secondary and breaks towards the boundaries, providing an easy target for the rolling quarterback. The playside halfback heads to the boundaries, the fullback hooks into the middle of the field after the fake, and the backside halfback serves as a blocker for the rolling quarterback. It works to perfection here, as Kremblas hits Jim Houston for the big gain, one of Houston’s four receptions on the season. He ended the year with 126 receiving yards, easily leading the team. This is one of seven passing plays in the entire playbook. 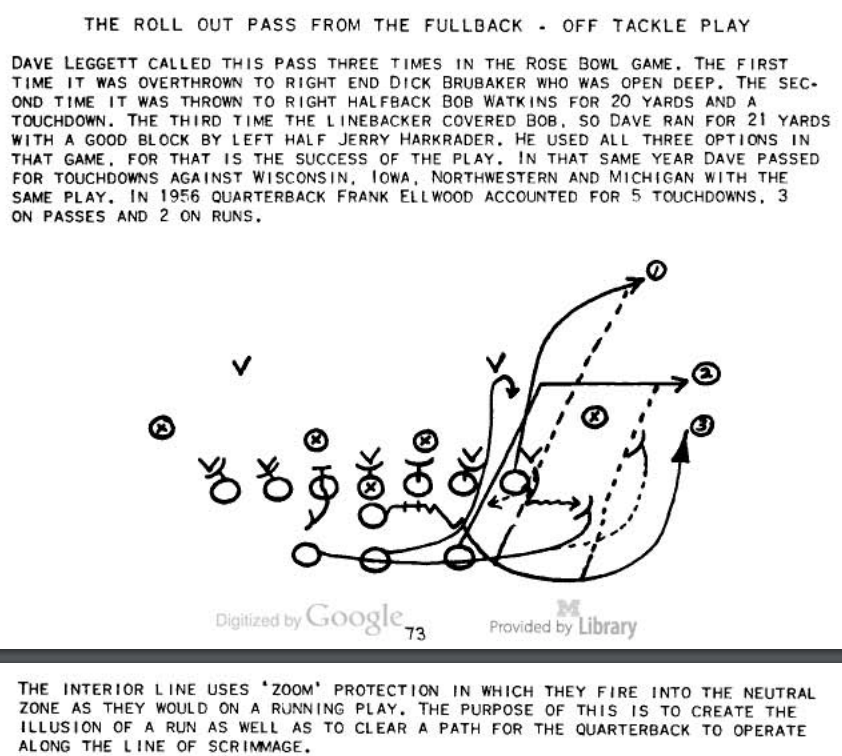 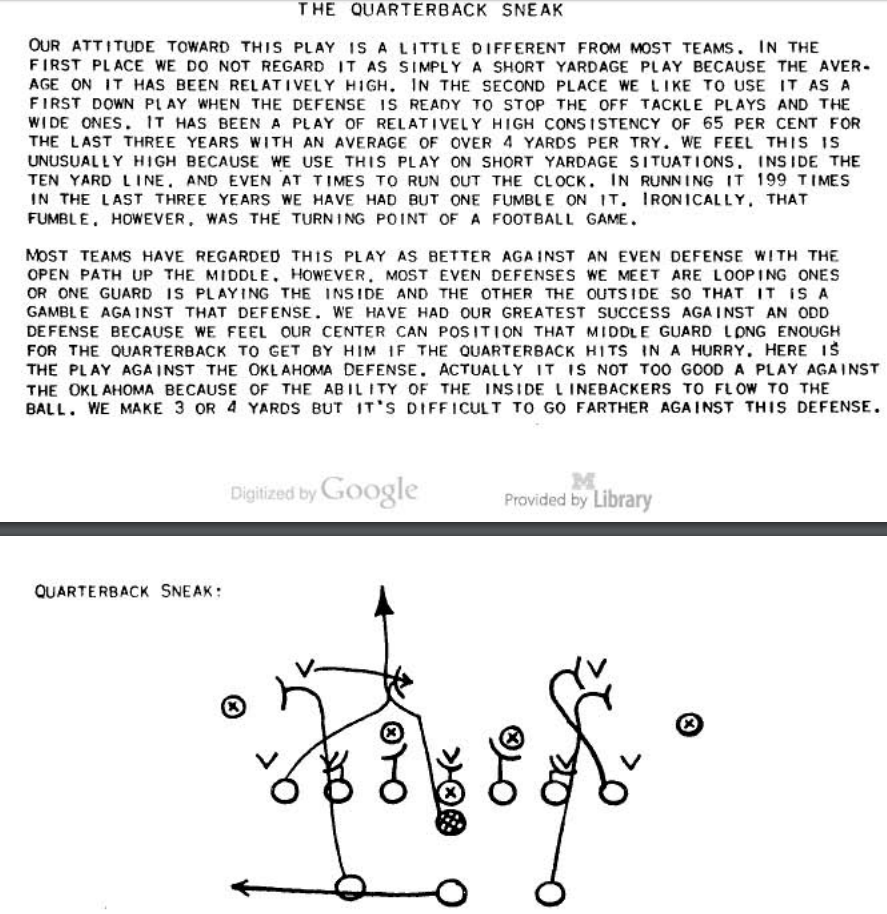 There are other running options in Ohio State’s playbook, including some pretty neat sweeps, counters and draws that Hayes seems to have an underlying disdain for, while still acknowledging their importance, but this whole drive covers the Hayes approach almost perfectly. There’s not a whole lot of versatility or variance, because there really doesn’t need to be. One play sets up the next, the defense overreacts, and then an outside run or well-placed play action generates a big gain.

The danger of this offense is in its ability to take advantage of those overreactions, to redirect defenders eyes towards players that don’t actually have the ball, while using a well-coached offensive line to create holes before the defenders realize where the ball actually is. It’s one big magic trick, a veneer of complexity to the defense that can actually be boiled down into just a few concepts that a quarterback can call out based on what he’s seeing from the defense.

Hayes’ offense was stubborn and at times felt more tedious and stale than anything else, but that’s the whole point. He wanted the defense to get bored and complacent, so that when the big play hit, it hit 10 times harder. Through the 50s and 60s, that was more than enough to build a dominant, nearly unstoppable offense.