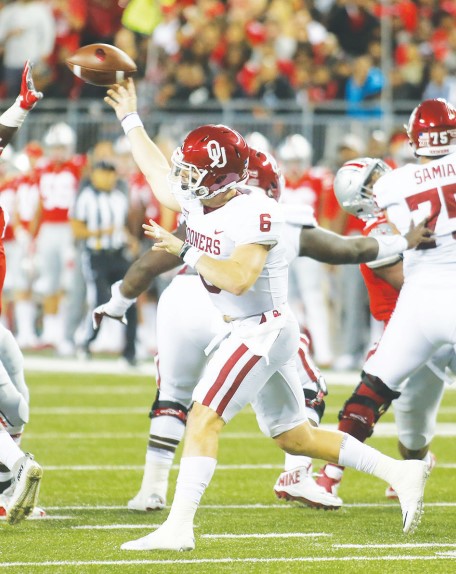 With the return of football up in the air, now serves as a perfect time for reflection on the history of football, and the strategic evolution of the game. To do that, the film study will be spending the offseason looking back at classic Ohio State games. Today’s film study focuses on Ohio State’s defensive struggles against Oklahoma in 2017. Video is from this cut-up. Last week’s film study can be found here. Quick note: the throwback film study will be continuing throughout the fall, and until Ohio State plays football again.

It was a rare occurrence during Urban Meyer’s tenure in Columbus to see the Buckeyes beaten soundly. In fact, it was a rare occurrence to see them beaten at all, but when the Buckeyes did lose, it almost always seemed to be through a fault of their own, be it a muffed punt against Clemson in the 2013 Orange Bowl, poor play calling against Michigan State in 2015, a rushed field goal attempt against Penn State in 2016, or a lack of preparation against Virginia Tech in 2014, Iowa in 2017 and Purdue in 2018. Of Meyer’s nine losses with the Buckeyes, just three have the makings of the Buckeyes being truly dominated by a team that was at least equal in talent, if not outright superior.

First is the 2013 Big Ten Championship. An argument could be made that Ohio State wins with a better play call late in the game (give the ball to Carlos Hyde, etc…), but Michigan State dominated the Buckeye offense pretty much all game, and was the better team at the end of the day. Next is the 2016 College Football Playoff game against Clemson, in which Ohio State likely didn’t even belong as the same field as the Tigers, thanks to a lackluster offense. The last of the bunch was in 2017, when the Oklahoma Sooners and brand new head coach Lincoln Riley came to town, thrashed the Buckeyes, and planted a flag in the center of Ohio Stadium.

Like with the other two losses that can be counted in that list, Oklahoma won thanks to a combination of both scheme and talent, matching up with the Buckeyes in athletic ability and skill and winning the schematic battle handily. What went wrong for second-year defensive coordinator Greg Schiano against the Oklahoma offense and Riley that led to that defeat?

A lot of it is connected to Oklahoma’s heavy usage of run-pass options (RPOs), and the way that those could be used to exploit Schiano’s rigid defensive approach.

Oklahoma had an RPO tag attached to almost every single play that it used in this game, and frequently looked to exploit Ohio State across the middle when Baker Mayfield pulled the ball and looked to pass. The Sooners did that entirely because of Ohio State’s scheme, and specifically, the way that linebackers were being asked to play. In Greg Schiano’s man coverage system, the front seven usually adheres to a one-gap approach, which means that each defender is responsible for one of the gaps up front to stop the run. In the case of a pass, the linebackers just play a shallow zone in the middle of the field to help the outside cornerbacks in man coverage. There are some instances of a linebacker playing man coverage, but for the most part, this was how Schiano wanted his linebackers to defend.

That style is incompatible with the RPOs. The linebackers are told to bite down to stop the run if they read run blocking from the offense line, and RPOs are designed entirely around making the defense read run blocking, only to pull the handoff away and hit a quick pass. With the linebackers biting in on fakes, the space in the short middle of the defense was completely vacant, leaving room for Oklahoma to slip receivers into. Here, Oklahoma shows an outside zone fake, gets the linebackers to collapse in, and then hits a quick pass to H-back Dimitri Flowers.

With no linebackers in that space, Flowers is completely uncovered, and safety Damon Webb is forced to make the play in open field. He does it here, but that’s a difficult place to put your safety in. While a lot of these will just go for medium to short gains, only a few missed tackles in the final level with the linebackers out of the way can be enough for an offense like Oklahoma’s to put quite a few points on the board.

It’s the same idea here, even down to the receiver target. The handoff threat brings the linebackers in, and Mayfield hits a wide open Flowers in the middle of the defense, forcing a defensive back to make a tough play. The line isn’t even showing run blocking here either, the linebackers just don’t pick up on the fake in time to drop into a deeper coverage.

Oklahoma built its gameplan around this, using Flowers as the primary threat but mixing in tight ends off of the line as well. Because Ohio State refused to dedicate a defender to covering Flowers or anyone coming off of the line, there was nothing that the defenders could do to stop him. Even when one of the linebackers, Chris Worley, is designated to drop into a zone over Flowers, he’s only serving as a stop-gap to one side of the field. Flowers just cuts further inside and Worley is unable to keep up until Flowers picks up more than enough for the first down. Ohio State was always at least one step behind Oklahoma’s play calling.

After a first half of several strong Sooner drives cut just short, the dam broke in the second half. As mentioned, when safeties are being asked to make so many open field tackles, they’re going to miss one eventually, and Erick Smith happens to be the victim of that on this play.

Even without attacking the linebackers specifically, Oklahoma did such a great job of overwhelming the Buckeye secondary that it could attack essentially anywhere on the field, so long as Mayfield stayed away from the outside cornerbacks, who were just about the only part of Ohio State’s defense that worked well in this game. Instead, he looked to hit those tight ends off the line, and slot receivers that drew either safeties or linebackers in coverage. Ohio State was much too reliant on the 4-3 defense, putting those safeties in linebackers into situations where, with four receivers on the field, two had to be covered by guys that weren’t particularly good at man coverage.

That’s what happened here. Tight end Grant Calcaterra lines up in the slot, and draws Webb in man coverage, more than 10 yards away. Webb makes an admirable effort, but he just has no chance on this play, matched up against a much bigger receiver with no help to any part of the field.

Later in the quarter, Malik Harrison is put in a similar spot, asked to cover a slot receiver without any help to the inside, as Smith is too far over on his deep zone and Webb is playing man coverage on a bubble screen. Harrison has no chance, Mayfield makes an easy throw, and Oklahoma has another touchdown.

This was a problem for Ohio State through 2017 and 2018. The blame was often put on linebackers coach Bill Davis for these struggles, and for good reason, but a lot of the fault lies with the defensive scheme. Ohio State’s defenders were frequently put in an untenable position when offenses looked to attack them with RPOs, because Schiano was unwilling to relent and step away from his commitment to running man coverage. To try to fix the problem, Ohio State just stacked more and more concepts on top, making things too complicated for the players and rendering the linebackers useless against the run and the pass.

It showed up more in 2018, without players like Denzel Ward, Nick Bosa or Jerome Baker to keep things afloat, but this was absolutely a problem in 2017 as well, as evidenced by this loss and the loss to Iowa late in the season, which saw the Hawkeyes attack Ohio State in the same way for 60 minutes, while meeting little to no resistance. This scheme was not built to handle RPOs, and just about every failure of the Buckeye defense under Schiano can be tied right back to that.