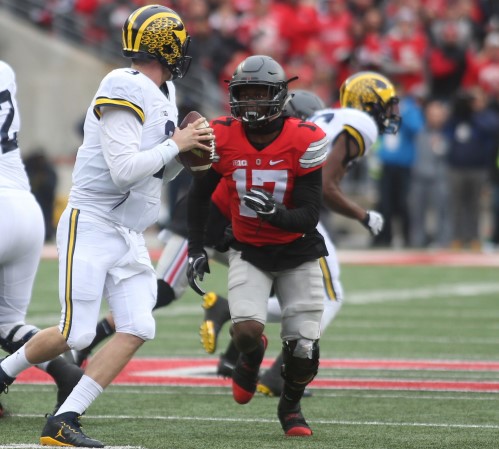 With the return of football up in the air, now serves as a perfect time for reflection on the history of football, and the strategic evolution of the game. To do that, the film study will be spending the offseason looking back at classic Ohio State games. Today’s film study takes a look at Ohio State’s dominant 2016 defense, through its overtime victory over Michigan. Video is from this cut-up. Last week’s film study can be found here.

For a large portion of his tenure in Columbus, Luke Fickell struggled to work his way into the good graces of Ohio State fans after taking over as a co-defensive coordinator and linebackers coach in 2005. While he frequently produced good defenses, especially during his first run as co-DC from 2005-2010, he drew ire at the start of the decade for defensive struggles that really started to take hold in 2011.

With Fickell running the team as interim head coach, Ohio State’s defense took a step back after being consistently excellent under Jim Tressel. Urban Meyer’s arrival and Fickell’s return to the co-DC role saw more troubles, as the 2012 and 2013 defenses seemed to lack the toughness and ability that Ohio State had become accustomed to. They weren’t terrible, but recruiting had faltered a bit, and the Buckeyes struggled greatly in trying to defend the pass, especially in 2013.

Ultimately, those issues likely cost the Buckeyes a shot at the 2013 national title, and shortly after the season, cost Fickell’s defensive coordinator partner Everett Withers his job. Fickell, however, was spared, despite calls from Buckeye fans for him to be fired. He was spared with a catch, though: the Buckeye defense had to improve in 2014. Meyer brought in Chris Ash to help with the pass defense, and Fickell refocused on manning the front seven, partnering as well with new defensive line coach Larry Johnson, who replaced Mike Vrabel following his departure for the NFL.

The Buckeyes didn’t see massive improvement in 2014 on the defensive side of the ball, but they did take enough steps forward during the regular season to earn a spot in the Big Ten Championship game. Then, they exploded onto the scene in the final three games of the year, shutting down Wisconsin, slowing Alabama and bottling up Oregon in consecutive games to earn a national title.

Fickell saved his job, mostly quieted the critics, and then proceeded to produce two of the best defenses in program history before departing for Cincinnati following the 2016 season.

The 2015 unit was likely a bit more talented, but the 2016 group is infinitely more interesting, because of the way Fickell and new co-defensive coordinator Greg Schiano built their defense around an elite defensive line and an even better group of defensive backs, including one of the most talented players in school history in safety Malik Hooker.

With Schiano’s intense adherence to man coverage and Fickell’s understanding of both man and zone, the two were able to combine to create a defense that wasn’t as single-minded as some of Schiano’s later defenses in Columbus, and that blended multiple concepts smoothly and in a way that suited the personnel. The Buckeyes showcased all of their concepts and looks in their overtime victory over Michigan.

A large part of Ohio State’s gameplan revolved around having flexible personnel on the field to match whatever Michigan put on the line. This was Michigan pre-Josh Gattis, so there were still a lot of Jim Harbaugh Stanford-era looks in this offense, with several fullbacks and tight ends. Here, Michigan is in 22 personnel, with just one wide receiver, so Ohio State matches the loaded up box. The Buckeyes move all but two players – a deep safety and a cornerback in man on that lone receiver – into the box to stop a likely run.

With that loaded box, Ohio State is playing run first, with every player assigned a gap to defend. Michigan’s sheer mass helps move the line a little bit, but Ohio State has enough dedicated to stopping the run that there’s basically nowhere for the halfback to go, even with solid blocking.

Ohio State took the same overload approach to defending Jabrill Peppers, who Michigan used several times as a run threat on read option plays, taking quarterback Wilton Speight off of the field. Without the threat of a pass, Ohio State again dedicates nearly everyone into defending the run, with just two players outside of the box, both in man coverage on the outside receivers.

Everyone else is playing the same role as before, defending gaps to close any space that Michigan could run in to. Peppers is reading an isolated Sam Hubbard, but he misses the read, keeping the ball despite Hubbard setting a strong edge and staying home, which would usually lead to a handoff for a more experienced option quarterback.

Even with the missed read, Peppers manages to nearly make Hubbard miss, though he gets just enough to trip him up, and Hooker, who was playing as a roving safety behind the rest of the defense, springs into action and finishes off the play. It’s a bad play for Peppers, but a well-designed defense from Ohio State.

The fact that Michigan really didn’t do much running without telegraphing the call with personnel was a pretty significant help to Ohio State. The Buckeyes rarely had to defend a run with a numbers disadvantage, because when Michigan planned to run, it put just about every player on the line or in the backfield to do so, freeing up Ohio State to sell out to stop the run. Ohio State frequently and consistently picking up on Michigan’s running plans, and having a solid defense to stop basically all of them is both a testament to Ohio State’s gameplanning, and to some truly atrocious offensive play design for Michigan.

One of the few times Michigan did run out of a formation that could at least threaten a pass, Ohio State again stuffed it, this time through some excellent idividual effort from Raekwon McMillan. McMillan was awesome all game for the Buckeyes, but he especially stands out on this play. Serving in a spy role right behind the line, without any other help in the box, McMillan is Ohio State’s only line of defense against a handoff within at least ten yards, if the line isn’t able to make a play. The draw is well-timed for Michigan, Ohio State’s line is beaten soundly, and everything is set up for a nice gain, but McMillan reads it perfectly.

He gets inside of the center and creates separation with his right arm, while squaring his body to the ball carrier and establishing contact with his left arm. He’s strong enough to separate fully from that center, and has the strength to keep contact with that halfback until he can get his second arm around him and pull him down. This is less of a scheme success and more of an individually impressive play, but a big part of winning at a place like Ohio State is creating opportunities for talented players to make plays.

Against the pass, Ohio State wasn’t able to just throw numbers at Michigan to cause problems, but the Buckeyes did have plenty of answers for everything that Speight was trying to do. On underneath passes, those linebackers that were playing the gaps against the run would drop into short zones to make things easier for those cornerbacks in man coverage. When the ball goes short, even without a defender covering the wideout targeting, there’s a linebacker right there to help out and end the play.

Ohio State used Hooker in the same way when it wanted to blitz those linebackers. With man coverage on the outsides, and two blitzing linebackers up the middle, Hooker and Chris Worley fill those intermediate zones to help out the corners, who are playing conservatively to force passes underneath, and to prevent any big plays without the help of a safety over the top. The blitz gets to Speight quickly, impacts his pass, and Hooker is right there to make the play. He’s lucky to be in the right place at the right time, but it’s a clever way to keep a man blitz from being too risky, and from being susceptible to quick passes underneath.

Later in the game, Ohio State again profits from those underneath zones, this time with Jerome Baker jumping a pass and taking it the other way. Same setup as before, with the linebackers playing the run first but dropping into a zone on pass, and man coverage elsewhere. Speight thinks that he has the outside receiver open, because Marshon Lattimore in coverage is caught on his back hip, but he doesn’t see Baker in time to realize that the pass is actually covered, and that Lattimore is just doing what he’s supposed to, shutting down anything deep or to the outside, forcing the ball inside where the linebackers have clogged the passing lanes.

When done well, and this system is really, really hard to play against, as Michigan showed. Schiano and Fickell did a really good job of creating a defense that was aggressive without being reckless, and that suited its personnel well. These linebackers were tremendously talented and capable of handling a lot of responsibility, and the defensive backfield was just loaded with future first round picks that were able to manage the heavy man coverage workload. Schiano faltered down the stretch as those two groups dropped in talent (along with some other issues, which next week’s film study will get into), but this first defense was really well designed, and really special.