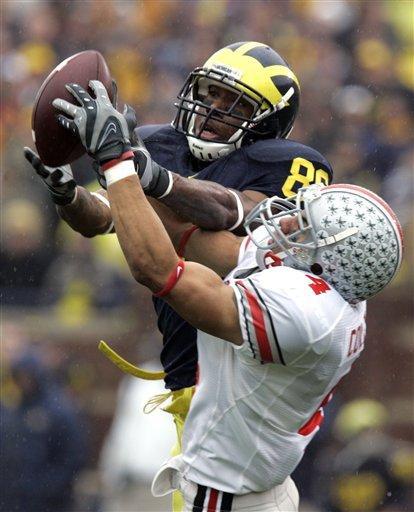 With the return of football up in the air, now serves as a perfect time for reflection on the history of football, and the strategic evolution of the game. To do that, the film study will be spending the offseason looking back at classic Ohio State games. Today’s film study revolves around Ohio State’s 2007 victory in Ann Arbor, 14-3. Video is from this cut-up. Last week’s film study can be found here.

Statistically speaking, Ohio State’s 2007 defense isn’t technically the best of the Jim Tressel era, at least when it comes to points per game allowed. The 2007 unit allowed 12.8, tied for second in Tressel’s tenure with the 2006 defense, and only trailing the 2009 team, which allowed 12.5 (more on them next week). From a star power and dominance standpoint, however, there wasn’t a group under Tressel more loaded than this one, nor was there a group that lived up to the sliver bullets moniker more than this front seven.

Led by the historically underappreciated Vernon Gholston and the dynamic linebacker duo of Marcus Freeman and James Laurinaitis, the Buckeyes absolutely throttled almost every offense they played against, allowing 17 or fewer points in all but two games, both losses, while holding a whopping seven opponents to single-digit outputs. Now, in that list, there are a few teams that were never likely to challenge the Buckeyes, including FCS Youngstown State (38-6); Akron (20-2); Northwestern (58-7); Minnesota (30-7) and Kent State (48-3), but Ohio State also managed to completely lock down No. 23 (at the time) Purdue, 23-7.

The seventh and final performance of this caliber came in today’s film study focus, and while it was aided by some especially cold weather, Ohio State’s 14-3 domination of No. 23 Michigan, on the road, has to be considered one of the most impressive defensive showings not just of the Tressel era, but in the history of Ohio State’s rivalry with the Wolverines. To say that Chad Henne, Mike Hart and the rest of the offense were stifled would be an understatement.

To start, Michigan managed 91 total yards on 61 plays, an average of just under 1.5 yards a play. The Wolverines picked up eight first downs, two on penalties, with four others coming on their lone scoring drive, in the opening period of play. Michigan had 12 drives end after just three or four plays, 10 by way of a punt, one by a missed field goal, and one by a turnover on downs. Just 18 of those 61 plays saw Michigan snap from Ohio State’s side of the 50-yard line and of those 18, 10 came off of drives that started on either the 50-yard line, or on Ohio State’s side of the field.

This kind of domination against a Big Ten opponent, especially one with the caliber of talent that Michigan had, shouldn’t be possible. This wasn’t a good Michigan offense by any means, thanks in large part to Mike DeBord, one of the worst offensive coordinators of all time, but it was still a team that had Henne and Hart, as good a QB/RB duo as Michigan had during the Lloyd Carr era, along with Mario Manningham and Adrian Arrington on the outside, and a line that boasted two-time All-Big Ten guard (2006, 2007) Adam Kraus, future Ohio State star Justin Boren, 2011 draftee Stephen Schilling and, most egregiously, the 2008 draft’s No. 1 overall pick, senior tackle Jake Long.

That group managed just three points, when given 60 minutes and 61 snaps, in front of their home crowd. How in the world is that possible?

A lot of it starts with Henne. He entered the game struggling with a chronic shoulder injury that had plagued him for much of the season, and while he claimed to be good to go for the game, it was pretty obvious very early on that he wouldn’t be much of a threat to Ohio State’s backfield.

For good reason, Michigan tried to obscure that early on, letting Henne launch a deep ball on the first offensive play from scrimmage for the Wolverines, though it ultimately came up short of the target. After an unsuccessful first drive, Michigan was actually able to get the ball moving on its second drive, thanks to a heavy reliance on quick passes and some hesitation from Ohio State to really sell out to stop the run.

With the Buckeyes still at least a bit worried about Henne, Michigan was able to gobble up decent yardage on the ground on its lone scoring drive, including this very nice Hart scamper for a first down, easily his best of the game. Michigan is running one of its base plays, an outside zone with Hart reading the tackle to find the hole. The line is reach blocking to the left, with the right guard serving as the second level blocker looking to take out the backside linebacker, though he falls over, probably preventing a bigger play.

Still, Hart’s cutback creates plenty of room, and Kurt Coleman is forced to clean up in the backfield after Hart clears the first two levels.

This success fades almost immediately, though it isn’t really because of any brilliant scheming from Ohio State, as cornerback Malcolm Jenkins alluded to after the game.

“We just pretty much played our base defense and let our defensive line get after theirs, get penetration and make sure everybody was in their right gap, everybody makes the tackle they’re supposed to make,” Jenkins said. “I think as a whole defense we did a really good job of executing.

“Nothing really changed. We continued to just go at it, line up and play smashmouth football.”

“We just got more comfortable out there,” Gholston said. “We had a lot of young guys up front that really haven’t played in a game of this magnitude. As they got comfortable, their talent was able to show.”

Success in that base defense came, for the most part, because of individual efforts in the front seven, particularly from Gholston.

The Buckeye edge rusher first made his presence felt to cut this drive short, ultimately forcing a field goal after this 2nd-and-long became 3rd-and-impossible. Ohio State is in a very basic man blitz defense here, with linebacker Larry Grant coming off the edge to match Michigan’s five offensive linemen, as the Buckeyes are expecting that tight end off the edge to run a route on a pretty obvious passing down. Alongside Grant, every other lineman is just in a straight rush, nothing fancy, while Freeman plays an intermediate zone, Laurinaitis takes on the fullback in man, and the cornerbacks press the two receivers on the outside, with two safeties overhanging in zone.

This is where you start to see why that base defense worked so well, because even with a numbers advantage in the trenches (six with the tight end against Ohio State’s five), Michigan gets absolutely trashed here. Gholston blows past his made and wraps up Henne through an egregious hold, ending the play before it ever gets started.

This becomes a bit of a theme, as Gholston picks up two more sacks, each in similarly inopportune times for Michigan.

To make matters worse for the Wolverines, he isn’t just used as a pass rusher, either. With Michigan still trying to find any sort of success in the air to back Ohio State off of the line, the Buckeyes break from that base defense just enough to confuse Henne into launching what absolutely should have been an interception.

Ohio State again shows five rushers on a 2nd-and-long, but this time, the Buckeyes get a bit tricky with the actual play call. Gholston drops into a zone right into the flat, underneath Michigan’s receiver to the short side of the field, as the defense shifts into a cover 3 look, with the linebackers, Gholston and a safety filling out that underneath shell, while the outside corners and a deep safety take the deep thirds. Henne reads Jenkins’ drop and immediately goes to hit his quick out, assuming that Ohio State has made a mistake and left the flats open.

Then, during his throw, he spots Gholston, air mails the pass, and throws it straight to Jenkins, who was just waiting to jump on an overthrown pass. It’s a clever design to deploy against a team relying on underneath passes to the perimeter, and it nearly nets Ohio State an interception.

With Henne’s passing issues, Hart’s space has all but evaporated by the third quarter. Ohio State still ran that base defense, but was doing so with linemen and linebackers biting hard on the run, with no real fear of a pass over the top of the defense.

That means, on plays like this one, there’s really nothing that Michigan can do to make space for Hart to run. Michigan goes with a six-man front, though the advnatage quickly disappears as Freeman, Lauinaitis and a cornerback all crash into the backfield on the play side, ending the play before it ever gets started. Michigan’s goal on the ground in 2007 was the spread teams out in the air, and then use that space to blast open holes in the zone running game for Hart. With seven defenders immediately in the box everything Michigan shows run, that sort of approach just wasn’t possible in this game.

The only sort of relief on the ground that Michigan found was when it actually showed a slight threat to throw the ball, with the introduction of freshman Ryan Mallet into the game for the injured Henne. Mallet was terrible, but Ohio State had no real way of knowing that at the time, so the Buckeyes took a slight step back, allowing Hart to pick up one of those two non-penalty first downs after that scoring drive.

As Michigan quickly learned, however, just the threat of Mallet isn’t really enough to keep the dogs at bay, because as soon as he actually threw the ball, missing his wideout by about 15 yards, the secret was out to the Buckeye defense. Several bad incompletions ended this drive, and just like that, the Mallet experiment was over, with Henne returning in the fourth quarter.

He showed very slight signs of life, opening the fourth quarter on the right side of the 50-yard line, but it was a lot of the same for Henne during his return.

This pass was essentially Michigan’s last chance at making something happen on offense, as a completion down the field probably moves the Buckeyes off the line of scrimmage enough to give Hart some room to breathe. However, with Ohio State in a cover 3 again, a lob directly into the middle of the field, with only one receiver deep, probably wasn’t going to ever get the job done. Made worse by a bad underthrow, this never really challenged the Buckeyes, and just gave them a reason to go right back to the aggressive front that had locked down Michigan for the first three quarters. Once Ohio State’s settled down, Michigan never had a chance.

“We didn’t think we were going to be this bad off,” Hart said. “Give credit to the Ohio State defense. They came up with a great game and had a good scheme against us. The defense did a great job.”