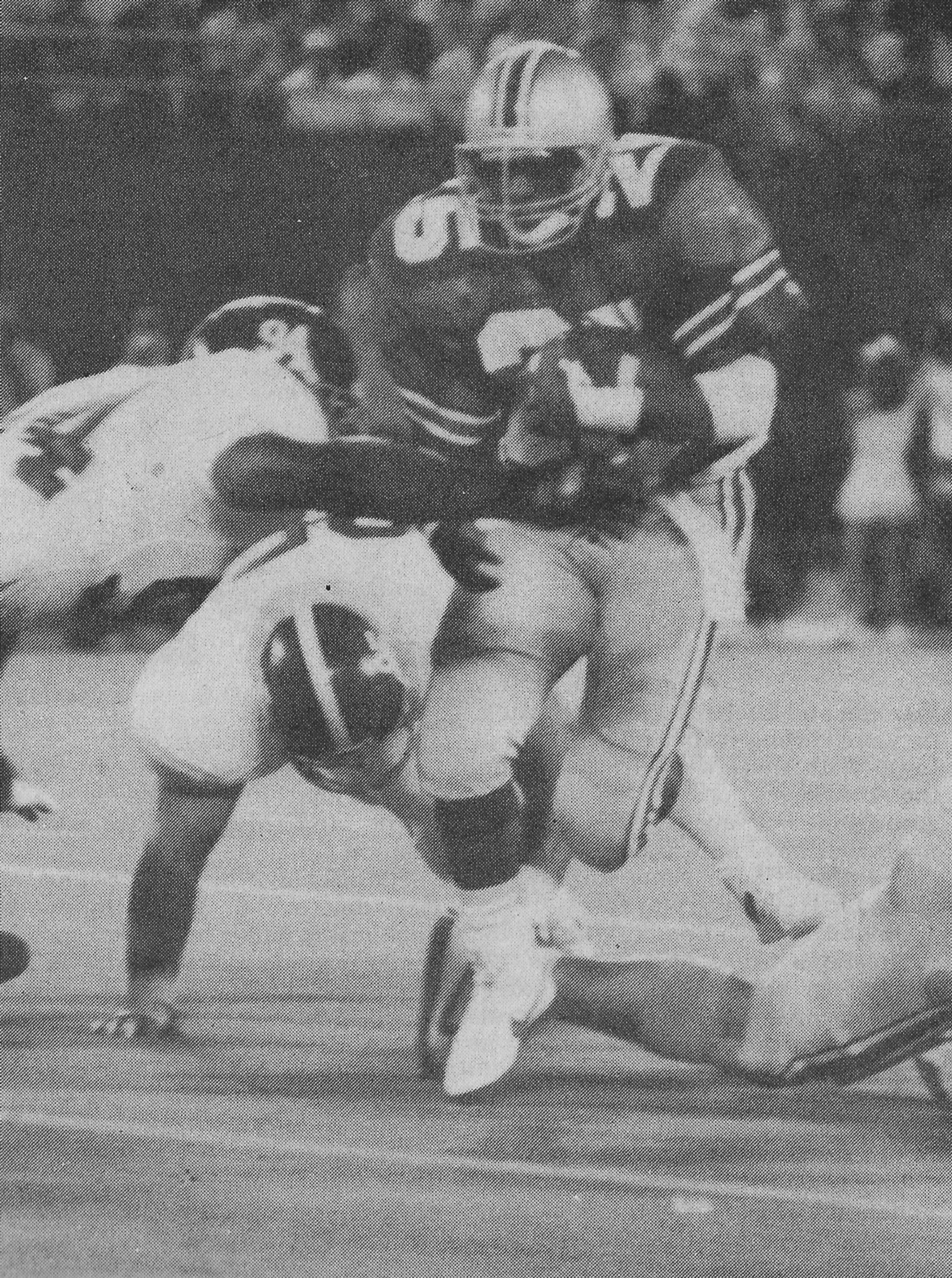 Without Ohio State football to watch this fall, Buckeye Sports Bulletin will be putting together a look back at some of the most consequential Ohio State games of the last 40 years, including a weekly throwback film study. Today’s film study focuses on Ohio State’s 16-10 loss to Alabama in 1986. Video is from this cut-up. Last week’s film study can be found here.

Ohio State had plenty of chances to beat Alabama in the 1986 Kickoff Classic. In front of more than 68,000 fans, the Buckeyes came up just short of knocking off the Crimson Tide, with Jim Karsatos’ final heave to the end zone falling just out of wide receiver Cris Carter’s reach, though that was far from the only missed opportunity that the Buckeyes suffered on the day.

It was a game filled with bizarre mistakes and questionable play calling, specifically for the Buckeye offense. While the Chris Spielman-led defense held up its end of the bargain for the most part, the offense struggled to get into gear and seemed to suffer from the same issues throughout the evening, going back to the same plays that hadn’t worked any of the first five times they tried.

A lot of the problems for the OSU offense could be tied directly to struggles with running the ball up the middle on a stout Alabama front. Ohio State ran the ball 33 times for 133 yards, but struggled with converting on third down (4 of 12 on third-down conversions) even in the short range because of an impotent power rushing attack. Fullback George Cooper was only able to muster 23 yards on five carries and Vince Workman’s 13 carries for 38 yards led the team.

Without a workhorse or a rushing attack to lean on, Ohio State’s offense often seemed lost, playing behind the sticks more often than not and forced to ask Karsatos to throw on obvious passing downs far more often than he would’ve liked. The result: two costly interceptions.

“This is Ohio State,” said Karsatos, who completed 20 of 31 passes for 193 yards. “When we get down there we expect to score. Then, when we make our own mistakes, to kill ourselves, that’s something we’ve got to work on.

“It’s frustrating, but we’ve got to get back to work. We’ve got two weeks before we go to Washington and there’s a lot of things we’ve got to improve on.”

The first of the two interceptions is likely the more forgivable of the two, though both could be tied pretty easily into poor decision making from the signal caller. Ohio State is in 21-personnel out of a traditional I-form, with a curl route on the strong side of the field, Carter running a post on the opposite side and two underneath routes, one from the halfback into the middle of the defense and the second from the tight end off the line into the flats.

This concept was a favorite of Earle Bruce, because it had at least one option for pretty much any defense. Against a blitz or a deep zone, the underneath running back or tight end is going to serve as a quick outlet. If the defense is in cover 2, Carter will have a single safety to deal with on that post. Against cover 3, the curl should hit right in between the two levels of the defense. Even with man, Carter is talented enough to win that matchup with a good throw, and the curl should be effective unless the cornerback is really talented.

All of that hinges on the quarterback, though. Karsatos has to quickly identify which of those defenses he’s looking at, and then make the read based on that. He doesn’t. Alabama is in a shallow cover 4, daring Ohio State to throw underneath and hoping to take away anything down the field. The halfback is wide open by design and the read should be to hit him for a nice, easy completion. Karsatos doesn’t pick that up and instead throws directly into the zone giving Alabama the ball in good field position.

The second interception is quite a bit worse, to the point where it really isn’t worth breaking down everything that went wrong. Made simple: this ball should go literally anywhere else. Just throw it out of bounds. Wind-up and chuck it into the end zone behind you. Anything but this.

While these interceptions certainly hurt the Buckeyes, the passing attack was actually the better half of Ohio State’s offense in this game, thanks largely to Carter, who was pretty easily the best player on the field for most of this game. Ohio State’s best plays usually entailed setting Carter up on a pretty quick hitting route and then getting the ball out to him as soon as he looked back to the quarterback. On this play, Carter is just running a dig route against what looks like cover 3 (apologies, these old camera angles only tell so much about scheme). Because his spacial awareness is so good, he’s able to tuck right into the soft spot of the zone, and Karsatos hits him on-time for a nice gain. Ohio State’s line was beaten badly (the tackles specifically) all game, but these sort of passes to Carter were open pretty much every time he ran a quick route like this.

He was such a dominant and physical athlete that playing man on him was basically asking to be beaten, so Alabama pretty much stuck to zone and he dominated against that too. Because Alabama was so afraid of being beaten deep, Carter made a living on these quick routes into spaces that the Tide couldn’t or wouldn’t cover. Had Ohio State just stuck to this until Alabama was forced to adjust, it’s probably enough to win this game. Carter only having three receptions for 56 yards is the single-most defining stat of the game.

That theme of Ohio State refusing to just take what the defense was giving it applied to the rushing game as well. Ohio State was still very much a power running program at this point in the Bruce tenure, and prided itself on the ability to run up the middle on just about anybody. Because of that, when a defense actually stood up to it, Ohio State pretty much refused to adjust just on principle, because adjusting was admitting that the opponent was equal in talent and physicality, if not outright superior. Alabama’s front was superior.

Pretty much every run up the middle went exactly like this. Alabama loaded up the box for the entire game because the Buckeyes weren’t really threatening to pass to the perimeter, meaning that keeping four defensive linemen and four linebackers on the field every play was perfectly reasonable, if not completely obvious. With such a numbers disadvantage and an offensive line that would’ve struggled against even numbers, Ohio State was never able to establish that power running game.

It was, however, able to make plays off of misdirection with a decent consistency. When the Buckeyes took what the defense gave them on the ground, faking to the inside to keep those linebackers in place before attacking the perimeter, it usually worked out pretty well. This fake to Cooper completely fooled the Alabama defenders in the box and freed up the linemen to work their way downfield for one of the few times in the game. It didn’t create a huge gain, but it was a whole lot better than just ramming your head into a wall 30 times, which was pretty much what Ohio State was doing in running up the middle.

In fact, getting tricky with the misdirection also led to the only touchdown of the game for the Buckeyes. This nifty wideout sweep was easily the most clever call of the game for the Buckeyes and served as a perfect way to attack an overly aggressive rush defense. Unfortunately we don’t have the whole play to breakdown because of some overzealous pre-play camera work, but the gist of the play is that Ohio State packaged two fakes into it, first to Cooper on a handoff up the middle and then again on the option threat to the strong side of the field.

That’s enough to draw just about every defender away from the actual handoff, which goes to Jamie Holland off of some pre-snap motion. The Buckeyes also pull the guard and center to lead for Holland, which gives him just enough coverage down the field to scoot to the end zone. It’s a beautifully designed run and a concept that Ohio State absolutely should’ve gone back to later in the game. If the Buckeyes are a bit more creative and a bit less stubborn in both the passing and rushing attacks, they win this game. The mistakes made things more difficult, but ultimately this was a loss that came about from stale play calling above all else.