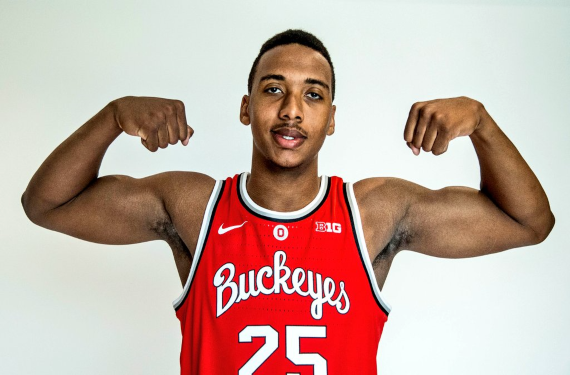 The talented forward told Adam Zagoria of The New York Times he knew he would pick Ohio State since a week ago.

Key helped lead Long Island Lutheran to a New York State Federation Class AA title as a junior, took an official visit to Ohio State the weekend of Sept. 7, canceling visits to Marquette (Sept. 21) and Florida (Sept. 28) while he was at it.

Other schools showing interest in Key included Big Ten teams in Illinois and Rutgers, as well as Providence and St. John’s.

Key is listed as a power forward but his athleticism and versatility allow him to handle the ball and play on the wing.

“I’ll come right in and be a four, maybe a three,” Key said of his role at Ohio State. “Do what I’ve been doing my whole life, footwork, post, mid-range, finishing around the rim. Just be yourself.”

Key is a three-star prospect and the No. 158 overall recruit and No. 31 power forward in the nation. One of the best players in a talent-rich state, Key ranks as the No. 5 player in New York.

“He’s just worked so hard on his body this offseason,” LuHi coach John Buck told Zagora. “He’s come such a long way in six months that if he keeps working at it, there’s a reason why so many high-major kids are now on him after this summer. I think he can play with anyone in the country if he continues to work.”

Key is Ohio State’s second commit in 2020 following shooting guard Eugene Brown III. The Buckeyes remain in the mix for several other players, including Montverde (FL) Academy wing Scottie Barnes, who is set to visit Ohio State on Oct. 4.

The roster is pretty full, however, and the Buckeyes will only lose Andre Wesson to graduation and potentially his brother, Kaleb, to the pros.

Beyond his commitment, Key is locked in on bringing more success to Long Island Lutheran. He told Zagoria that he wants to “win another state title with LuHi and obviously go undefeated.”