The Last Time Ohio State Football Was Delayed Due To Non-Football Circumstances: Sept. 15, 2001 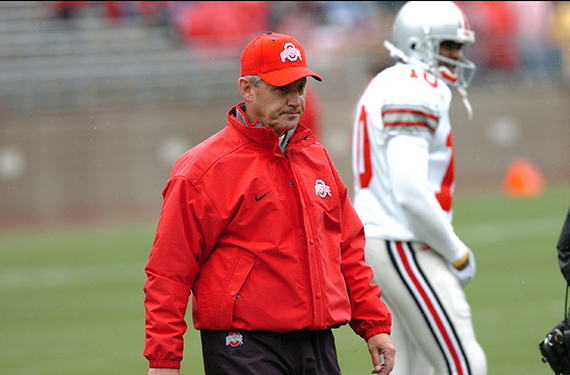 With ongoing talks and concerns about the upcoming college football season due to the spread of the coronavirus, Buckeye Sports Bulletin went back 19 years to the last time Ohio State had a game changed due to circumstances much larger than the game of football.

The Buckeyes were ready to host San Diego State on Sept. 15, 2001 for the first time in the two programs’ histories, but — on the Tuesday before it — everything even close to resembling football was put on the back burner as planes crashed into the World Trade Center, Pentagon and into a field near Shanksville, Pa.

Those Sept. 11 attacks, that killed nearly 3,000 and injured 25,000 more, led to the cancellation of major sports across the country, including that week’s slate of college football games.

Instead, Ohio State held a memorial service at the stadium that Saturday, a “Show You Care” rally that helped raise over $650,000 for families of lost ones due to this national tragedy.

“There was a memorial service held at the stadium that afternoon. And I suppose there was 15 to 20,000 people there,” Ohio State historian Jack Park told BSB. “It was very, very somber. For instance, if you went to the stadium, the concessions or nothing like that was open. You know, they weren’t selling hot dogs, they weren’t doing things like that, it was just people there to remember what had happened.”

The game against the Aztecs was scheduled to be the second for newly named Ohio State head coach Jim Tressel, who instead followed up his debut win against Akron with a trip across the country against UCLA on Sept. 22, which ended in a 13-6 loss for the Buckeyes.

Park said that the tragic events the week prior led to an overall fear of travel, and was the cause of many Ohio State fans not making that trip to Pasadena, Calif.

“That was Jim Tressel’s first road game. We lost a game out there,” Park said. “There were a lot of people planning to go to that game. And it was a big trip, you know, go out and play UCLA, and many of the people did not go because they didn’t want to fly.”

As for that San Diego State game, once football became important again, the Buckeyes and Aztecs had a matching off week later in the 2001 season, and moved the matchup to that week, on Oct. 20. Ohio State won that game 27-12, scoring 21 unanswered points in the second half and forcing five turnovers.

It’s impossible to know what college football will look like in 2020, but, just like on that fateful day in 2001, there are things that trump the importance of sports.

“If Ohio State didn’t have a football season, just think of the economic impact on Central Ohio. I mean, the hotels, the restaurants, just the food that gets sold for tailgate parties, you know?” Park said. “And if you think of an athletic budget, the size of Ohio State’s and, I don’t know, there’s just so many things that never have been thought of before.

“Do I think there’s a possibility there’ll be no football season? I really do. I mean, you think today we’re wanting to keep everybody so separated, and to put 108,000 people shoulder to shoulder in Ohio Stadium in just a little bit over four months, is, you know, it’s something that it’s hard to know. It’s just really hard to know.”

To read the full story on the times that Ohio State missed football games from non-football circumstances, as well as more on the week of Sept. 11, you can find it in the upcoming print edition of Buckeye Sports Bulletin. For four free issues, no card required, sign up at the link here: http://www.buckeyesports.com/subscribe-4issue-trial/