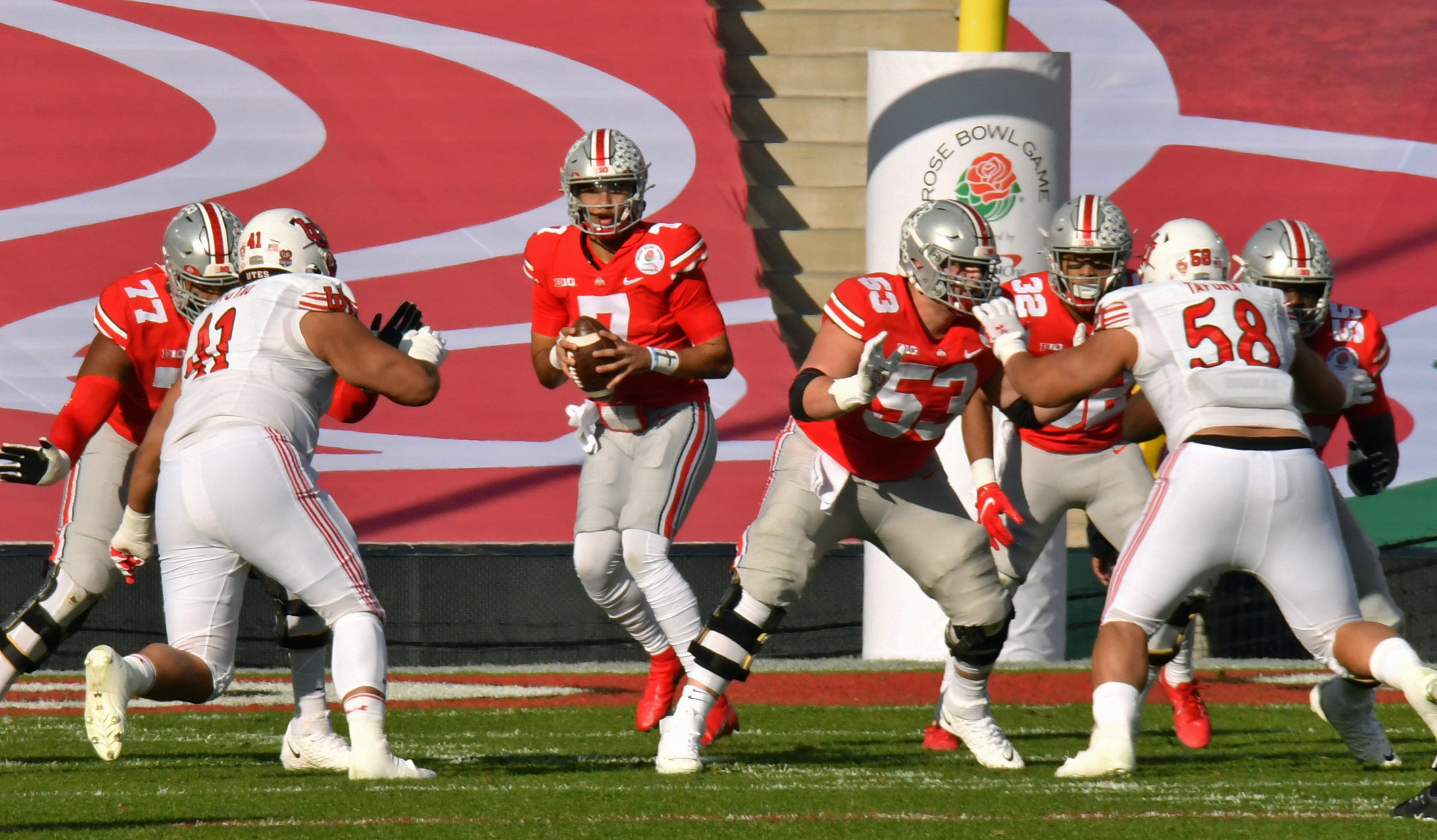 The main attraction at Ohio State’s March 23 pro day for many of the NFL scouts, coaches and front-office staffers in attendance won’t be draft-eligible for another season.

Working in tandem with former Buckeye quarterback Cardale Jones to provide passes for Chris Olave, Garrett Wilson and other Buckeyes who are headed to the professional ranks this year, incumbent quarterback C.J. Stroud seemed to draw just as many eyes as his former teammates with a litany of dazzling deep balls. During the session, ESPN draft analyst Matt Miller tweeted a quick quote from an evaluator he spoke to on the sidelines about the player who most drew his attention. His answer?

For Stroud, the attention wasn’t exactly unexpected. The 2022 class of quarterbacks is considered weaker than usual, and though a few members of it – namely Liberty’s Malik Willis, Pitt’s Kenny Pickett and Matt Corral of Ole Miss – are expected to contend for first-round spots this season, many of the league’s most quarterback-hungry teams appear to be looking at this season as a sideshow to the main attraction a season from now.

There’s another season to be played for that group, but in March of 2022, it’s a two-man main event at quarterback in 2023 – Stroud, and Alabama’s Bryce Young. Just two years ago, the two were signing on with their prospective schools and the No. 3 and No. 1 quarterbacks respectively on the 247Sports recruiting rankings composite. Now, with a year left to play, they’re already jockeying for positioning.

But for Stroud, the chance to throw with his old teammates was no high-pressure situation. In fact, he told gathered reporters that he could hardly sleep the night prior out of excitement.

“I can do nothing but just thank (my teammates) for just letting me do this with them,” Stroud said. “I was excited. I damn near didn’t sleep last night. When you build a connection with them, I wouldn’t say it’s like second nature… but it definitely is second nature. People said I did a decent job. I want a couple of the throws back, but I feel like we had a decent day.”

After he concluded his time on the field, Stroud drew quite the crowd from the NFL personnel in attendance. He spoke at length with representatives from several teams – including Tennessee Titans head coach Mike Vrabel, who has plenty of familiarity with the Woody Hayes Athletic Center where the Buckeyes performed. Not that the California native was ever lacking for confidence, but the reception confirmed for Stroud his ability to perform at the kind of level that will almost certainly see him hear his name early come next year’s draft.

“It just shows me that I’m able to do this,” Stroud said. “I have the God-given talent. I think I was a little nervous at first, but after you let that first ball go, you’re back to doing what you did since you were a kid. So I think that’ll just catapult me to next year and make me feel a lot more comfortable and better.”

Despite all the intrigue and excitement around Ohio State’s signal-caller, that walk onto the draft stage is still at least a year away, and Stroud did reinforce that he has yet to declare for anything – though he did cede that he’s entering what will in all likelihood be his final season in Columbus. He’s a Buckeye for at least one more season, and for that, head coach Ryan Day is immensely grateful.

“At this point last year, (C.J.) hadn’t thrown a college pass and now he’s got a whole year under his belt,” Day said. “You’re kind of learning what to do, and now you learn why you do it. It’s a little bit more of a deeper understanding of things. There’s a little bit of a Rolodex of plays under his belt. We’re going to look at some new concepts to some things that he can handle and maybe put a little more on his plate on the line of scrimmage and different things there. We’ve only had one other time like this, and it was with Justin (Fields). It is exciting going into the season having somebody who’s played a whole year under his belt.”