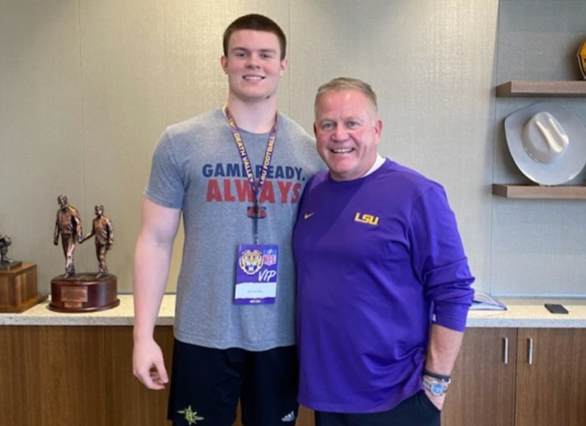 Markway is the No. 100 overall prospect and No. 7 tight end in his class, and held offers from over 30 schools. He was previously committed to Florida, but decommitted this past December.

Ohio State had been involved with Markway, offering him last March and among his most recent top seven along with Alabama, Florida, Iowa, LSU, Missouri and Notre Dame before his first commitment to the Gators.

Following a visit to LSU earlier this month, predictions flooded in on 247Sports for Markway to commit to the Tigers, with 11 predictions coming in over the past few days.

“I just love what they’re building there with Coach (Brian) Kelly and Coach (Mike) Denbrock coming together again,” Markway told 247Sports after his visit. “They both love the tight end position from Cincinnati and Notre Dame and they’re telling me how they’re going to use them and feature them and they’re going to be the focal point of the offense for sure.”

With Markway committed, it leaves Ohio State with one tight end commit in the class: Thompson’s Station (Tenn.) Independence four-star Ty Lockwood (6-5, 223), who has been committed since last August.

Ohio State is looking to take two tight ends in this class, which leaves Folsom, Calif., four-star tight end Walker Lyons (6-4, 230) as the next priority target for the Buckeyes. Ohio State has offers issued to just 10 tight ends in 2023, with six (including Lockwood) already committed to a school.