‘I Feel A Lot More Comfortable:’ Stover All In On Move Back To Tight End 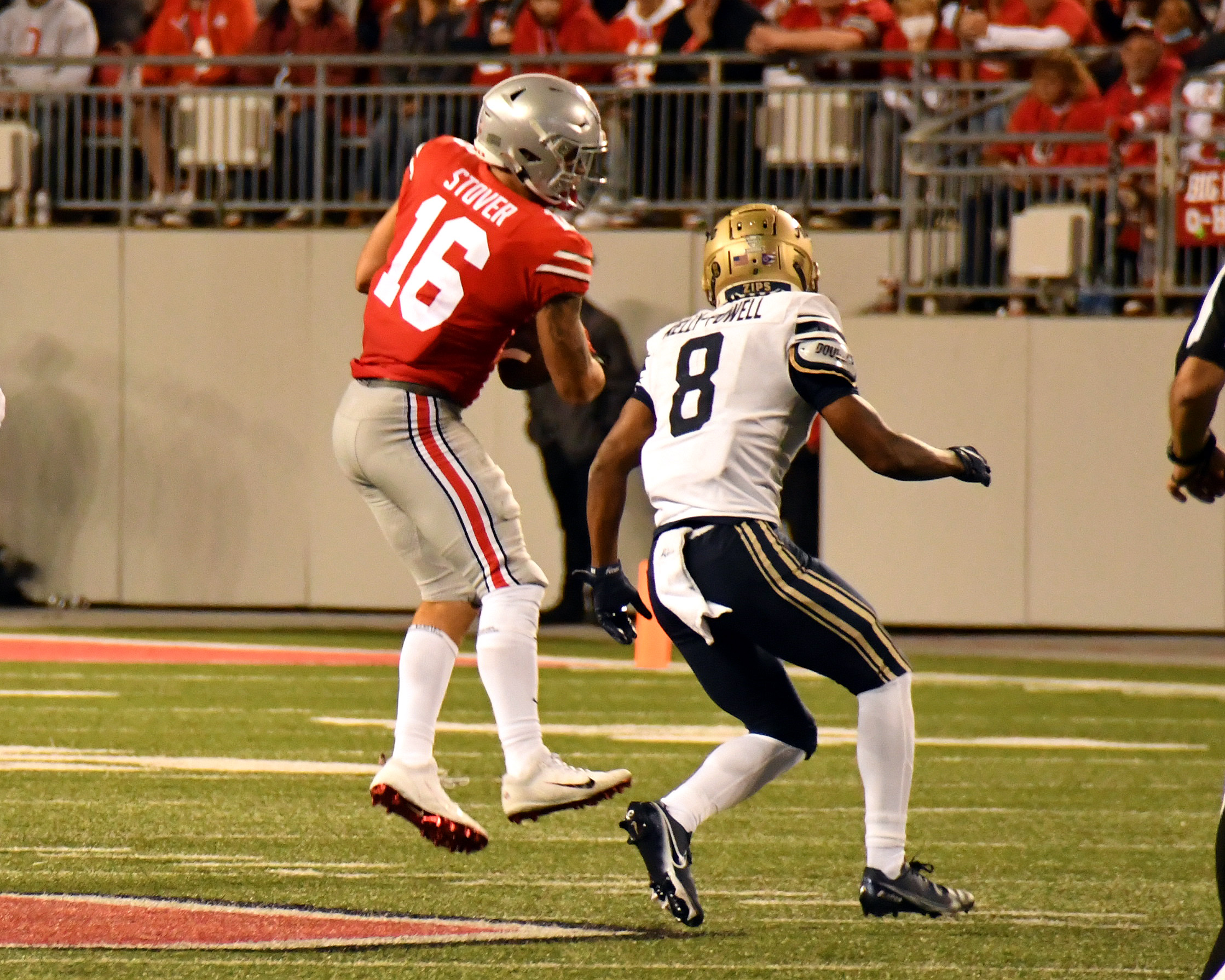 Ohio State football finished its sixth and seventh spring practices earlier this week, and it appears that Cade Stover’s positional carousel made its final rotation.

The former Mansfield (Ohio) Lexington High School four-star recruit who came to Columbus with an All-American pedigree at linebacker won’t finish his collegiate career on defense. Instead, he will look to impact the Buckeyes’ offense, bringing a new mentality to the tight end position this fall.

On March 29, head coach Ryan Day and offensive coordinator Kevin Wilson wouldn’t call Stover’s latest position change permanent and thought he could make another move back to defense if he chooses that as his path. Still, they made one thing abundantly clear. Whatever happens, the Buckeye coaches want Stover to become comfortable in his role, claiming that having one position will help his development.

“Now that he’s a veteran in the program, he has a voice, and we want to put them in the best position to be successful,” Day said. “There’s always been conversation about it, and now that he’s been there for a couple of practices, we’ll continue to talk about it. But he needs to focus on something for a while in order to be successful. We can’t keep bouncing around.”

Still, Stover felt he needed to take one more shot at linebacker, claiming he wanted to decide where to play with clear eyes and a full heart. Stover offered a clear response when asked if he would’ve second-guessed his decision had he not taken more reps of defense.

Stover will face competition for playing time at tight end, as Joe Royer and Gee Scott Jr. are also in the mix. However, they are both undersized for an in-line blocker. On the other hand, Stover has the body type the Buckeyes desire for the position.

“I think he has the skills to be very, very good,” Wilson said. “I probably have more respect for him after he went to defense. The way he played defense and worked out in the winter. He became one of the premier leaders of this team with the way he approached our workouts and all that.”

Stover looks poised to step into a more hands-on role in the offense with the coaching staff’s support. Ohio State isn’t known for significant tight end usage in the passing game, but Stover’s frame and toughness will make a vital part of the Buckeyes’ rushing attack — an area of the offense that could use improvement this fall.

He’ll do that by bringing a defensive tenacity to the offense. That mentality has changed his circumstances through the first weeks of spring practice, as Stover called his performance in drills, scrimmages and workouts a “night and day” difference from last season. Because of that improvement, Stover said Day and Wilson trusted him with more responsibility.

“I feel a lot more comfortable,” Stover said. “Down the road, if you look at tight ends and the way I move, that’s what tight ends do. I don’t know how many people love a 6-4, 260-pound middle backer anymore. Over there, I had a good time on defense, and I love playing defense. I’m trying to bring what I did on defense over to the offense, and so far, I’ve done that, and I’m a lot happier.”

Stover said he feels like Ohio State’s offense allows him to turn loose with his current frame. He wants to use his balance, leverage and strength to put opposing defenses on their heels.  As for the other team’s players, he wants to put them on their backs.

Wilson said he’s looking forward to seeing Stover’s physicality on the Ohio State front. However, he recognized that Stover has much to learn to establish techniques that will make him a more versatile threat than a one-trick pony.

“My thought if he came back (to the offense) was I wasn’t going to tie his hands,” Wilson said. “I was going to try and get him to play with the energy and passion that he likes on defense. But we have to play under control. We can’t be reckless, and we have to have some fundamentals. But I’d also like for him to play to his strengths.”

Wilson indicated that Stover hasn’t waved the white flag toward any future direction in the program. He admires Stover’s desire to win and compete for his teammates with each opportunity. In fact, Wilson advocated with Day and the remaining coaching staff that Stover become an Iron Buckeye. The coaches offer the award to players they believe took the most significant steps of growth in the offseason.

Stover said he prides himself in his hard work. While he might not have been as highly-touted a recruit out of high school or a first-round talent at his offensive or defensive positions, Stover wants to continue working hard until his time with Ohio State ends.

In his fourth year with the Buckeyes, Stover could have been easy to slip through the cracks — especially since he changed positions four times in a little over three seasons. However, Stover thinks his work ethic on and off the field will keep him in the lineup in the future.

“In my mind, I’ve always prided myself on being the hardest working and toughest guy out there,” said Stover, who has three years of eligibility remaining. “If you have that, it’s hard to slip through the cracks. That’s what I’ve tried to do, and to be around everybody here has contributed to that tremendously. I love these guys here, and I think I found where I need to be here for this team and me.”

Fellow tight end Mitch Rossi would agree with his sentiment, calling Stover a refreshing presence that provides surrounding players with an edge from toughness and grit. He also hinted that if everyone adopted Stover’s mindset last season, the Buckeyes might have made themselves a more formidable team come November and beyond.

“I love having Cade around. He brings great energy, and he’s a tough dude, and he’s a leader,”  Rossi said. “I think that Cade brings an edge and a toughness that we need and something that maybe at times last year we needed. We needed a little more edge to us at times.”

Stover said he would continue having constant communication with Day and Wilson about how he can contribute to Ohio State’s success. He admitted that those coaches had a sales pitch for him to play tight end this fall, but the decision to return to that position ultimately laid in his hands, which allowed him to keep his best interests in mind.

“They’re good people,” Stover said. “They always have been, and that’s why I am still here. That’s why people stay around this place because you’re around good people.”