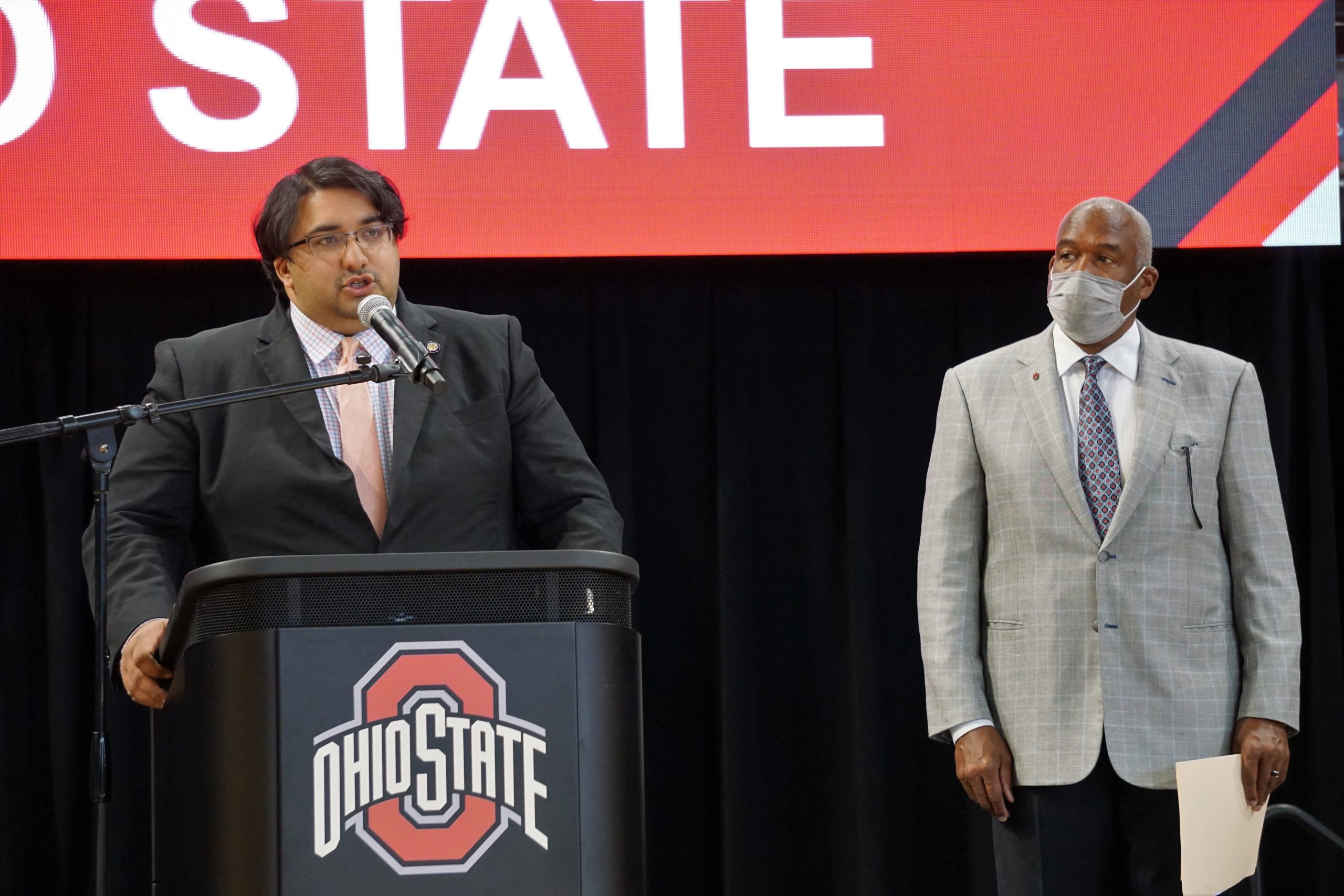 State Sen. Niraj Antani (R-Miamisburg), along with Ohio State athletic director Gene Smith, spoke at the Covelli Center Monday to introduce a bill that will allow student-athletes in the state of Ohio to profit off their name, image and likeness.

Antani said it is a standalone bill, and was introduced immediately following the press conference, and that, if passed, it will be effective starting July 1 of this year. It will be introduced at the senate’s next non-voting session.

“Students have inherit right to their name, image and likeness,” Antani said during his opening statement on the bill.

In his time at Ohio State, where he went to school from 2009-13, Antani said he saw student-athletes struggling to get by, even the biggest names, and even those that were under scholarship to play sports at the university. He also said this has become possible because of the momentum across the country with states trying to get NIL bills done.

According to Antani, 16 states have legalized NIL for student-athletes, five of which go into effect in July. He also said Ohio is one of just 11 states that did not have any step toward legislation prior to the bill being introduced Monday.

Smith said in the press conference that he is hopeful that the bill will be implemented prior to the start of July and that he has embraced “the thought and idea of our student-athletes having this opportunity.” He also said he is hopeful that the NCAA Division I Council will pass national legislation in its meeting next month on June 22.

“The reality is teaching our young people how to actually engage an endorsement opportunity,” Smith said. “I embrace it as an educational opportunity.”

Antani made it clear that this will help all student-athletes, stating that not everyone will get deals with major brands like Coke and Nike, but instead will get deals at their home cities with local companies. The example Antani gave is former Ohio State center Josh Myers, who is from Antani’s hometown in Miamisburg, who is a “local hero” there and could have benefitted from this NIL legislation at various places in the city.

Smith also emphasized this point with a different angle, saying he believes Olympic athletes will possibly benefit more from these changes than student-athletes in football or basketball.

Both Antani and Smith admitted that there may be some chaos with state legislations being passed at different times and with different verbiage in the laws, they both said it is still important to get it passed to help benefit the student-athletes. Smith compared not getting this passed because of the potential chaos to only making legislation toward the one percent, and emphasized again that he is hopeful the NCAA will pass legislation nationally to help mitigate that.

When asked if he believes he has the votes to get the bill passed, he said he’s going to “work very, very hard” to try and get them.

If it does not pass and states like Alabama, Georgia and Florida do allow student-athletes to profit off NIL, Smith said he would be concerned, “not just at Ohio State, but for all schools in the state of Ohio.” But, Antani said with a smile that the bill will be passed.

While there were no student-athletes at the press conference, Smith said the ones he has spoken with are very excited and are already coming up with a number of ideas.

To highlight this, Smith said that there will be a “number of student-athletes that will change their families’ lives” from this bill getting passed.

To read a copy of the proposed legislation click here:Download