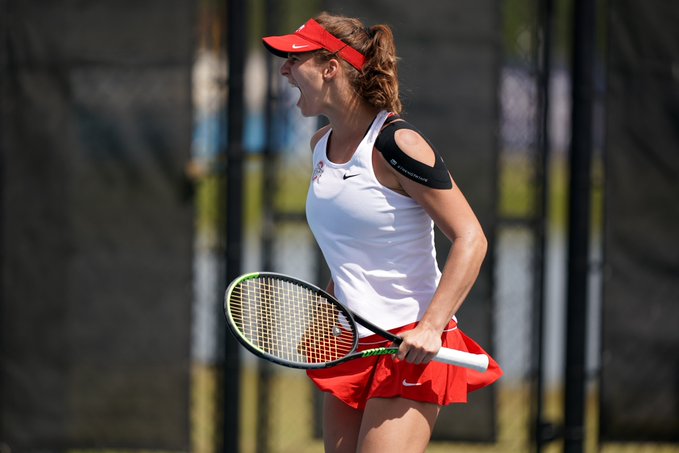 The weeks are getting thinner and thinner around Ohio State as the university approaches the long summer, with just a few teams and players left to compete this semester. Both tennis teams saw individual players compete, the men’s golf team took to the links, and the baseball team is still rolling along, but just about everything else is coming to a close for the summer in Columbus.

To start with the worst news of the weekend for the Buckeyes, it’s looking more and more like a lost season for Greg Beals and the Buckeye baseball squad. Ohio State has one game left in a four-game series against Nebraska and Indiana (two games each), but dropped both matchups with the Cornhuskers and will need to topple the Hoosiers on Monday just to break even for the weekend.

With just one series left in the regular season, the 20-18 Buckeyes would need a miracle to play extra games into June.

To open this weekend’s set of games, Ohio State fell in devastating fashion to Nebraska, 11-9, despite a 9-2 Ohio State lead in the sixth inning. Nebraska scored five times in the seventh inning and four times in the ninth to take the way, finally breaking through as soon as Seth Lonsway left the mound after a quality start. From the bullpen, Bayden Root faced six batters, walked a pair, allowed two hits and surrendered five runs; Jack Neely faced 10 batters and allowed three runs; and TJ Brock allowed one more run.

Game two wasn’t much better for the Buckeyes. After a five-run first inning, Nebraska cruised to a 9-0 win, teeing off on Will Pfennig for 10 hits and eight runs in four innings of work, before Tyler Kean managed to shut things down for the most part, allowing one run in four innings, while surrendering three hits and one walk, with one strikeout.

Ohio State finally got on track in game three, the second half of Saturday’s double header and its first game against the Hoosiers. Garrett Burhenn pitched a gem, going all nine innings and allowing just seven hits and one run, while striking out 11 without walking a single batter. Brent Todys batted in two of Ohio State’s three runs for the game, on a single in the fifth inning.

Ohio State’s foray into the NCAA Singles Championships was short lived, as both John McNally and Cannon Kingsley bowed out in the first round of the tournament.

McNally drew No. 1 ranked Liam Draxl of Kentucky for his opening matchup. He took the first set 6-2, but fell 6-1 in the second, forcing a deciding third set. That set would go all the way to a tiebreaker, which McNally led 4-1, but six straight points for Draxl ended his season. McNally finished at 23-6 on the year.

Meanwhile, Kingsley lost his second match of the year, this time to North Carolina’s William Blumberg, 6-4, 6-4. The Big Ten Player of the Year, Kingsley finishes his sophomore campaign at 27-2.

In the women’s NCAA Singles Championships, Ohio State’s lone representative, Irina Cantos Siemers claimed a straight set win against North Carolina’s Cameron Morra, winning the first set 6-2, featuring a pair of breaks in winning the final three points, and claiming the match with a 6-3 second set. After Morra cut the deficit down to one at 4-3, Cantos Siemers broke and held to claim victory.

It’s a tough draw in the second round for Cantos Siemers, ranked as the No. 18 player, will square off with the No. 7 seed Abigail Forbes from UCLA on Monday. Forbes beat Chloe Beck of Duke in straight sets in the first round. Ohio State will also partake in the doubles tournament starting on Monday, featuring No. 50 Isabelle Boulais and Kolie Allen against No. 2 Sara Daavettila and Morra from North Carolina.

Ohio State finished at No. 6 in its NCAA regional, one spot and two shots short of NCAA Championships qualification, as the top five teams advance. Ohio State’s 7-under par performance for the event wasn’t enough to topple TCU, which shot 9-under par and finished in that final qualifying spot, ending Ohio State’s team season.

Star freshman Maxwell Moldovan starred again for the Buckeyes, leading the way at 3-under par for the event, good enough for 17th place. Jackson Chandler shot 2-under par and finished in 19th, while Elis Svard shot one-under and finished at No. 21. Moldovan finished his first season at OSU with a 71.50 scoring average, food enough to tie Chris Wollmann’s record for the lowest average since 1980 at Ohio State.