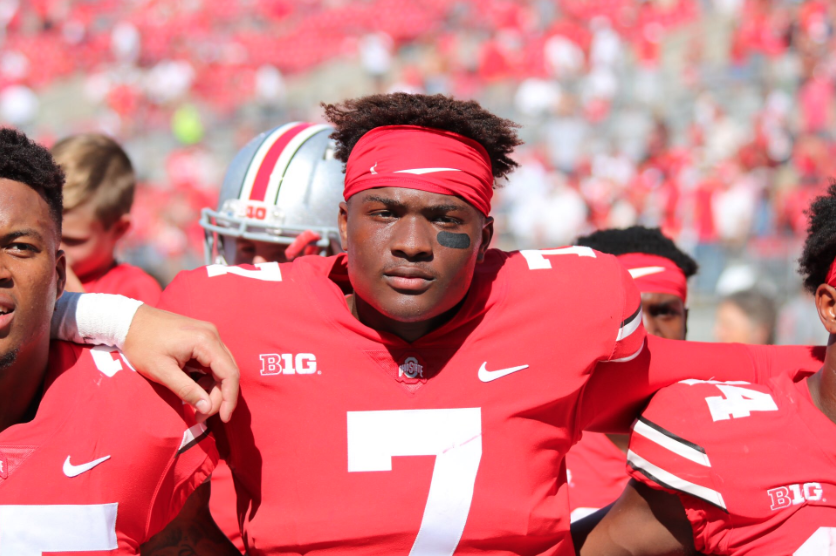 The Buckeyes and Terrapins are set to kick off at Noon at Maryland Stadium while the game will be broadcast on ABC.

Going into the contest, the BSB staff took a stab at predicting the outcome. Here’s what they had to say:

The Buckeyes might have resolved some concerns pertaining to their inability to stop the run, and it could be pivotal to their success against the Terrapins. With starting quarterback Kasim Hill suffering a season-ending injury last week, Maryland will need sophomore Tyrrell Pigrome to apply pressure to the Ohio State defense through the air and on the ground.

Maryland will rely heavily on freshman tailback Anthony McFarland, who is coming off a 210-yard performance at Indiana and averages about 7 yards per carry on the season.

The Buckeyes bring the country’s No. 3 passing offense (354.9 yards per game) to College Park where the nation’s No. 18 pass defense (181.8 yards allowed per game) awaits. The Terrapins have shut down opposing passing attacks all season with no teams surpassing 300 passing yards in a game and have held three teams below 100 yards. Dwayne Haskins attended high school in Maryland and was once a Terrapin commit. The best quarterback in the Big Ten will get back on track in a victory for the Buckeyes.

Ohio State still hasn’t impressed me since the Penn State win, a game that took place nearly two months ago and has lost some of its weight after the Nittany Lions were blasted by Michigan.

The Buckeyes still have a long way to go on offense while the defense might have hit its stride with Brendon White at safety next to Jordan Fuller. OSU is getting healthy in the secondary, which will be crucial to its success moving forward. With Maryland forced to start backup quarterback Tyrrell Pigrome after Kasim Hill’s ACL injury, Ohio State’s secondary doesn’t figure to face much of a test.

Playing against the team that he once committed to, I expect a big day from Dwayne Haskins and the pass game, especially since the weather is supposed to be much more favorable than it was in East Lansing, Mich., last week. I think White will be tested in the secondary as the new guy, but I expect him to rise to the occasion and maybe even come away with an interception.

Last week I predicted that Ohio State would lose to Michigan State if the Buckeyes struggled to run the ball. That’s what I expected to happen, but the Buckeyes ended up rushing for over 100 yards and coming away with a 20-point win.

This week, I’ll make no such declarations because I expect Ohio State to dominate in every facet of the game. The team seems to have been galvanized by some of the off-field distractions, and the defense is hitting its stride at the perfect time. A matchup with Michigan is looming, but an easy win over Maryland should provide a boost.

I expect Dwayne Haskins to have a big day – he’ll break the single-season Ohio State records for passing yards and passing touchdowns in this one – while both Mike Weber and J.K. Dobbins will roll.

On defense, expect Maryland native Chase Young to have a big day – especially against the run – and look for Brendon White to get the first interception of his career.

If you watched Ohio State at Michigan State, you know that the Buckeyes’ win over the Spartans wasn’t without its flaws. OSU needed a pair of non-offensive scores to get going and pull away from MSU, but the result ultimately gave it a much-needed boost of confidence.

Urban Meyer made sure to underline that after the game. He knew his team had more to work on, but Ohio State left East Lansing, Mich., with a restored sense of swagger that the past two months have generally lacked.

Before the Buckeyes host Michigan for a de facto Big Ten East Division title game next Saturday, they get their perfect opponent in Maryland. The Terrapins have talent, particularly on offense, forcing OSU’s defense to double down after its outing against Michigan State.

With the Terps on the precipice of bowl eligibility, I expect the home team to come out and put up a fight on senior day in College Park. At the same time, Ohio State has the momentum it needs from its victory over the Spartans.

The result of that game clearly had no bearing on what the College Football Playoff committee thinks of the Buckeyes, but they have their confidence now and I expect them to take it in stride ahead of The Game. Action might be slow to start, but OSU can really make a statement on both sides of the ball here.