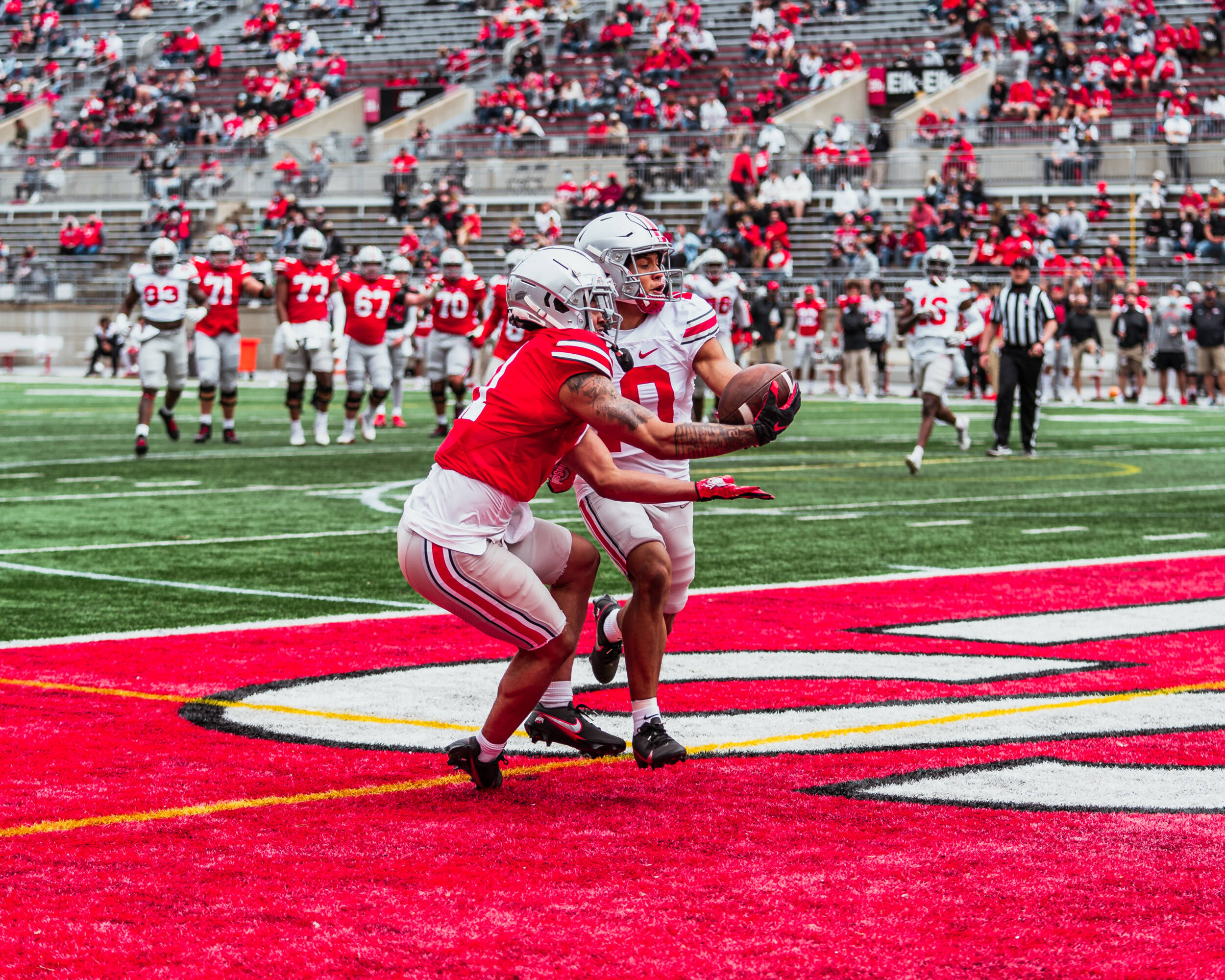 With Justin Fields watching, the quarterbacks working to replace the NFL-bound Buckeye signal caller made their case at Ohio Stadium in the team’s annual spring game.

“Some good, some not so good. A lot of learning opportunities there,” head coach Ryan Day said. “They’ve learned a lot. Now, the race is on over the next several months over who can make the most strides.”

Day previously told the Big Ten Network that he wouldn’t have a starting quarterback coming out of Saturday’s game, but C.J. Stroud made perhaps the most impressive statement. Based on the way snaps were divided up in 2020, he was considered the frontrunner going in, and the redshirt freshman told BTN that he added 10 pounds of healthy weight in the offseason, helping him to feel more fit than ever.

During the first half, in which the quarterbacks rotated teams, but there was a running clock and Team Brutus squared off against Team Buckeye, Stroud completed 11 of 15 passes, threw for 127 yards, 2 touchdowns and a quarterback rating of 188.5. He also avoided any sacks on a day when it was enough to merely touch the quarterback in order to stop the play.

Stroud’s longest pass of that half was a 40-yard throw to Chris Olave.

True freshman Kyle McCord posted some impressive first-half numbers as well. He was 9 for 13 throwing, recorded 130 yards and threw a beautiful touchdown pass to Jaxon Smith-Njigba.

Finally, redshirt freshman Jack Miller was 12 for 23 for 100 yards. He had a particularly tough stretch when he threw a ball that defensive back Ryan Watts picked off, followed by three straight incompletions on the next series– albeit one of those was a rare drop by receiver Chris Olave.

“I feel very comfortable with all of them,” said senior offensive lineman Thayer Munford. “Whoever is going to be behind us in the fall is going to do tremendous.”

Catching a glimpse of the future

With the game’s pass-heavy action, the young Buckeye wide receivers also had an opportunity to shine. Leading the team in first-half receptions were true freshman Marvin Harrison (7) and sophomore Jaxson Smith-Njigba (5). Harrison had 49 receiving yards, Smith-Njigba had 50, true freshman Emeka Egbuka chipped in 45 yards on 4 catches.

“I do think the young guys have had a great work ethic. They have a great mentality and approach,” said Day. “A bright future there, I think.”

Junior Garrett Wilson demonstrated the ability that made him the team’s second-leading receiver a year ago with 85 yards on 4 receptions, but he also had a moment that had Ohio State fans holding their collective breath.

He stayed down and was tended to by the OSU medical staff before he caught his wind and was able to jog off while raising his hands to the small crowd, which was limited due to COVID-19 protocols.

There was yet another young player with a dazzling performance. In the first half, before Ohio State went to a scrimmage between the offense and defense, freshman Jack Sawyer had three tackles, two sacks and a forced fumble.

“Off to a great start, for sure,” confirmed Day. “He’s learning more and more. He’s working his way up the depth chart. Jack in particular came in with a lot of confidence, and he’s made a lot of plays. What you saw today is pretty much every practice.”