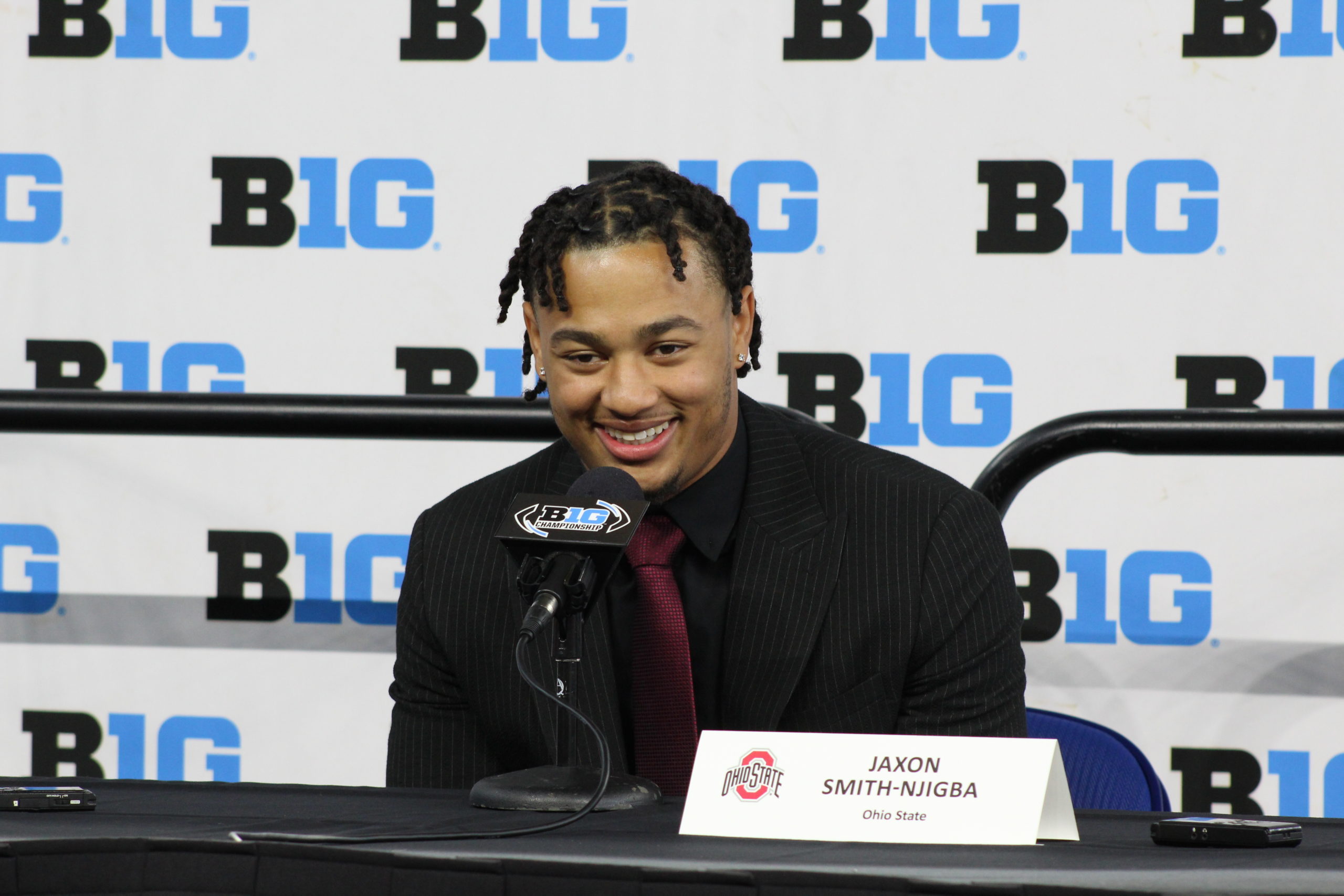 Jaxon Smith-Njigba set the world on fire for the Ohio State football team in 2021, but was aided by playing behind two NFL Draft first-round selections in Garrett Wilson and Chris Olave.

This season, Smith-Njigba steps into the feature role in the Ohio State passing game with sky-high expectations for him to produce. With Wilson and Olave out of the picture, Smith-Nijgba said his focus is on preparing to be the Buckeye opposing defenses key on.

“Every offseason I always try to get bigger, faster and stronger. I’ve been getting into the room with coach [Brian] Hartline and going over some stuff,” Smith-Njigba said on Wednesday at Big Ten Media Days. “I feel like the game has just slowed down. I feel like after the last game of the season, I’ve taken the time to recap and I feel like it slows me down and slows the game down. I feel like that will be a big advantage for me going into this year.”

While Smith-Njigba will be the everyday top-option in the Ohio State passing game in 2022, the Buckeyes have already caught a glimpse of what he can do in an increased role. As Wilson and Olave decided to sit out of the 2022 Rose Bowl, Smith-Njigba etched his name in the game’s record books. He collected Rose Bowl records in receptions (15) and receiving yards (347) while tying the receiving touchdown record with three scores.

As Smith-Njigba has already shown he can excel in a feature role, he said the elevated responsibility will force him to be more inventive in how he approaches the game.

“You have to be creative, I feel like that’s how you stay the best,” Smith-Njigba said. “Coach Hartline does a great job with that, in preparing me and showing me. Coach Keenan Bailey helps with that too. It’s fun to work on because I love the game and I love to learn something new and I feel like my mind is always working too.”

Alongside Wilson and Olave, Smith-Njigba broke the single-season Ohio State record for receptions (95) and receiving yards (1,606) as the primary option out of the slot for quarterback C.J. Stroud.

As Smith-Njigba emerged forged a strong connection with Stroud on the field, the third-year quarterback said the pair’s relationship has grown immensely since they were recruited by the Buckeyes.

“Right when we got to school, we had a good connection. To this day, he’s one of my brothers, one of my best friends,” Stroud said. “We just match well together, we get each other. I definitely think the stuff that we do off the field plays into what we do on the field and that’s where our chemistry comes from.”

While Smith-Nijgba looks to build off of his record-breaking season, Ohio State head coach Ryan Day pointed to the stride he has made in terms of his leadership rather than what he brings on the field.