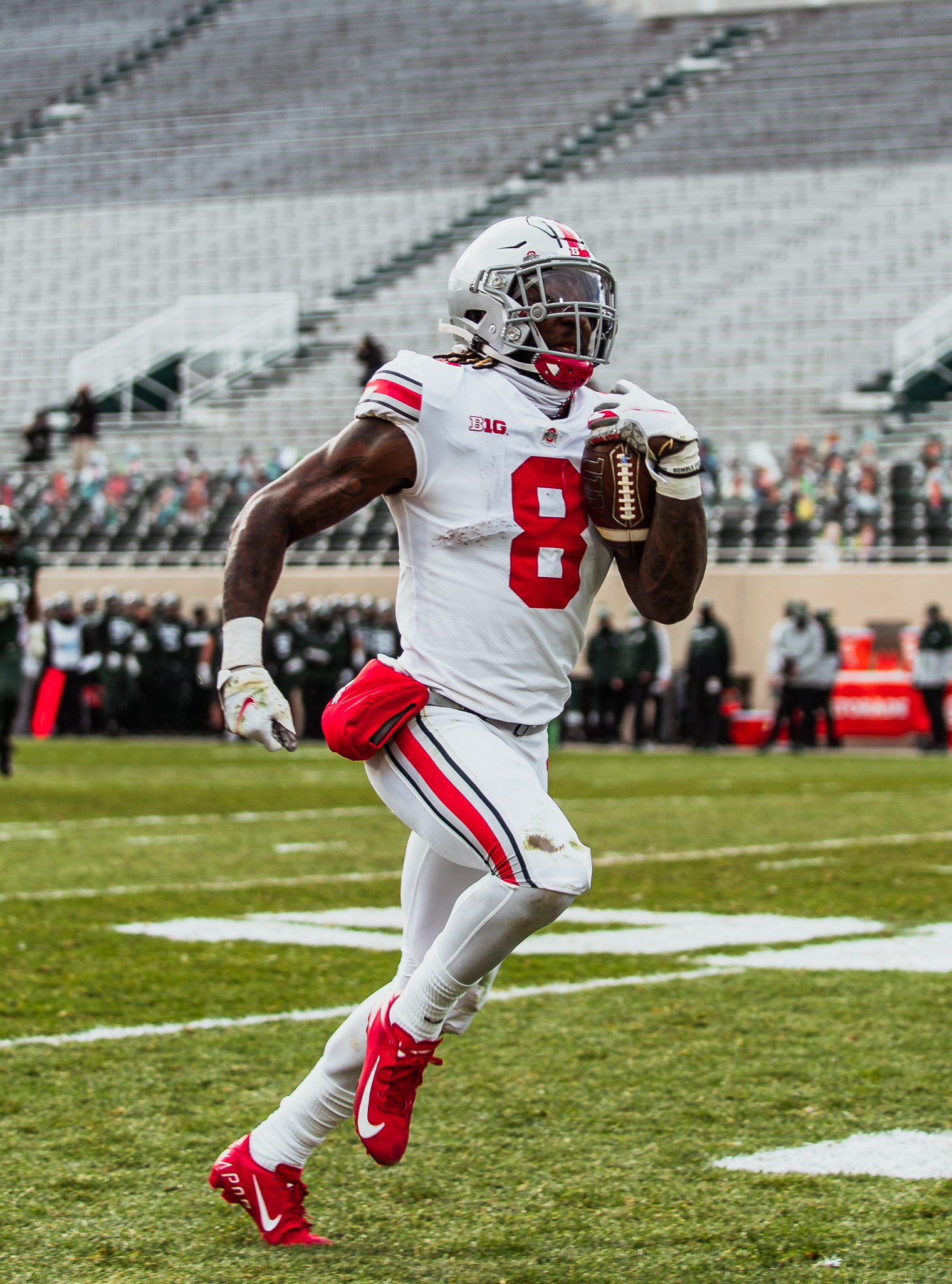 Ohio State had a depleted roster and was minus head coach Ryan Day, but the No. 4 Buckeyes still had Justin Fields.

He accounted for four touchdowns (two run, two pass) and accounted for 303 total yards when Ohio State downed Michigan State 52-12 at Spartan Stadium in East Lansing, Mich., on Saturday to move to 5-0 overall and the Big Ten.

The Buckeyes overwhelmed the Spartans (2-4) for a 28-0 halftime lead when Fields had a TD pass of 28 yards to Garrett Wilson and runs of 2 and 1 yards. Defensive end Haskell Garrett added a pick six late in the second quarter.

Ohio State was without five starters, three on the offensive line, because of COVID-19, illness or injury

Center Josh Myers, left tackle Thayer Munford, right tackle Nicholas Petit-Frere and freshman OL backup Paris Johnson, along with linebacker Tuf Borland and safety Josh Proctor were among 23 players, 17 on scholarship, that did not make the trip (the school did not specify why players were unavailable).

Ohio State cancelled its game at Illinois on Nov. 28 because of a COVID-19 outbreak that included Day, who was at home in quarantine for the game.

Associate head coach/defensive line coach was the acting head coach, becoming the first African American to hold that position for the program.

While there was the potential for an upset, Fields quickly removed any doubt.

Ohio State’s first drive of 83 yards was an adventure that resulted in a 2-yard scramble for a touchdown by Fields for a 7-0 lead at 8:46. Half of the 12 plays began with poor snaps by sophomore Harry Miller, the left guard  filling in for Myers.

Nonetheless, the Buckeyes went 83 yards in 4:37, aided by a roughing-the-passer penalty and a 21-yard run by Master Teague to the 1. After Teague lost a yard on two carries, Fields was able to get out of the pocket and run toward the right pylon for the score.

Fields led the Buckeyes 72 yards in three plays covering just 41 seconds for a 14-0 lead at the 2:01 mark. He ran 44 yards to the Spartans 28 on the first play and after an incompletion, rolled right and tossed a TD pass to Wilson.

The Buckeyes were methodical in marching 75 yards in 10 plays for a 4:57 scoring drive, capped by Fields’ 1-yard run for a 21-0 lead at 10:25 of the second quarter. The big play was one that could have been bigger.

Wilson had a 64-yard catch-and-run for an apparent TD but Teague was called for a downfield hold, limiting the gain to 24 yards, and putting the ball at the Michigan State 49. Miller kept the series rolling when he recovered Olave’s fumble after an 8-yard catch to the MSU 44.

Garrett, who was shot in the face in the summer while acting as a peacekeeper, had a pick six to go up 28-0 with 5:15 left in the half.

The Spartans were pinned at the 1 after 35-yard punt by Drue Chrisman and on third down from the 2, Rocky Lombardi tried to pass from the end zone but Garrett tipped the ball with his extended left arm and he grabbed the ball for his first career interception.

OSU’s defense came through again in the final minute of the first half. On fourth-and-2 from the Ohio State 39, Payton Thorne ran for 3 yards, but Baron Browning forced a fumble and Javontae Jean-Baptiste fell on it at the OSU 47.

The Buckeyes’ offense had gone three full series end in punts – plus a possession to end the first half – before Sermon’s 64-yard TD run at 6:14 of the third quarter upped the score to 35-0. OSU went 87 yards in 2:06 with Sermon on the fifth play taking the handoff heading left before cutting back and finding a gaping hole through the line for the sprint to paydirt.

Michigan State made it look easy in responding to make it 35-7, needing two plays and 44 seconds to go 75 yards. Thorne, the backup quarterback,  hit Jayden Reed for 55 yards. Thorne kept the ball on the next play and ran 20 yards for the score.

The Spartans gifted the Buckeyes a scoring opportunity, but OSU had to settle for a 27-yard field goal by Blake Haubeil with 1:08 left in the third quarter.

MSU was guilty of a late hit on Sermon and Spartans coach Mel Tucker was flagged for another 15 yards to move the ball to the Ohio State 49. Fields had 6-yard pass to Julian Fleming followed by 11 and 25 yard runs to the 9 before Sermon lost a yard on a rush and Fields had two incompletions.

Two possessions later, Fields made quick work for a 45-10 score, needing one play to go 41 yards for a scoring strike to Olave at the 8:16 mark. Olave made 10 catches for 139 yards.

A bad snap for a  21-yard loss with Jack Miller at quarterback led to a safety for MSU with  1:02 left.