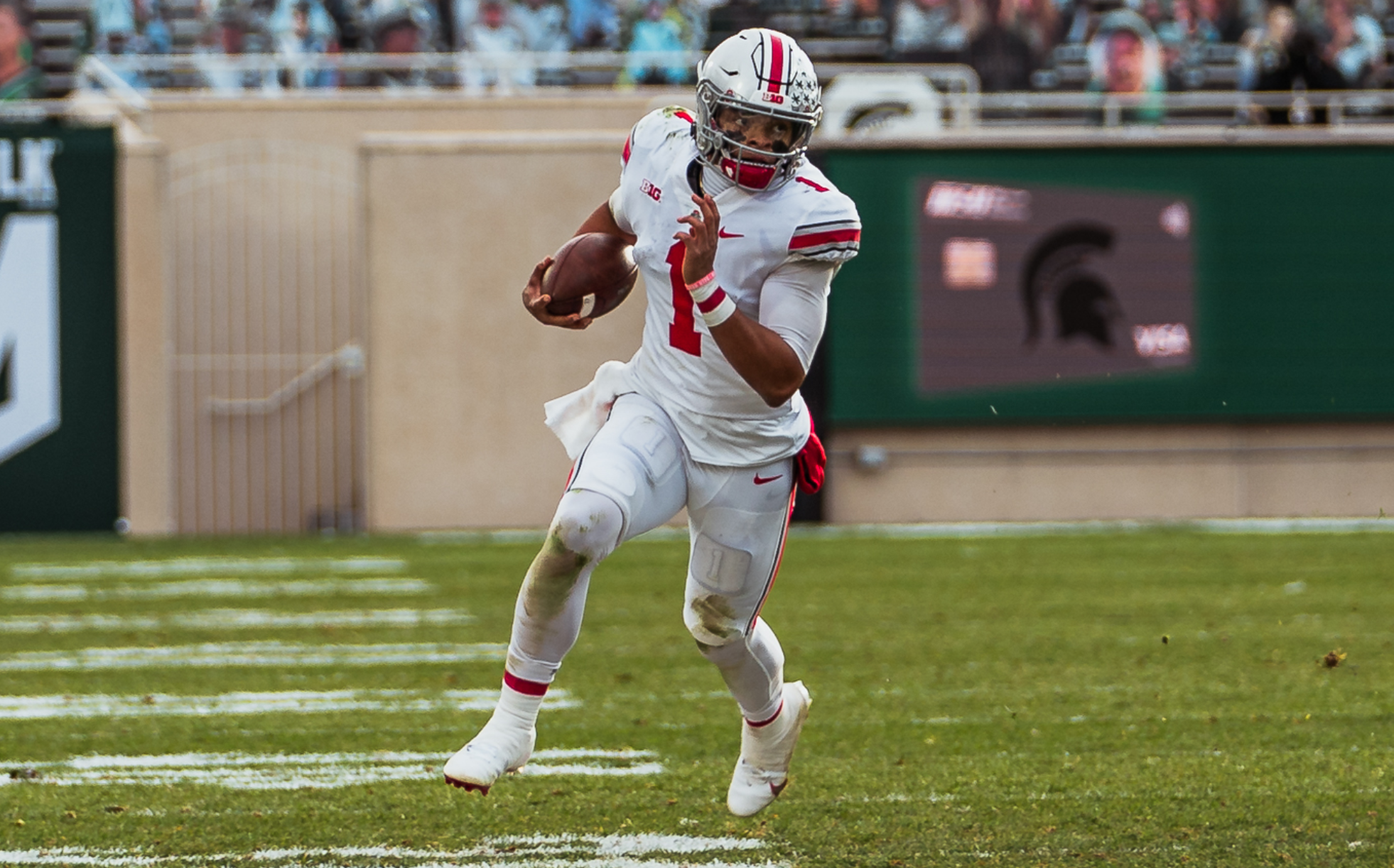 Ohio State took care of business, defeating Michigan State 52-12 in East Lansing despite the absence of 23 players, many of which are out due to positive COVID-19 tests.

The Buckeyes jumped out to a 35-0 lead and held on the rest of the way, with multiple players standing out in the impressive road performance.

Sometimes the obvious choice is the right one, and that was the case for quarterback Justin Fields during this lopsided win, even if his passing numbers weren’t quite up to the level they had been in earlier games this season.

Fields completed 17 of his 24 passes and only threw for 199 yards and two touchdowns, but made up for it in the ground game, rushing for a career-high 104 yards and two scores on 13 carries.

Those numbers are impressive enough to merit a Buckeye leaf, but to do it with three starting offensive linemen out in front of you made it even more special.

Fields did not lead the team in rushing, though, with senior running back Trey Sermon’s 112 yards on 10 carries leading the way there.

I also want to give an honorary Buckeye leaf to Larry Johnson, who became the first Black head coach in Ohio State football history, and did it while leaving East Lansing with a 1-0 record.

Ohio State junior wide receiver Chris Olave deserves a Buckeye leaf for his performance in the Buckeyes’ 52-12 victory at Michigan State. Olave hauled in 10 receptions for 139 yards and one touchdown.

The standout Buckeye receiver helped his team pick up six first downs, including one on third down. Olave, a solid blocker, also made several blocks to spring long runs for Justin Fields, Trey Sermon and Master Teague. He also downed a punt at the Spartan 1-yard line as a gunner.

Ohio State fifth-year punter Drue Chrisman also deserves a Buckeye leaf for a phenomenal performance in East Lansing. After dropping five punts inside the 6 in 2018, Chrisman made his return to Spartan Stadium and did not disappoint.

Chrisman punted five times for a 53.4-yard average, downing the Spartans inside the 20 thrice, including two inside the 2. His long punt went 74 yards and downed Michigan State at the 2.

Based on his play this season, it’s easy to forget that senior defensive tackle Haskell Garrett’s season – and, quite possibly, his career – was in jeopardy after he suffered a gunshot wound to the face while allegedly breaking up an off-campus altercation this summer.

His resolve paid off when he recorded Ohio State’s first sack of the season in the opener against Nebraska and against against Michigan State when he tipped a pass in the end zone and came down with it for the pick-six to put the Buckeyes up 28-0 in the second quarter.

It was a tremendous moment in a game that felt otherwise routine and another reason why I think Garrett might find himself being selected in the late-first or early-second round of next year’s NFL draft. Cameron Heyward, anyone?

Ohio State’s showing against Michigan State might have been the best of the season so far for the Silver Bullets, though it’s hard to know how much of that can be attributed to improvements from the Buckeye defense and how much of it falls on the putrid Michigan State offense, but it’s worth noting nonetheless.

Even without several starters, including safety Josh Proctor – who has stood out all season in the secondary – and middle linebacker Tuf Borland, the Buckeyes looked competent, cohesive and confident against the Spartan offense save for one or two badly blown plays.

The best player of the bunch of the defense was senior linebacker Pete Werner. The Indiana native has been impressive in the outside linebacker spot all season, but he rose to the occasion in filling in for some of those missing teammates on Saturday. He had eight tackles (three solo) on the day and helped to force a Payton Thorne fumble at the end of the first half, though it was attributed to his batterymate Baron Browning.

Outside of the stat sheet, Werner just always seemed to be in the right place at the right time and it was rare to see a tackle made without him at least within the frame, if not fully involved with the tackle. Ohio State’s linebacker play has been a rollercoaster at times in recent seasons, but Werner’s play against MSU was reminiscent of the kind of linebacker play that earned Ohio State a real claim for the “Linebacker U” title in the late 1990s and early 2000s.