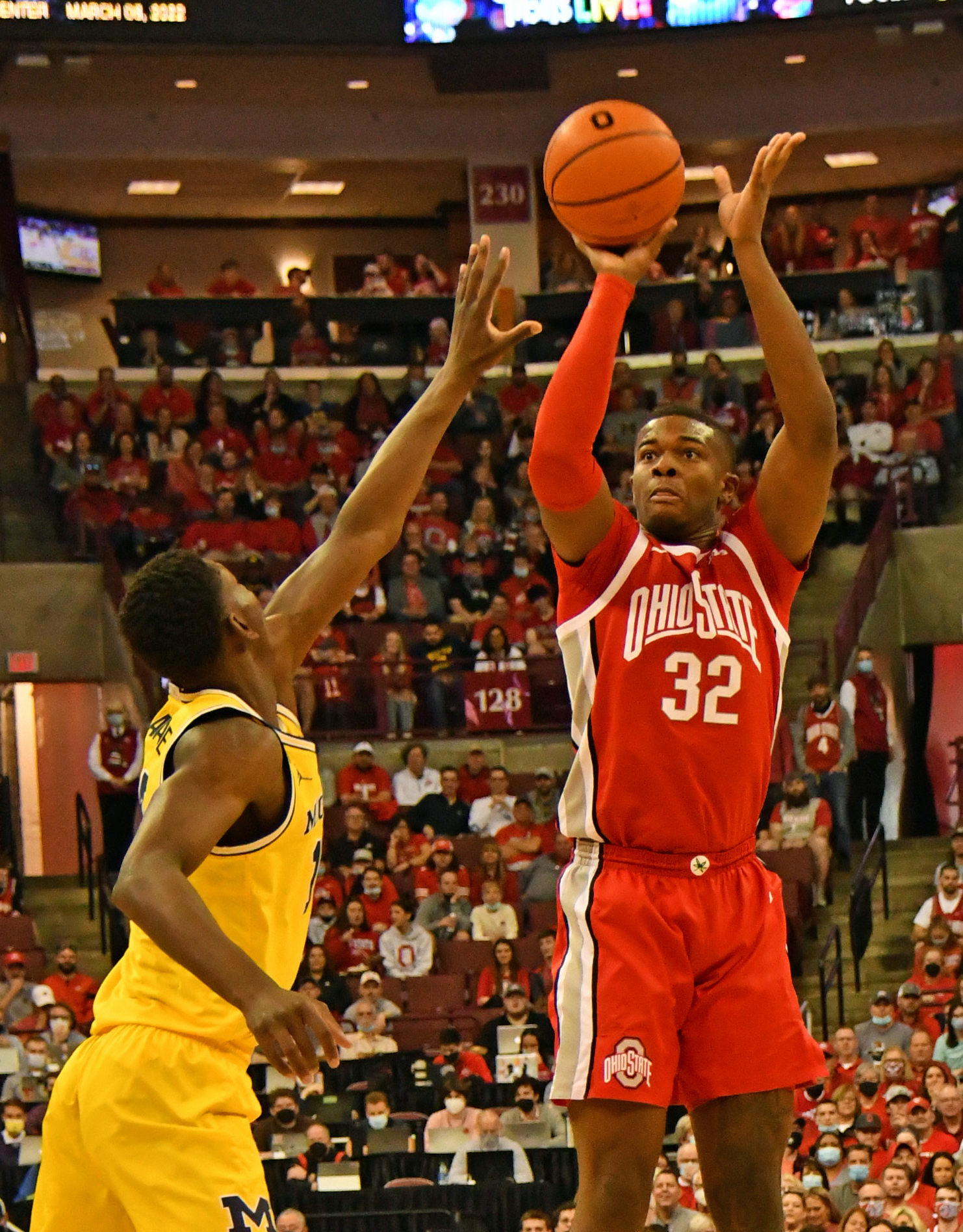 Ohio State’s offense clicking into place in a 75-69 loss to Michigan on March 6 didn’t sound like a traditional fastener, just like its undoing to open the second frame came with no button pop. There was no overt announcement that Chris Holtmann’s team was again playing with the kind of flow offensively that had guided it through the early stages of the season after weeks of struggling to rekindle that energy down the stretch of the regular season, or that it was regressing to the mean out of the break.

Instead, the offense once considered one of the Big Ten’s most balanced and lethal announced its return in the first half with a crowd roar – the kind that Michigan State head coach Tom Izzo said was seriously lacking after the Buckeyes beat his Spartans 80-69 on March 3.

“I would say one thing about this place: I was disappointed in their fans,” Izzo said after that game. “The way they were playing, this place should be rocking and packed.”

That crowd, packed in for Ohio State’s combination senior day/rivalry bout/season finale, could sense the shift in the Buckeye offensive attack from the tip-off. It was loud when senior guard Justin Ahrens flew around an off-ball screen, collected a Malaki Branham pass and knocked in the first three points of the game for the Buckeyes. It did the same when Jamari Wheeler knocked down a 3-pointer of his own on a similarly pretty play a minute later.

As Ohio State and Michigan battled in a frantic first half that saw 13 lead changes and haymaker after haymaker on opposite ends of the court, the fullest house of the season matched the game’s energy and earned effusive praise from Holtmann after the game.

When Wheeler knocked down another triple, which, same as the first, rolled around the rim and drew a foul on the other end, the scarlet-clad crowd ignited. When Joey Brunk threw down an emphatic jam on the following possession – two points in a 9-2 run to help the Buckeyes to a 37-30 halftime lead – it erupted.

However, out of the break, Ohio State’s offense looked like it needed a restart.

The Buckeyes converted on only three of their first nine second-half tries and turned the ball over on three consecutive possessions to allow the Wolverines to wrest the lead back after just over five minutes of play with a 12-4 run, up 42-41. Ohio State answered with a Branham layup to reclaim it briefly, but Caleb Jones converted a second-straight 3-pointer to extend the Michigan lead to two points.

Just as the crowd pop in the first half had signaled a shift in energy, the murmurs and silence of the second half acknowledged a must-win game slipping out of Ohio State’s grasp. When Michigan expanded its lead to six points, 49-43, into the under-12-minute media timeout, the murmurs turned to groans.

Gone was that jolt of the opening 20 minutes, and in its place stood the same discombobulated Buckeye offense and gassed defense that had dropped Ohio State out of Big Ten title contention and into a furious race just to maintain a double-bye in the Big Ten tournament. And eventually, as the clock ticked down, hopes of winning that race faded too. Michigan’s lead grew to seven points, then nine, then 12, forcing a Holtmann timeout with 10:13 to play when Eli Brooks converted a trio of free throws to put the Wolverines on top 56-44.

Michigan maintained roughly that lead across the next four minutes, but Ohio State’s offense – which had looked terminal for much of the half – roared back to life, and with it came that same noise and energy of the first half. The Buckeyes rattled off a 7-0 run to cut the deficit to four, 60-56, with 5:02 remaining. Two quick Michigan buckets halted the sudden momentum, but a pair of Ahrens triples (his third and fourth of the game) rejuvenated it all over again, bringing the hometown team back within two scores again with 1:46 to play, 66-62.

But even Ahrens’ finest performance since Feb. 6 against Maryland (he scored 14 points then and 12 here) proved insufficient. Kobe Bufkin answered the 3-pointers with one of his own to put Michigan back ahead by seven points, and a Moussa Diabate dunk a possession later (after one made free throw from Liddell) all but set off the final buzzer. Branham emerged from a chaotic possession with a deep ball of his own after the dunk, but with only 22 seconds remaining, Ohio State was forced into fouling.

Michigan’s aim at the line was true in both trips, washing away Ohio State’s last-ditch effort and sealing the Buckeyes’ fate as participants in the second round of the Big Ten Tournament come March 10.

DeVante Jones led all scorers with 21 points, next to 17 for the Wolverines from Terrance Williams II. Branham’s 18 and Liddell’s 16 led the Buckeyes, with Ahrens as the only other double-digit scorer. Liddell also pitched in 13 rebounds and three blocks in his last home game in the scarlet and gray.