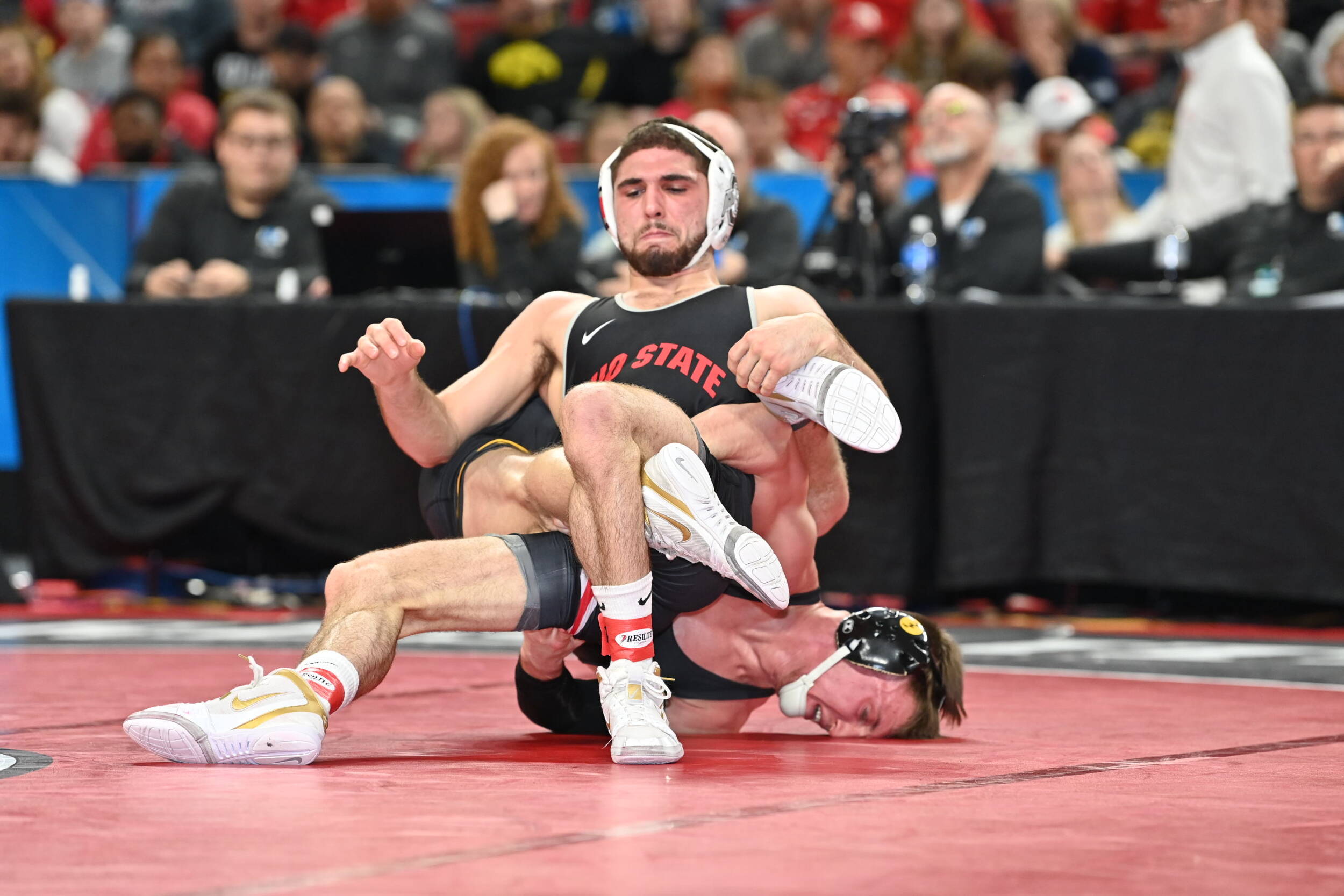 Sammy Sasso will defend his individual Big Ten title at 149 pounds against Wisconsin’s Austin Gomez this afternoon after winning two matches on Saturday.

Sasso is the No. 1 seed in his weight class. He took a first-round “bye” before defeating Indiana’s Graham Rooks in a 6-3 decision and Iowa’s Max Murin in a 3-1 decision. Sasso and Murin were tied at one-all with 20 seconds remaining when the Ohio State wrestler secured a late-round takedown and awarded himself a two-point victory.

Gomez earned the No. 2 seed at the Big Ten Championships. He also took a first-round “bye” and cruised to the 149-pound finals, beating Penn State’s Beau Bartlett in a 12-4 major decision and pinning Nebraska’s No. 3-seeded Ridge Lovett in 20 seconds.

Though Sasso and Gomez are both redshirt juniors, they have never faced each other on the mat. In Ohio State and Wisconsin’s most recent dual, Sasso defeated Drew Scharenbrock, 12-5. The Buckeyes and Badgers did not meet in the Big Ten regular season.

KHARCHLA AND ROMERO REACH THE SEMIFINALS

Carson Kharchla and Kaleb Romero reached the semifinals at 165 and 184 pounds. Both wrestlers lost their matches, which sends them to the consolation brackets for a run at third place.

Kharchla took a first-round “bye” as the No. 1 seed at 165. In the quarterfinals, he made quick work of Nebraska’s Clayton Wilson and claimed a 7-2 decision to earn a matchup with Michigan’s Cameron Amine in the semifinals. Kharchla and Amine were tied at one-all when the final-regulation buzzer sounded. The wrestlers went to sudden victory, where Amine secured a two-point takedown that sent him to the championship round.

With the loss, Kharchla heads to the consolation rounds to face Northwestern’s David Ferrante. He will need to win two matches to take their place, with his lowest possible finish being eighth.

Romero had a busier Saturday than Sasso and Kharchla, entering the Big Ten Championships as the No. 3 seed at 184 pounds. He defeated Northwestern’s Jack Jessen and Wisconsin’s Christophe Weiler in major decisions to reach the semifinals, where he faced Michigan’s Myles Amine.

When Ohio State faced Michigan in the regular season, Romero lost to Amine, 3-1, in a hard-fought bout at the Covelli Center. The Buckeye wrestler suffered a similar fate in the Big Ten Championship semifinals. Amine scored the match’s only takedown in the second period and tacked on a riding time bonus for a 4-2 decision.

Romero will look to bounce back in the consolation bracket against Maryland’s Kyle Cochran, who lost to No. 1 seed Aaron Brooks of Penn State in the quarterfinals before beating Rutger’s John Pozanski of Rutgers and Iowa’s Abe Assad in the wrestlebacks.