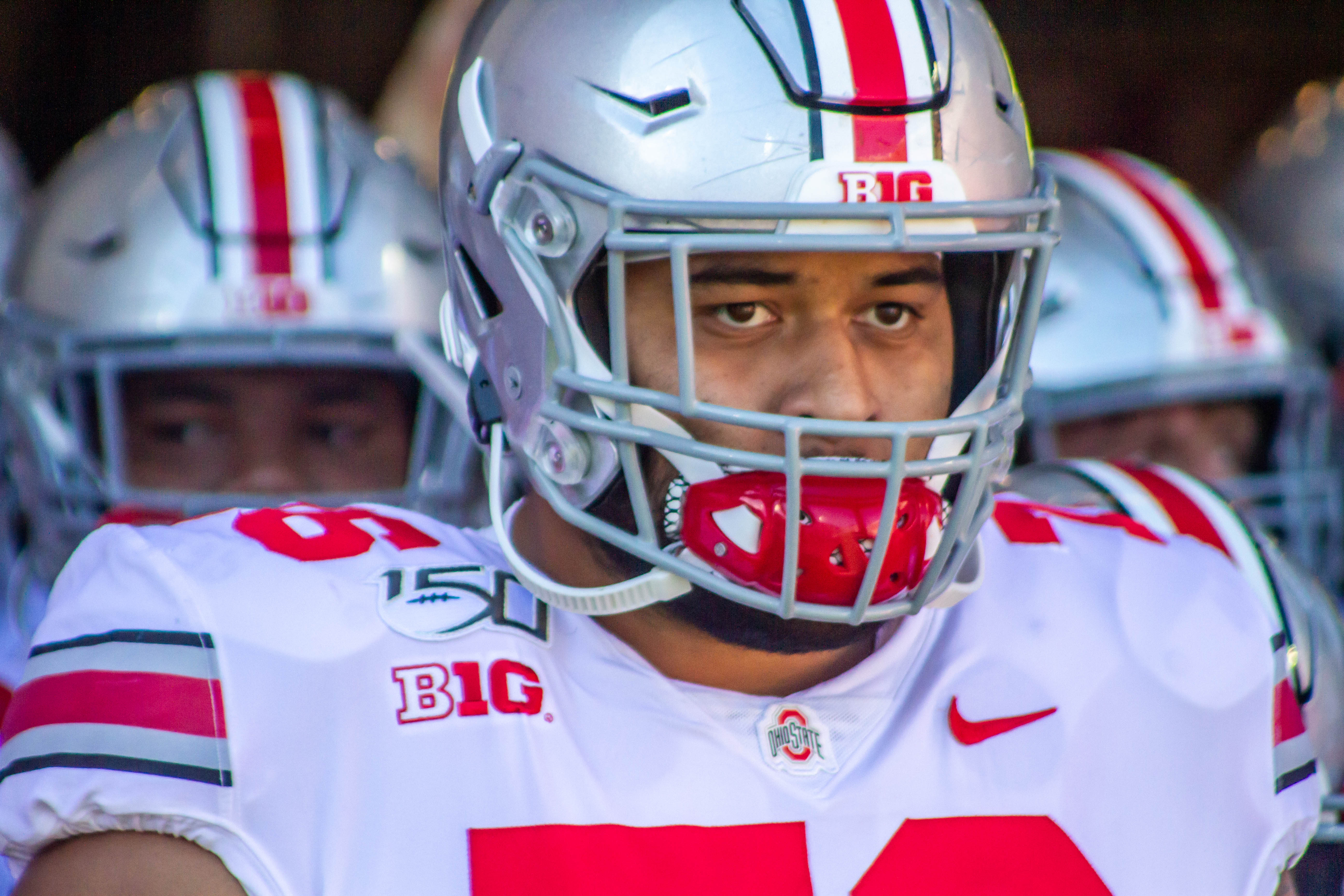 The cancellation of Ohio State’s pro day due to concerns around the spread of COVID-19 had a significant impact on several Buckeyes, with an increased blow to the few draft eligible Buckeyes that didn’t land an NFL Combine invite. No one, however, was hurt more by that lost opportunity than fifth-year senior tackle Branden Bowen. A multi-year starter in Columbus, Bowen worked his way back from a brutal leg injury in the middle of 2017 that forced him to miss the remainder of the 2017 season and the entirety of the 2018 season.

In his final year in 2019, Bowen proved that he could still compete at an elite level despite the injury, reestablishing himself as the starting right tackle after beating out highly touted underclassman Nicholas Petit-Frere, and played well throughout the season, holding his own as a consistently solid and competent member of one of the best lines in the nation.

However, the 6-7 Utah native lacks the kind of flash that some of his fellow Buckeye linemen (like Wyatt Davis or Thayer Munford) bring to the table. As right tackle, he was usually just asked to stand his ground and keep the pocket clean for Justin Fields, which he excelled at, but which also kept him from racking up highlight plays or really shining through on film, forcing NFL scouts to give him a look. When pairing that with the two years that he spent away from football, Bowen entered this draft process without enough attention or hype to merit that combine offer.

Without that, and without a pro day, Bowen lost a key chance to show his athleticism, something that he never really had the chance to do in Ohio State’s offense. He did get to play at the Shrine Bowl, but there’s usually not a ton to be gleaned from events like that for offensive linemen. That leaves Bowen in a strange place entering the draft. He has film that proves his health, and that shows him as more than capable at right tackle, but he doesn’t have testing numbers to back it up.

Understandably, that’s going to leave quite a few questions unanswered, and when it comes down to the final rounds of the draft, the inability to answer those questions will likely cause the Buckeye to slip out of the drafted and into a UDFA spot, where he’ll be able to pick his landing spot, but won’t have the security that comes with a team spending draft capital on him. There’s still a chance for Bowen to find his way onto a team’s board late and sneak into the later rounds, but it would require a scout or coach falling in love with his game.

If that’s going to happen, it’ll be because of his pass protection. Bowen is strong and has a good understanding of leverage in pass protection. He rarely stands up too straight, so he’s able to keep his balance well and land solid first contact against the pass rusher.

Here, he get the contact quickly, using his long arms and strength to keep the rusher neutralized before cutting down the distance between them to prevent any sort of breakout. His first step isn’t particularly explosive, which we’ll touch on a little later, but it’s good enough that he can keep the defender in front of him, and use his physical advantages to take him out of the play.

He isn’t very explosive with his hands, so he rarely knocks players back, but his technique is good, so he’s isn’t going to be knocked back either. He’s good at forcing stalemates, and that’s really all he needs to be able to do.

Now, about that first step.

This isn’t good. He struggled with speed rushes like this at times in 2019, and it seems to be connected with his first step, which can be tied right into that leg injury. He seems hesitant to explode enough onto that first step so that he can keep up with rushes like this, and it hurts him against elite edge rushers. He needs to be able to get to these quicker, because he has the strength to handle them, but he can’t do it if he’s a step behind.

This doesn’t seem to be a case of a lack of athleticism either. He shows on this reach block that he does have that explosive ability with his legs, which helps him with mobility in the run game even though he isn’t asked to move laterally a whole lot. He has this athleticism in his game, he just doesn’t seem to use it all the time in pass protection. If he’s drafted or not could come down to if a coach sees that, and thinks he can turn this explosive first step into the first step that Bowen uses on passing downs.

With that said, even without a great first step in pass pro, Bowen was usually able to cover his weaknesses in college because of his intelligence, and he isn’t going to have any trouble transitioning that part of his game to the next level. He’s smart, he understands pass rushing, and he’s able to adapt on the fly at the line in the way that you like to see from a tackle.

Here, he takes note of the shifting end paired with the linebacker showing blitz, and opens his hips on first step to that linebacker so that he can take on an edge blitz. The blitz doesn’t come, so he quickly adjusts instead of just taking the play off, and gets back inside to help his guard with that end.

That’s pretty much the basis for Bowen as a prospect. He’s consistent, smart, and has the physical traits to compete for a starting job in the NFL. Questions about both his athletic ability and health are fair, and may cause him to drop out of the draft, but he has the technical base and the tools to make him a pretty high floor late round target for a team that wants a surefire backup tackle, with the potential to develop into a decent starter if his health can hold up. It’s not the easiest sell, especially without testing numbers, but there’s a case to be made, and that could be enough for a team to fall in love.