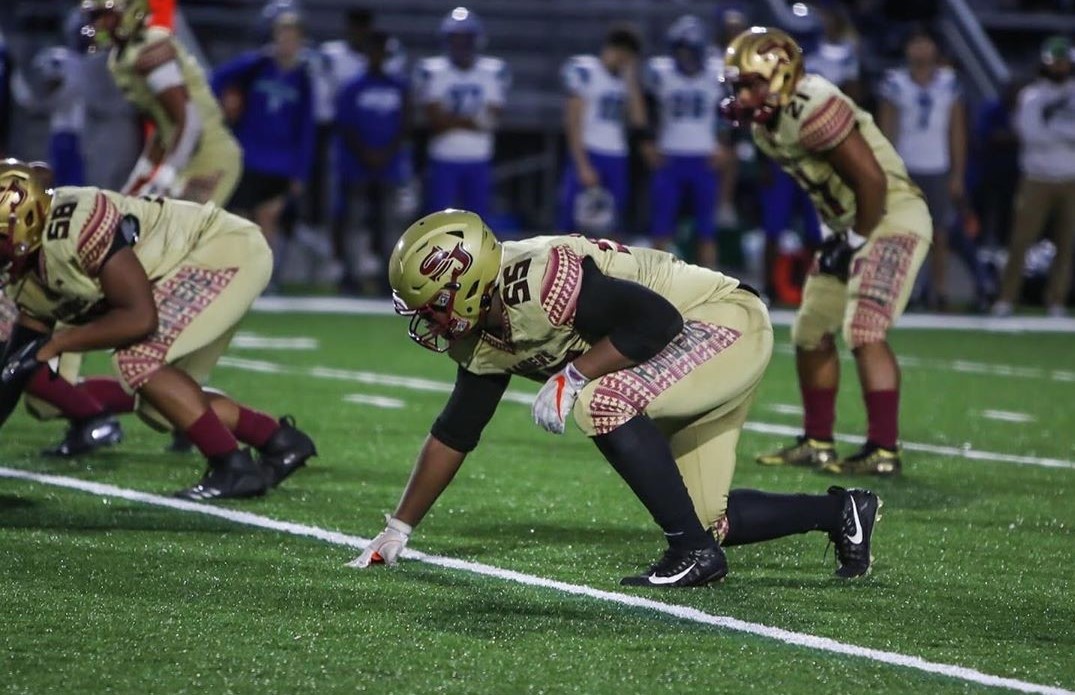 There isn’t a position group in Ohio State’s program that has produced players with more consistency in the last decade than the defensive line group, manned by long-time defensive line coach Larry Johnson. Johnson has spent his career recruiting, coaching up and sending off defensive linemen to the NFL and he’s done so for decades with essentially the same formula. Johnson has a very distinct style of recruit and a very distinct archetype that he likes for his room and seemingly every cycle he has no issues with identifying and reeling those prospects in.

The Johnson-style defensive line prospect is as defined an archetype as any in college football. he recruits quiet, hardworking athletes that have room to grow into their bodies and a strong fundamental base that can be built off of. That varies a bit with the way that Johnson recruits edge defenders because of the need for truly elite athletic ability, but when it comes to interior linemen under Johnson, he’s been putting out basically the exact same thing since 1996 when he was hired at Penn State.

The newest addition to the defensive line room at Ohio State is four-star Manassas, VA., four-star defensive tackle Tyleik Williams, who committed to the Buckeyes on Aug. 27 over the in-state Virginia Tech Hokies, long considered to be the favorite in his recruitment. Williams is very much a strong fit into the Johnson tackle archetype, coming to Ohio State without much fanfare but plenty of production, a strong athletic base and a foundation that can be built on by both Johnson and Ohio State director of strength and condition Mickey Marotti.

What Williams brings that’s a bit different from the norm for Johnson is a frame that’s already nearly filled out. Williams checks in right now at 6-3, 330 pounds, bigger than the traditional Johnson defensive tackle, which usually weighs in at just a tick under 300 both out of high school and then at the college level. Johnson’s last four starters (Jashon Cornell, DaVon Hamilton, Dre’Mont Jones and Robert Landers) average out to 291.5 pounds, with the highest, Hamilton, at 6-4, 310 pounds. Williams compares closest to Hamilton of anyone from the Johnson era at Ohio State, but in all honestly, this is a body type that Johnson really hasn’t worked with a ton in the past. Purely on physical profile, Williams looks a lot more like an SEC-style nose tackle designed to clock up the middle of the line.

That isn’t really Johnson’s style, but the reason that this commitment makes sense for the Buckeyes is that, despite his physical profile, it isn’t Williams’ style either. The Virginia product is much more of a 3-tech defensive lineman, the kind that Johnson likes to work with.

A lot of that comes from athletic ability. His biggest strength as a player right now is his first step, which is a whole lot quicker than you’d expect from a 330-pound defensive tackle. He’s what you’d call a “fast-twitch” athlete, which basically just means that he’s built to be explosive. That could be used to describe basically every recruit that Ohio State takes, because to play football at Ohio State you have to be explosive and fast-twitch to survive. Williams fits that mold and it defines a significant piece of his game. He’s thrived in high school because on a decent percentage of snaps, he’s able to just blow right past offensive linemen and into the backfield because of how quick he is.

The issue is that you can’t really do that in college, because everyone else on the field in college was also athletically dominant in high school. That’s not the end of the world for Williams or anything, it just means that he has a very good athletic base to build on for Ohio State’s staff.

The good news is that Williams has a head start on the next stage of development, because he plays basically everywhere on the defensive line for his high school. Through time spent as a pass rusher at end, he’s picked up some basic hand-fighting techniques and won’t be coming to Ohio State completely devoid of the more technical side of the game, as a lot of young defensive linemen do. He’s not Joey Bosa by any means at this point, but like with the athleticism, he has a strong base that Johnson can mold and build off of, without having to erase bad habits. Williams’ has good hands and can develop into a strong technician without a ton (two or three years) of work.

The one thing that will require a decent amount of work to reverse at the next level is where Williams goes after that quick first step. He’s been able to get away with it in high school, but as soon as he shoots out of the stance, he’s almost immediately standing straight up. It doesn’t happen on every play but it does happen enough to consider it a habit that needs to be fixed. A lot of his success at the next level will be determined by how good he is at getting underneath the pads of interior offensive linemen and as it stands right now, he’s aiming for helmets. It’s not an unfixable problem (Johnson has dealt with it plenty), but it will probably keep Williams off the field for at least a year.

From there, he looks a lot like a future starter at Ohio State. He likely isn’t a first-round type because he doesn’t enter college with a truly elite trait, but Johnson has built a career off of guys like that and seems to have another strong fit for the role in Williams, especially when pairing him with a smaller tackle like Michael Hall.