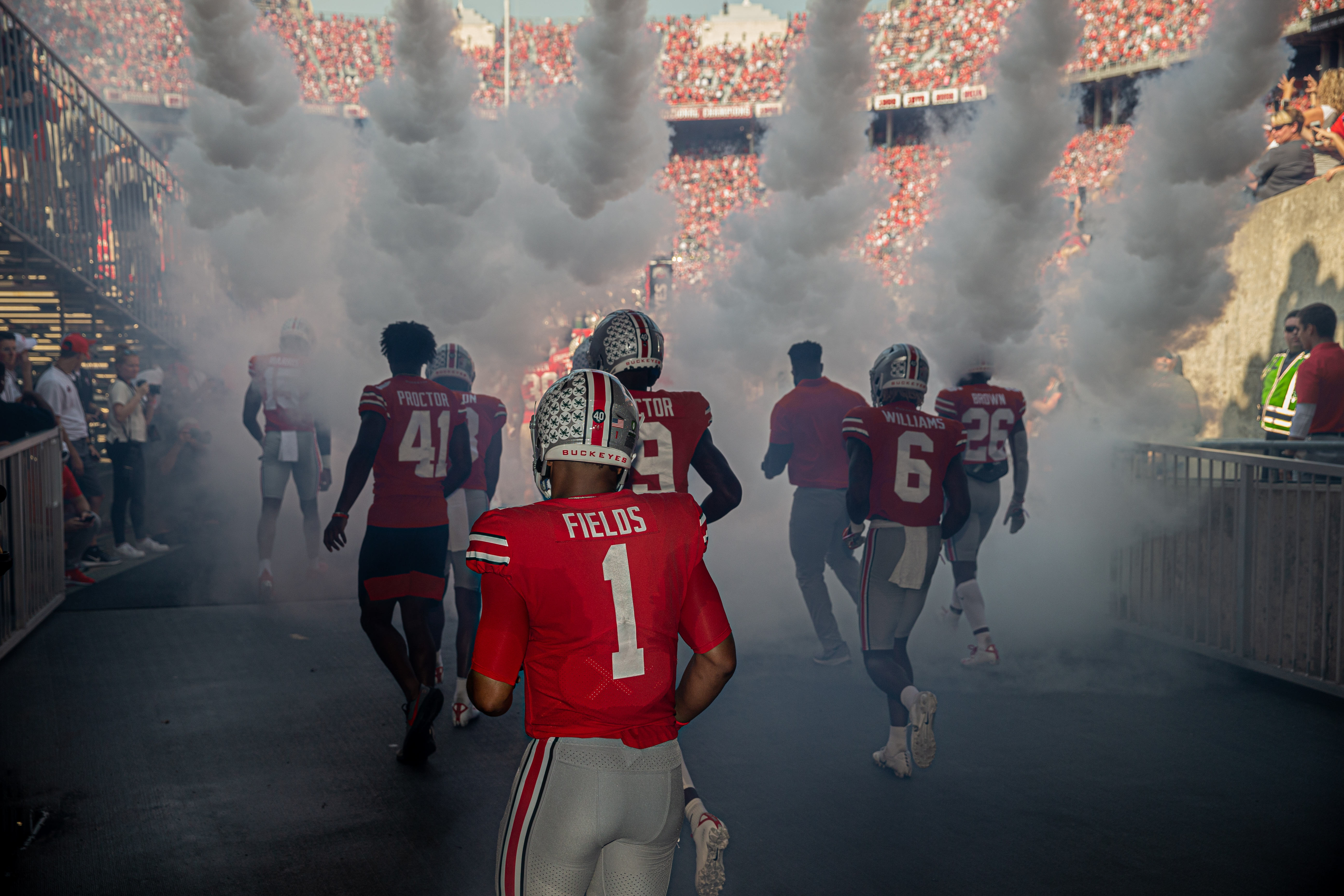 On Aug. 9 and into Aug. 10, a player-led movement shot into the limelight. As rumors swirled about the Big Ten and Pac-12 planning to postpone the upcoming fall football season, which both would do on Aug. 11, college football players around the country – including Ohio State quarterback Justin Fields and Clemson’s Trevor Lawrence – shared a hashtag, stating simply “#WeWantToPlay.”

In the letter, which featured the logos of each of the five power conferences, players released a concise list of demands. In that list, the players stated that they want to play a season, with universal health and safety procedures and assured eligibility for all players whether they play or opt out. At the bottom, it calls for something that may change the landscape of college football forever.

“Use our voices to establish open communication and trust between players and officials; ultimately create a college football players association,” the graphic reads.

Hobbs was at the forefront of the Pac-12’s “#WeAreUnited” letter as well and told KREM in Spokane, Wash., that the unification of the two movements came about in just the span of a couple of hours, over a group chat and a Zoom call.

“It really started out as a group chat,” Hobbs said. “We (the players) just talked about some conversations that people had and really what #WeWantToPlay and #WeAreUnited had in common. That’s kind of what we talked about and said, ‘Hey, we can’t let the media and we can’t let people divide us when we’re really working for the same goal.’ We all want to play, but we’re just coming at it from a different side of things.”

The rapid organization and the call for something at least resembling a college football players union sent shockwaves through the sport. Clemson head coach Dabo Swinney told reporters that he would be supportive of a players association, but not a players union.

“I think it would be great to have a players association. That’s different from a union, I’ll say that,” Swinney said.

While college football players have almost unilaterally rallied around the movement, the reaction elsewhere has been one similar to Swinney’s. Bleacher Report’s Matt Hayes posted that an anonymous athletic director said that unionization efforts are a far bigger deal than they appear from the outside.

“You and your colleagues are chasing the wrong story,” the AD told Hayes, as reported in an Aug. 8 tweet. “The virus alone is enough to stop the season. But presidents are terrified of players organizing. It’s the paradigm shift to change amateur sports.”

A push on this scale has not been seen before, but union talk is not new to college football. In 2014, Northwestern quarterback Kain Colter attempted to unionize the Wildcats, though his request was eventually denied by the National Labor Relations Board, citing issues with Northwestern’s status as the only private school in the Big Ten, and the fact that the overwhelming majority of Division I FBS schools are public, leaving them outside of the NLRB’s jurisdiction.

“In the decision, the Board held that asserting jurisdiction would not promote labor stability due to the nature and structure of NCAA Division I Football Bowl Subdivision (FBS),” the NLRB wrote. “By statute the Board does not have jurisdiction over state-run colleges and universities, which constitute 108 of the roughly 125 FBS teams.

“In addition, every school in the Big Ten, except Northwestern, is a state-run institution. As the NCAA and conference maintain substantial control over individual teams, the Board held that asserting jurisdiction over a single team would not promote stability in labor relations across the league.”

In this attempt, just over five years after Colter was denied, the differences between public and private schools will be one of several major hurdles to getting any formal recognition for a players union. Chief among them is another crucial component of that case: Employees can start unions, and currently, college athletes are not legally identified as employees.

“It was ruled in (the Colter case) that college football players, college athletes, aren’t employees of the university,” Columbus union organizer Luke Ward told BSB. “So what that means is because they’re not employees they’re not allowed to form a labor union under the National Labor Relations Act. So that is the biggest hurdle, I think, to the players ultimately forming a union. They first need to be recognized as employees. (However), I think oftentimes these court cases go with the landscape of the times and I think times have changed in the last six years.”

Another issue to clear is that of the national nature of college football and, again, the differences between public and private schools. Every state has different laws regarding unionization, organized labor and collective bargaining when it comes to public employees, which players at public schools would be considered if they are officially recognized as employees.

“This is another tricky thing under the National Labor Relations Act,” Ward explained. “Public employees are governed on a state-bystate basis. So Ohio has a collective bargaining law and there are different collective bargaining laws varying state by state, and that law governs state employees. So the difference here between a college football players union and an NFL players union or the NFL Players Association (is that) that’s a private body, so that’s governed by the National Labor Relations Board and so they’re able to have one cohesive union.”

Even if the employee threshold is crossed, employer would have to be determined, and at this point, it’s difficult to say if a court would rule that the individual schools, conferences or the NCAA at large would be considered the employer.

“The tricky part about this is if we get to a point where college football players are determined to be employees, then the question becomes who is their employer?” Ward said. “Is their employer each individual institution? Because if Ohio State is the employer for (its) players, then they’re bargaining with Ohio State, and there would have to be an Ohio State players union and you’d have to duplicate that team by team.

That isn’t to say that not being officially recognized as employees would be a death knell for the unionization efforts, just that players may have to look toward more aggressive and less official action.

“There were unions before they were codified or legally recognized,” Ward said. “In the late 1800s there were unions. Even if they weren’t legally recognized, they still were able to collectively bargain. It was a little bit more of a ‘withholding of labor’ situation then, where employees would just strike and not come into work and force management to bargain with them.

“So that’s a method. Those are more militant methods, but ultimately the players, they hold all the cards. Because if they refuse to play, everything dries up for these universities and the money that they have coming in goes away. To say that these players who generate millions if not billions of dollars for these universities and these conferences are not employees, I think is a little naive. They’re the ones (making) this money. It’s not just falling out of the sky because the coaches are such great guys. There’s a product on the field, and the players are the product.”

The other option, the one that Swinney and several other coaches have come out in support of, is a players association, which actually better matches the wording of the original graphic but doesn’t likely accomplish what players are hoping for in creating a unified force. An association would allow players to avoid the hurdles of public vs. private and of being defined as employees, but it could also take the teeth out of the movement.

“There’s been some stuff floated about players association vs. union, and the way I would say (it is that) all unions are associations, but not all associations are a union,” Ward explained. “The NFL Players Association is a union, but when I hear things like Dabo (Swinney) in an interview talking about how he’d like to see players have a voice, but that’s different from a union, I would be hesitant hearing language like that. Because when you’re talking about a players association and not a union, think of it like this: There are student government bodies, and they’re effectively an association. They can advocate for positions, but they don’t have to be listened to, they don’t have to be bargained with. The presidents can say, ‘OK, those are nice concerns about the students, but we’re going to shut the door now and we’re going to make the decisions.’

“If they’re not legally recognized employees, an association is a nice in-between step, but ultimately there’s no legally binding authority there to guarantee that they have the ability to collectively bargain over these things, over the concerns that the players all tweeted.”

Be it union, association or anything in between, the first steps are already starting for what could be a seismic shift if the players are successful. A collective bargaining unit of any sort for college football players would likely bring with it massive changes to the revenue structure of the sport and could ultimately spell the end of collegiate amateurism.

For players looking to make that change, the coming weeks and months will be as crucial as any, not just for looking to jump the legal hurdles but, more importantly, to present a truly unified workforce to the conferences, to the NCAA, and to the courts.

“The only way an organizing effort is successful is when it builds solidarity among the workforce,” Ward said. “So that’s the biggest next step. This has to be something that is widely felt, widely believed, and that has wide buy-in from the athletes at the institutional level and at a conference and NCAA level. There has to be unified buy-in from these athletes who are saying, ‘These are the things that we want to fight for to benefit all of us.’

“If you don’t have buy-in and you don’t build strong solidarity, you won’t get off the ground.”