Sammy Sasso Emerging As A Star For Buckeyes 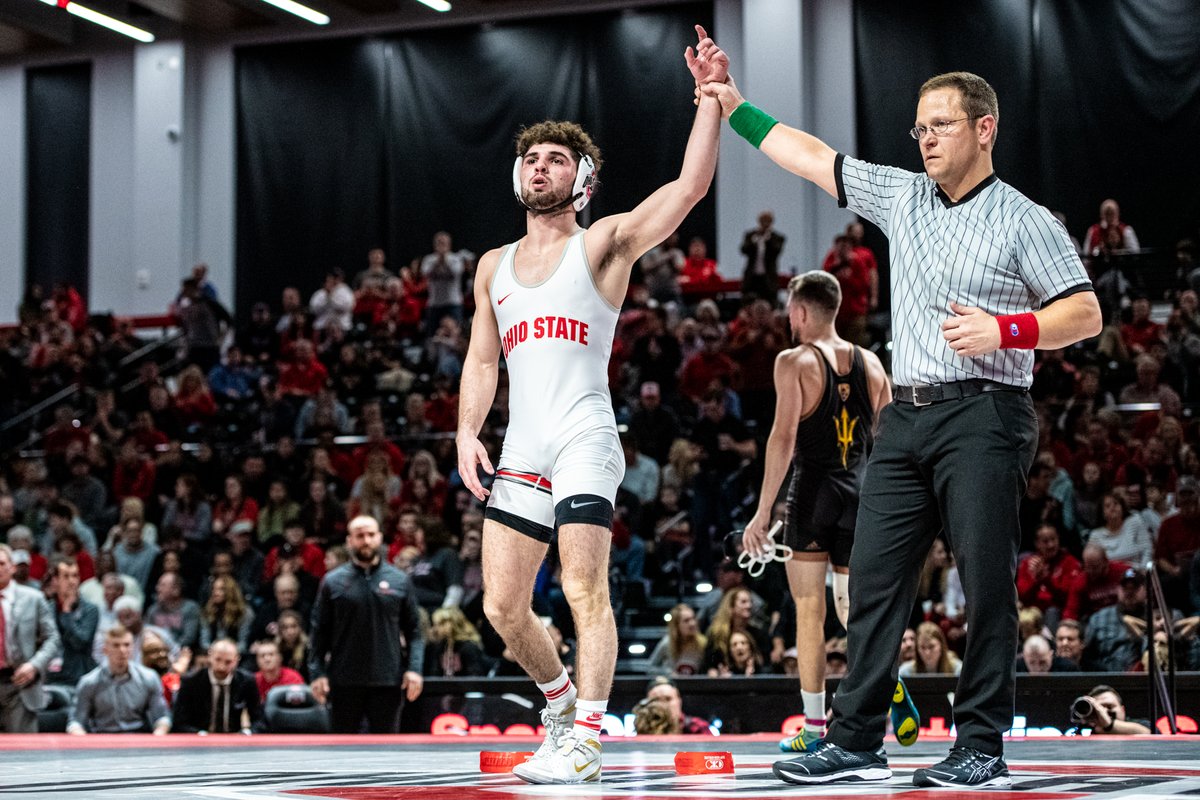 With Ohio State’s wrestling team off to a hot start to the season, Buckeye Sports Bulletin is making print features on the team available online, for fans looking to learn more about the team. This story was originally part of BSB print Vol. 39, No. 9 on Nov. 16. Features on Kaleb Romero and Anthony Echemendia are also available online.

It was a tumultuous October for an Ohio State wrestling program that wants nothing more than stability as it looks to compete as one of the nation’s best teams. On Oct. 10, former Buckeye and international star Kyle Snyder departed from the Ohio Regional Training Center for Penn State, leaving Ohio State without one of its best training partners. Then, on Nov. 1, top recruit Greg Kirkvliet entered the transfer portal just two days prior to Ohio State’s season opener at the Michigan State Open.

With a young roster, and with turmoil around the program and at the Ohio RTC, head coach Tom Ryan found much needed team leadership from a surprising spot: redshirt freshman 149-pounder Sammy Sasso. Sasso is a relatively new face around Ohio State, but he’s already begun his role not as a contributor, but as a star. As Ryan tells it, Sasso’s talent comes from a true passion for the game.

“He loves the sport,” Ryan told BSB. “He deeply loves wrestling. You can be the most wonderful, hardworking, warm, loving, caring human being, straight A student, but if you’re not – on match day – a savage competitor, you have a problem.

“Sammy is a savage. Sammy is a competitor, so that is absolutely something that we have seen from day one. He loves the sport, he’s a savage competitor, he’s a consummate learner, so he has so much knowledge of the sport.”

For Sasso, the love of wrestling and the competitive spirit come naturally. The leadership comes naturally. He was a top-five recruit in 2018, a lifelong wrestler and a perfect fit into Ohio State’s highly competitive program that enters the season ranked No. 3 according to the InterMat NCAA team rankings. He felt no pressure to adapt to the college level, because he doesn’t know anything but success. There’s no off switch, meaning that the challenge of a more demanding level didn’t mean Sasso had to change what he was doing, just that he had to learn and adapt.

“It started at a young age,” Sasso told BSB. “I love the sport. I invested my life into this and I’m here, I’m here to scrap. I come in and I’m just working my hardest to improve every day. I’m not setting goals other than the fact that I get better every single day, I improve at wrestling.”

As a reward for his hard work and effort last season and in the offseason entering 2019, Sasso was included in Ohio State’s newest tradition, the black shirt program.

“The black shirt is just an outward appearance of an inward lifestyle,” Ryan explained. “A clean lifestyle across the board. The two captains (Luke Pletcher and Kollin Moore) got the black shirts initially. We’ve seen them for four or five years, so we know who they are. In Sammy’s case, he’s a redshirt freshman. We saw him all last year, and he was an easy one for us to move from gray to black.

“When you walk into our room watching Ohio State wrestling practice, you’ll see all of our student-athletes in gray, you’ll see the coaches in red, and you’ll see a handful of guys in black. The thing about the black shirts is that it’s not to diminish the guys in gray. Being part of the team is a noble thing.”

The black shirt comes with a role of responsibility. It’s not quite being named a captain, but wearing the black around the Jennings Wrestling Facility brings with it the weight of expectations and the weight of setting an example for everyone else on the team. It’s a role that Sasso embraces, though he recognizes that he isn’t alone as a leader.

“(Being recognized) was pretty cool,” he said. “It’s a cool little tradition that we started, that we’ve got going on. I think there are other guys that are on their way there. We’ve got a good program here. Guys come in and they work hard, so I’m happy with where the team is going.

“I try to be a leader, but I don’t have to be, really. We have a lot of guys in here that work really hard, and I do what I can to help. We have a young team this year, but we scrap hard and we get after it.”

While Sasso has climbed to a spot among the best wrestlers on the team, as he proved with a dominant showing at the Michigan State Open rattling off five wins in five tries, his head coach says that it isn’t his talent that truly makes him shine – it’s his ability to learn.

“The last thing about Sammy is, as I said, he’s a learner,” Ryan said. “He corrects mistakes. If he does something wrong, he assesses it and he moves forward from it with a plan. He’s pretty unique, Sammy.”

On top of his wit and intelligence as a wrestler, Sasso has a tendency to deflect praise. He’s confident in his ability, but he’s the first to credit his teammates and coaches over himself. It shows off the mat in interviews and on it, when he can be seen cheering on his teammates as loud as anyone in the newly built Covelli Center, the home of Buckeye wrestling.

“The other thing I love about Sammy is that he loves the team,” Ryan said. “He’s a team guy, he screams and yells in the corner for the guys, and he wants them to win as much as he wants to win.”

For Sasso, the ceiling is hard to quantify. As a 19-year-old with one year of college under his belt, he’s already one of the nation’s best wrestlers. He’s the No. 8 wrestler in the nation at 149 pounds, one of just three freshmen in the top 20 and the highest ranked of the bunch. He’s a UWW Junior Freestyle Champion, an OSU ScholarAthlete and a two-time Pennsylvania AAA state champion. The talent, the intelligence, the leadership, it’s all there. As his head coach sees it, Sasso deserves mention in rarefied air with some of the Buckeye greats.

“We’ve had a lot of great freshmen here,” Ryan said. “We had (Nathan) Tomasello, Lance Palmer got it going as a freshman, Nate won (a national title), Myles (Martin), Logan Stieber won it and Kyle (Snyder) was second. I don’t think there’s any question that at this point – and we’ll see how things turn out for the next four or five years – but, as of right now, he’s as good as any freshman I’ve ever seen.”