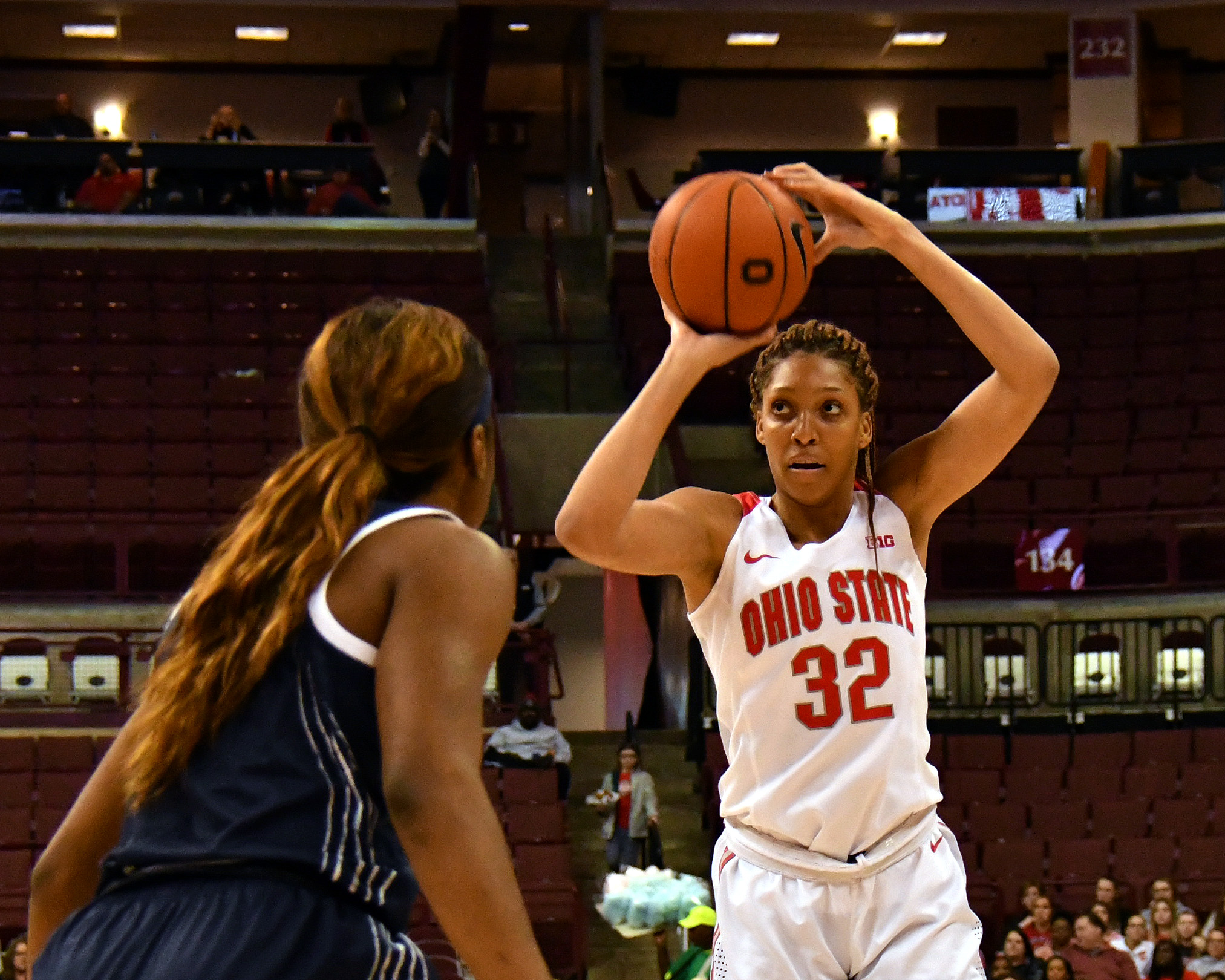 On Sunday, the Buckeyes bucked that trend, winning a second straight game with a 80-70 victory over Penn State that Ohio State head coach Kevin McGuff thought was closer than it should have been.

“We did some really good things, but I don’t think that we sustained our focus for long enough stretches, and couldn’t really impose our will on the game because of that,” McGuff said. “If we’re going to continue to improve and be the team we’re capable of being, it has to be great focus for 40 minutes.”

Sophomore forward Dorka Juhasz led the way with 23 points and 12 rebounds, making 9 of 16 from the field and 3 of 5 from three.

“I was trying to help the team with my height, and also I was feeling good in the warmup with three-point shots, so that’s why I was really confident to shoot them,” Juhasz said. “They were passing me the ball, they were finding me and I got really nice assists from Janai (Crooms) too, I was just trying to help and maybe use my height advantage.”

But Ohio State had key contributions from a lot of players in the victory. Freshman guard Kierstan Bell only played 15 minutes, but she finished with 17 points and was a major spark plug off the bench. Crooms was the same, with the sophomore guard adding 10 points, six rebounds and nine assists.

The depth showed up big in the box score, with the Buckeyes bench outscoring Penn State’s 32-4.

“Kierstan came in and gave us some electric minutes offensively, and we really needed her baskets, and Janai was outstanding with the ball in her hands,” McGuff said. “Really kind of controlled the game when she was out there, so they both were outstanding.”

After finishing the last game with a season-low nine turnovers, Ohio State again held onto the ball more than it has for much of the season. It finished with 14 turnovers compared to Penn State’s 22, and scored 26 points off the Nittany Lions turnovers, while Penn State managed only 13 points.

Ohio State took a 33-26 lead into halftime thanks to a 15-point, six-rebound performance by Juhasz in the opening 20 minutes.

But Penn State came out strong to open the third quarter, going on a 7-2 run to immediately cut the deficit to 35-33. The Nittany Lions were keeping it close early in the third thanks to Kamaria McDaniel. The junior guard, who came into the game as Penn State’s leading scorer (19.5 ppg), scored 11 points in the first five minutes of the second half. She ended the game with 22 points.

Senior guard Siyeh Frazier was the other major scorer for the Nittany Lions, finishing with 22 points as well. The rest of the team not named McDaniel or Frazier scored just 26 points.

“They’re great players,” McGuff said. “They play fast, I thought we were a little lethargic getting back in transition, make or miss, but those two guards are as good as any in the league, and they’re very special, and they played really well.”

But the Buckeyes began to pull away later in the frame, going on a 13-2 run to end a 33-point third quarter, taking a 66-50 lead into the fourth.

Penn State cut the lead down to single digits at various points in the fourth quarter, but was never able to come within eight points in the final 10 minutes. Ohio State jumped up to 3-2 in Big Ten play, while the Nittany Lions fell to 1-4.

Ohio State goes on the road Thursday to face off against Michigan State.