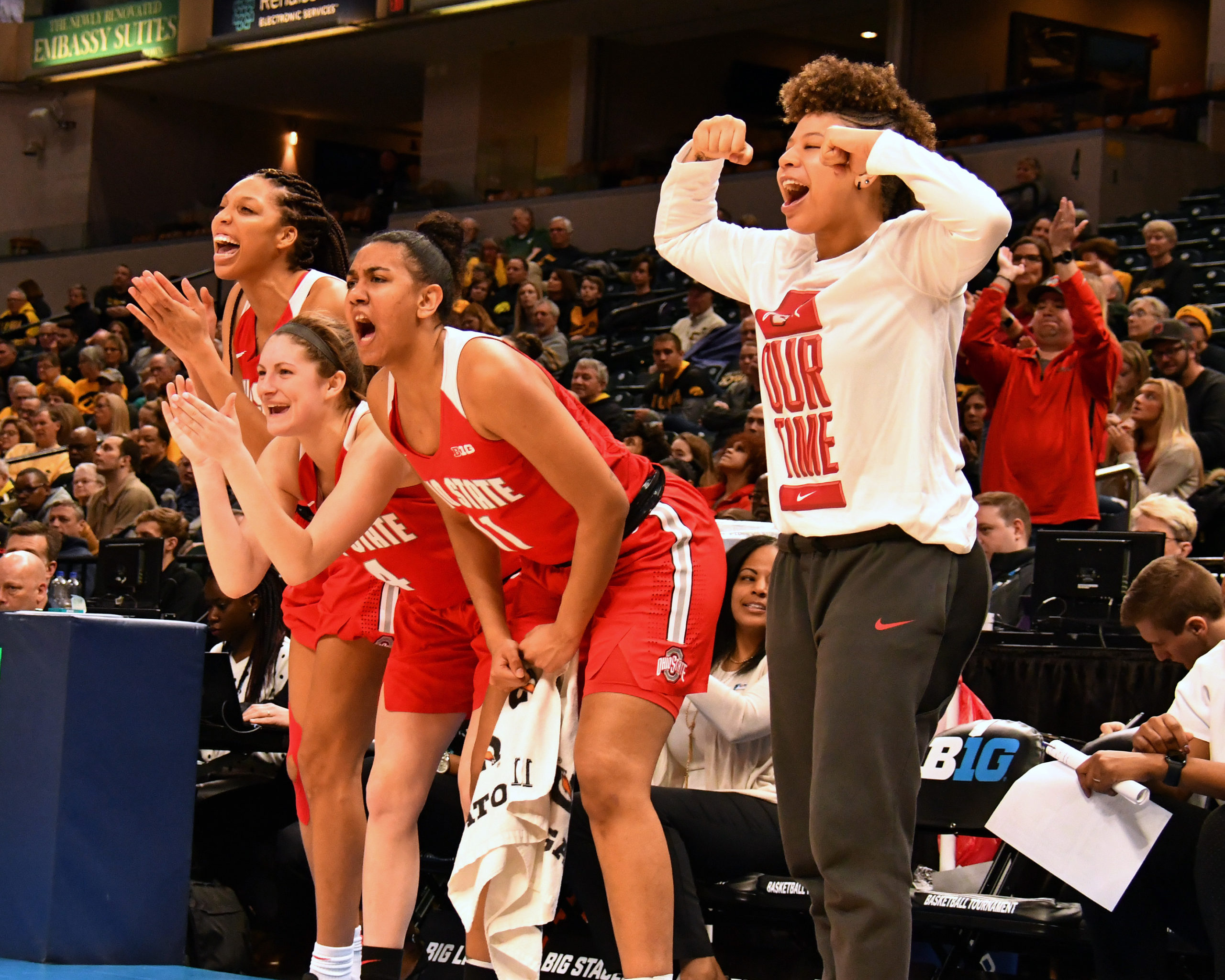 At the beginning of the 2019-20 season, Ohio State had more true freshmen on the roster than every other class year combined, bringing in seven first-year players in one of the strongest recruiting classes in the country.

With that, the goal became clear: build for the future with young talent, with the emphasis being on developing chemistry and getting the most out of what the roster’s potential had to offer.

Half of those six freshmen who played are now gone through transfers, while two of the ones who stayed – guards Madison Greene and Jacy Sheldon – locked up starting positions and the other – forward Rebeka Mikulasikova – carved out her role as an offensive threat off the bench who led the team in both field-goal percentage (50.3 percent) and three-point percentage (46.3 percent).

But there was one more member of that 2019 class who has not yet had her opportunity: Rikki Harris, a five-star guard who was ranked the sixth-best point guard and 24th-best player overall in her class. Harris was the second highest-rated member of Ohio State’s class behind guard Kierstan Bell, who has since transferred to Florida Gulf Coast.

Harris missed the entire 2019-20 season recovering from a shoulder injury and will come into the upcoming campaign as a redshirt freshman and as the top-rated Ohio State commit left from her class.

“She’s a really bright kid; she took it in stride,” Ohio State head coach Kevin McGuff told Buckeye Sports Bulletin on May 28. “Our doctors and trainers did a great job explaining the situation, and I think she took it in stride because she knew deep down that they were advising her from a standpoint of what was best for her, and then my conversations were more of the ‘Hey, let’s look at this in the long term. We want you to get healthy first. That’s going to allow you to be the best version of yourself,’ and so she was good with it.

“I mean nobody wants to go through this, but I think she understood just given where she was, this was the best thing.”

But it wasn’t all easy for Harris in her first year with the program. The 5-10 guard from Indianapolis North Central came to the Buckeyes with a long list of injuries from high school, including a pair of ACL tears and a trapped nerve in her foot which required surgery, and she also had to rehab both of her knees during her first summer at Ohio State.

These battles to stay healthy cost Harris a large portion of her high school career, but they were always injuries to her lower body, which allowed her to consistently do at least part of what she loves to do: shoot. With a new shoulder injury that required surgery, Harris had to battle through a lot off the court when the surgery, and ensuing recovery, cost her the season.

“When it happened and we chose to go with surgery, I knew I probably was going to sit out,” Harris said. “I’ve had other injuries that put me out for a year, so I knew if I worked, I knew I can handle it. Normally, it’s a leg, so I can shoot, but it was a shoulder this time so like I couldn’t even shoot, so this time was very different.

“I don’t want to say depressing, but it was. Mentally I was down, like really bad, but my teammates pushed me through, as well as my trainer.”

Harris wore a mechanical arm brace for much of the season in order to help her recover correctly from the injury. Taking it slow and making sure Harris would be fully healthy for upcoming seasons was a key emphasis for McGuff and Ohio State, as some of Harris’ injuries were a result of an attempt to play before they were fully healed.

“It was more just in the beginning like, ‘Hey, this is going to be the best thing, let’s take a long-term approach,’ ” McGuff said. “She loves to be on the court, she’s a real competitor, so it’s tough at times. For any kid it would be tough, and it especially could be tough for her because of her competitive nature, but she’s also bright, so she can understand it and process it in a way that it’s tough, but she gets it.”

Eventually, the brace was taken off, and Harris’ mind-set and energy immediately improved.

“Once I started being able to shoot again, it was just like everything changed. I was just so happy again,” Harris said. “Being able to just barely do anything with the ball has just made me a happier person, but I still didn’t let that affect how I was with my teammates.”

Next season, Harris should have her chance to show she has more than the intangibles she brought this season with leadership and energy. With Bell, guards Janai Crooms and Kaelynn Satterfield, and forward Aixa Wone all gone from last year’s team, there is room for Harris to step up and make an impact.

At the point guard position, Greene holds a strong grasp on the starting job, but Harris, as well as five-star point guard Kateri Poole from the 2020 class, has an opportunity to earn significant minutes in 2020-21.

Even though Harris was considered a five-star talent in high school and despite all that she proved on the court back in Indianapolis, McGuff was drawn to those off-court attributes that she brings to the table, the same ones that she brought in her first season at Ohio State without playing a single minute of game time.

“I think that she’ll really impact us because she’s tough, she’s physical, she’s a gritty player and she’s a great teammate,” McGuff said. “I mean she has a lot of talent, but she’s also got a lot of great intangibles, and every team needs that. We need that. We need her toughness and her grit, and I think that will really bring a lot to this team.”

The full version of this story originally appeared in the June edition of Buckeye Sports Bulletin. For four free issues of the now-monthly paper, no credit card required, sign up at the link below: http://www.buckeyesports.com/subscribe-4issue-trial/