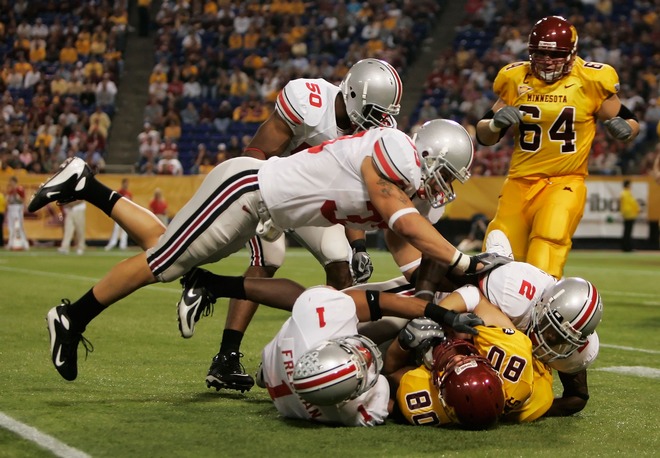 The headline: Ohio State Cruises On Day Many Ranked Teams Were Upset

Ohio State (5-0, 2-0) cruised to its fifth win of the season over Minnesota (1-4, 0-2) as running back Chris “Beanie” Wells continues strong start. His 24 carries, 116 yards and two touchdowns carried the Buckeyes to a victory against the struggling Gophers.

A full half of the country’s top 10 ranked teams went down to defeat during the last weekend in September, elevating Ohio State into the upper echelon of the national rankings just five games into what was supposed to be a rebuilding year.

It simply wasn’t supposed to happen so quickly. After all, head coach Jim Tressel had lost such star power on offense as Heisman Trophy-winning quarterback Troy Smith, NFL first-round draft choices Ted Ginn Jr. and Anthony Gonzalez and top running back Antonio Pittman, who had put together back-to-back 1,000 yard seasons.

And he was forced to replace three-fourths of his starting defensive line and half the secondary. How quickly could a team that lost so much rebound so quickly?

Ohio State rebounded because it played as a team. After defeating Minnesota, the Buckeyes would win six of the final seven games of the season. They could have won a national championship against LSU but fell to the Tigers 38-24.

Ohio State dominated the beginning of the game, controlling possession and moving the ball down the field with ease. The Buckeyes jumped out to an early lead after Wells scored two touchdowns in the opening quarter. His first score came from 6 yards out, with 6:52 remaining in the first. Wells scored a second time from 4 yards at the end of the quarter.

In the middle of the second quarter, Minnesota responded as the Gophers put together a 12-play, 64-yard drive that ended with quarterback Adam Weber finding wide receiver Ralph Spry for a 4-yard touchdown pass.

At the end of the half, the Buckeyes found the end zone for the third time. Ohio State quarterback Todd Boeckman connected with wide receiver Brian Robiskie on a 52-yard touchdown pass, capping a 4-play, 98-yard drive that started on the team’s goal line.

The Minnesota defense blocked Ryan Pretorius’ point-after attempt, so the Buckeyes entered the half with a 13-point lead.

The Buckeyes started the second half with the football. A long offensive possession ended with Pretorius kicking a 43-yard field goal through the uprights, extending the Ohio State lead to 16 points.

Ohio State would score the game’s final points via a 19-yard touchdown pass from Boeckman to wide receiver Brian Hartline with 8:59 remaining. Minnesota failed to capitalize on the rest of its offensive possessions, and Tressel directed his team to run out the clock, electing to give Wells and company some extra touches on the ground.