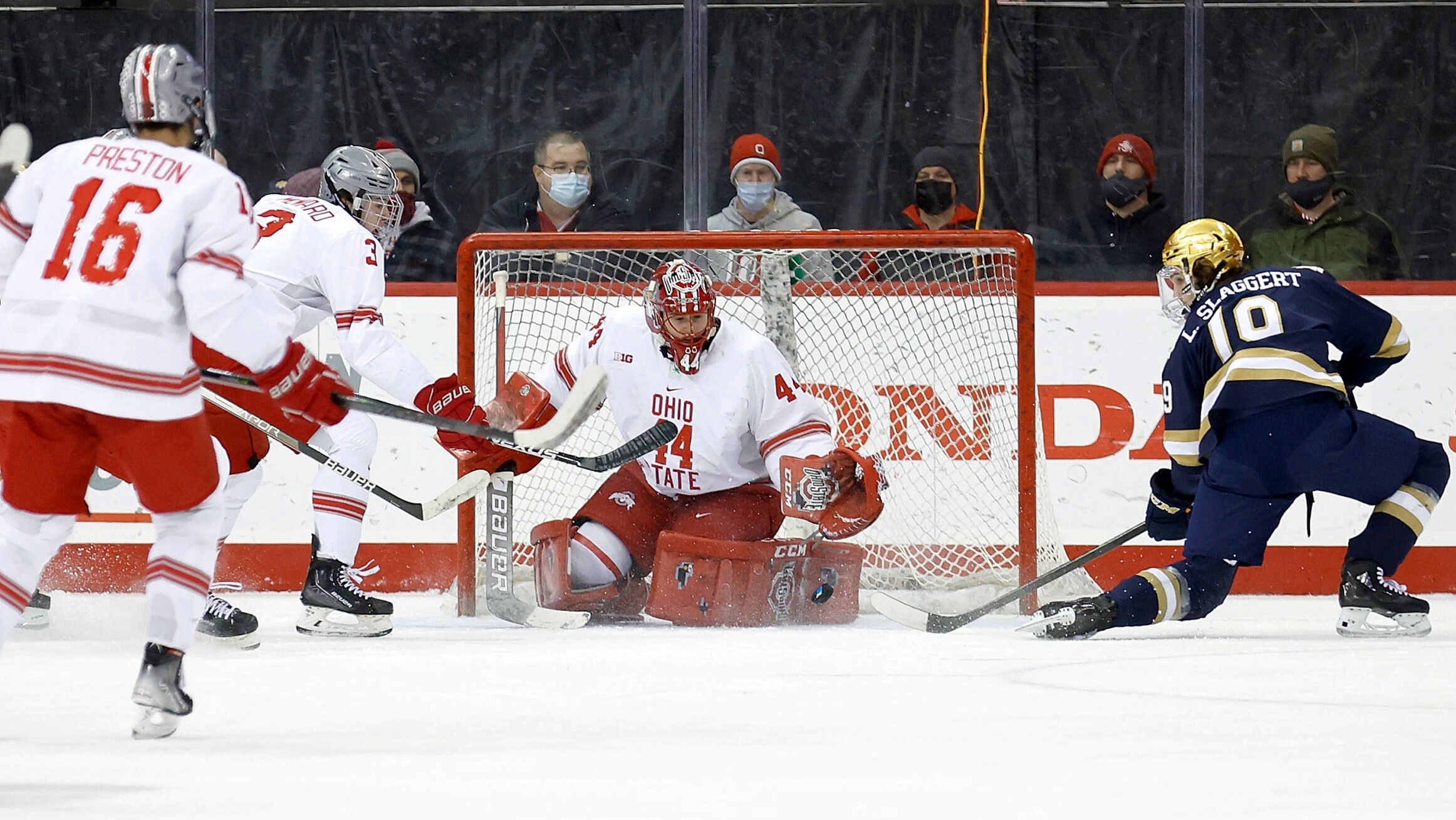 Providing the type of leadership one would hope to get from a senior captain, Quinn Preston led by example to carry then-No. 16 Ohio State to a 4-1 victory over No. 13 Notre Dame at Value City Arena on Saturday to earn the Buckeyes critical points in the Big Ten standings.

A 3-2 overtime win for the Fighting Irish on Friday leveled the teams for third place at 24 points apiece.

By winning the rematch, thanks to Preston’s hat trick and 38 saves by freshman Jakub Dobeš, the Buckeyes (16-7-1, 8-4-1-0-1-1) moved three points ahead of Notre Dame and surpassed Minnesota (25 points) to trail leader Michigan by two points.

“It was a big bounce-back win for us,” Ohio State coach Steve Rohlik said. “Sometimes when you lose in overtime it’s a huge momentum swing the other way – not with this group.”

In addition to his three goals, Preston added an assist in the second game.

“Tonight, we came off flying. I think we just flew the whole night,” he said.

He capped the scoring with a hustle goal, outsprinting two Notre Dame players to the puck before making a slick move to deposit his sixth goal of the season.

Preston then turned and bowed to the roaring crowd of 6,114. He said it was an improvised move.

“I didn’t really celly on the first two, so I figured I’d probably try to break something out,” Preston said. “It went in, and I figured, ‘Might as well.’

“It’s definitely a big moment for me. It’s really exciting, especially being here for four years, to see some pucks going in.”

“Once I realized what they were trying to do, it was just trying to track the puck and make a save,” Dobeš said. “Once they keep shooting and shooting, you stop thinking and you just try to do your best and that’s what happened.”

By taking four of six points from Notre Dame, the Buckeyes moved up a spot in the USCHO.com poll to 15th this week. The Irish remained at 13th, a strange situation considering OSU took seven of 12 points from them in the four-game season series and are ahead in the Big Ten.

More importantly, the Buckeyes are 14th in the PairWise rankings that mimic the 16-team NCAA tournament field, meaning they are currently a bubble team. Notre Dame is rated 16th.

A season-high 8,350 spectators for the game Friday included an impressive record number of students (4,205).

They were disappointed in the outcome but not the drama involved as the Buckeyes scored early, rallied late but lost quickly in the OT.

Notre Dame tied at 3:20 of the second on a goal by Graham Slaggert and younger brother Landon Slaggert made it 2-1 at 13:36 of the third.

Wise tied it for the Buckeyes at 17:10 on a delayed penalty. Dobeš headed to the bench for the extra attacker and Wise came off the bench for him to score off a pass from senior Ryan O’Connell with McWard getting the secondary assist.

“I just hopped out there and I saw (O’Connell) had the puck and there was no one in my lane,” Wise said. “So, I was just screaming for it the whole way down. I was lucky to get that pass from a great play by him.”

Notre Dame needed only 31 seconds of 3-on-3 overtime to pot the winner by Spencer Stastney to finish an odd-man rush off a turnover.

Preston opened the scoring in the rematch at 3:18 of the first with a power-play goal from McWard and sophomore Travis Treloar. Cam Burke’s shorthanded tally three minutes later tied it and there was no further scoring until 40 seconds remained in the second period when freshmen Georgii Merkulov and Cam Thiesing combined to set up Preston for the winner.

As has been the case much of the season, the third period belonged to the Buckeyes. Merkulov extended the lead to 2-1 at 4:11 from linemates Preston and Thiesing and McWard got the lone helper as Preston wrapped up the scoring at the 16:21 mark.

The Buckeyes are outscoring the opposition 46-15 in the third period. … Preston had the first four-point game of his career. It was the first time a Buckeye scored at least three goals since Carson Meyer scored four in a playoff game vs. Wisconsin on March 6, 2020. … McWard had four assists in the series and has four two-point games in his career. … Merkulov leads the Buckeyes with 12 goals and 24 points. … Dobeš is 15-6-1, with a 2.12 goals-against average and .929 save percentage.

The Buckeyes play at Michigan State on Friday (7 p.m.) and Saturday (6 p.m.). The Spartans are sixth of seven teams in the Big Ten with 14 points.