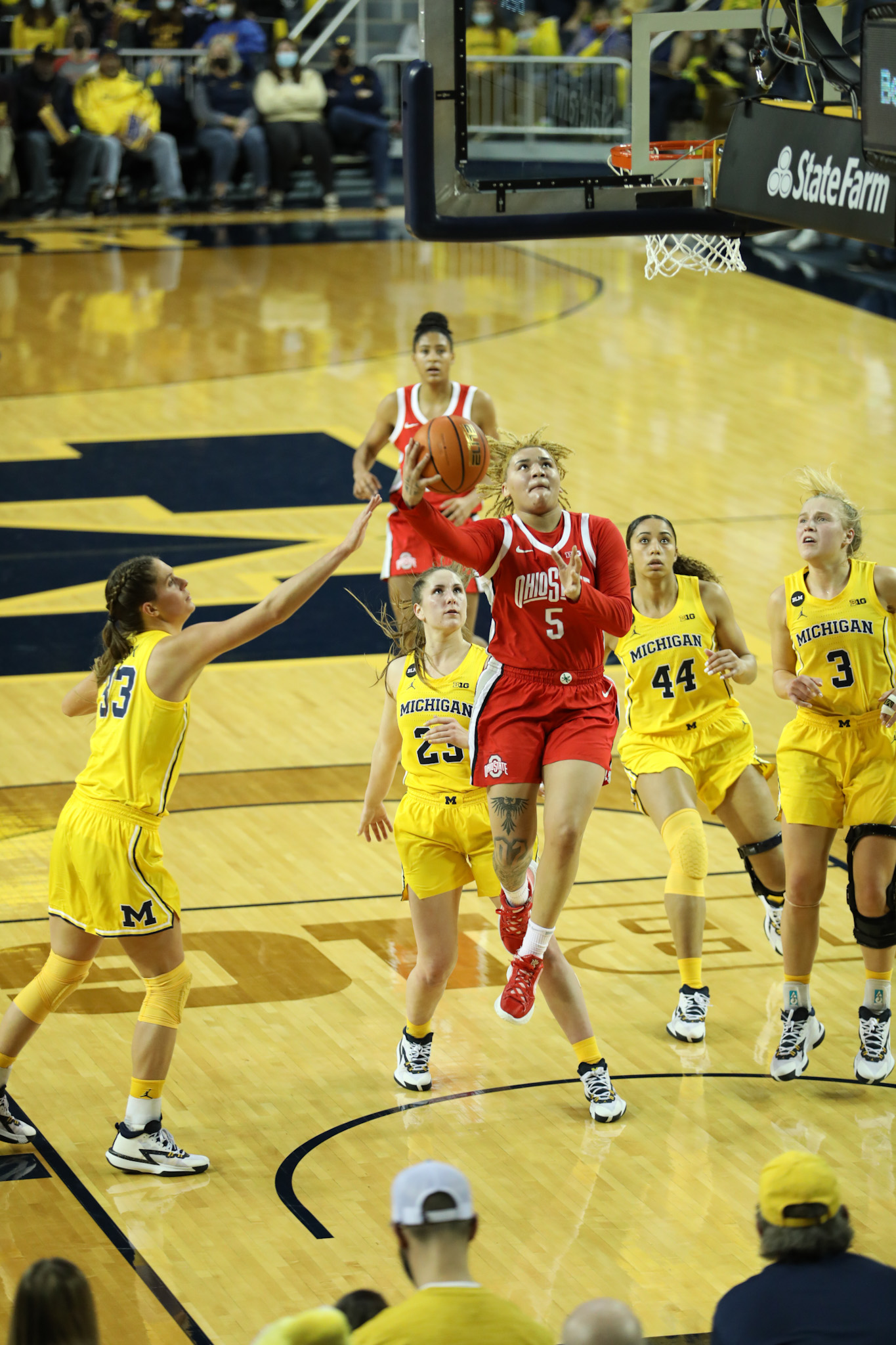 Two Michigan players notched a double-double as No. 25-ranked Ohio State suffered a 90-71 defeat at No. 9 Michigan on Friday afternoon.

The Buckeyes were without starting senior guard Braxtin Miller as well as junior guard Hevynne Bristow, who head coach Kevin McGuff indicated earlier in the week were dealing with COVID-19 issues.

Michigan’s defense, which allowed just 58.2 points per game coming into the contest, stifled Ohio State in the early stages, forcing misses on the Buckeyes’ first six shots at the Wolverines jumped out to an 8-0 lead.

Sophomore guard Rikki Harris got Ohio State on the scoreboard with a three-pointer nearly four minutes into the game, and a basket from sophomore guard Kateri Poole on the Buckeyes’ next possession made it 8-5.

The Wolverines then connected on three of their next five shots and hit five free throws to push the lead to 19-11, but a pair of baskets from Poole and freshman guard/forward Taylor Theirry, who saw increased action due to Miller and Bristow’s absences, as well as foul trouble for graduate forward Tanaya Beacham and junior forward Rebeka Mikulasikova, made it 21-17 in favor of Michigan at the end of the first.

The Buckeyes continued battling Michigan close in the second quarter, cutting the deficit to as few as two points on two occasions as senior guard Taylor Mikesell continued knocking down shots, but the Wolverines opened up a 32-26 lead with 5:25 remaining in the second.

A layup from Thierry made it 32-28, but the Wolverines then closed the quarter on a 13-3 run, boosted by four points from senior forward Naz Hillmon, who had a double-double in the first half, to take a 45-31 lead heading into the half.

As if Michigan’s late run didn’t cause enough problems for Ohio State, the Buckeyes picked up a number of critical fouls near the end of the second quarter. Poole and Thierry each had three fouls, and Mikulasikova, Beacham and junior forward Jacy Sheldon had each picked up two, leaving the short-handed Buckeyes in a tight spot.

With no shortage of efficient scorers for Michigan, the Wolverines opened the flood gates to begin the third with a 9-0 run as Hillmon, senior guard Leigha Brown and senior forward Emily Kiser, all of whom finished in double digits, connected on baskets during the run.

It took nearly three minutes for the Buckeyes to score, but after making it a 58-37 deficit, the Buckeyes closed the quarter on a 16-9 run to make it 67-53 going into the final frame.

The Wolverines continued dominating in the fourth as Ohio State’s squad began fouling out of the contest, and the Buckeyes eventually fell 90-71.

Sheldon was Ohio State’s leading scorer with 26 points as the Buckeyes shot 38.4 percent from the field, their second-lowest mark of the season (36.4 percent, Indiana). Hillmon led the Wolverines with 29 points while she and Kiser tied with a team-high 15 rebounds.

The Buckeyes finished with a season-high 27 fouls, as Beacham, Mikulasikova and Harris fouled out, and Poole, Sheldon and Thierry each finished with four.

Ohio State’s Monday matchup with Penn State has been postponed indefinitely, meaning the next scheduled contest for the Buckeyes is this Thursday against Illinois, with tip set for 7 p.m.