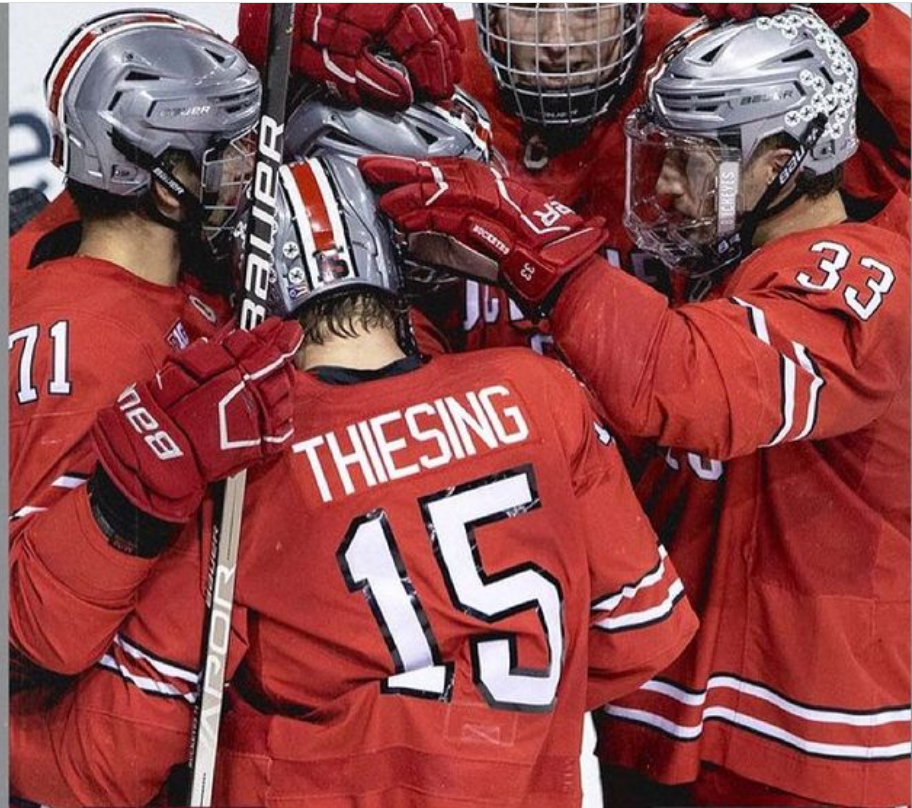 Ohio State went into East Lansing and swept Michigan State to surge into a first-place tie with Michigan in the Big Ten.

A 9-1-1 surge in the past 11 games moved the Buckeyes atop the standings with Michigan at 33 points with eight games remaining. Minnesota is third with 27 points in two fewer games played.

“It’s always hard to win in college hockey, especially on the road, and to win two is even tougher,” Ohio State coach Steve Rohlik said. “Credit to our guys. Michigan State played hard, but we held on at the end.”

The Buckeyes continue their climb in the PairWise rankings that mimic the selection committee for the 16-team NCAA tournament. OSU rocketed from 14th last week to ninth this week, a spot ahead of Minnesota. Michigan is first.

Ohio State is in a solid spot to make the tourney outside of the automatic qualification for winning the Big Ten tournament.

But that’s down the road. The Buckeyes need to continue to get results like this past weekend against the lower tier teams in the conference. They play this Friday and Saturday at Penn State, which is tied for fifth place with Michigan State and Wisconsin at 16 points.

Two things to note. Both the Golden Gophers and Wolverines will be missing several top players because of the Olympic tournament next month in China.

Also, the Buckeyes are idle the last week of the Big Ten season Feb. 25-26 because it’s a seven-team league, meaning they need to bank as many points as possible while they sit at home and watch the other teams play.

Here’s how the tournament works:

The No. 1 seed and three quarterfinal winners advance to the single-elimination semifinals, to be hosted by the top seed and the highest remaining seed on March 12. The highest-seeded team remaining after the semifinals will host a championship game scheduled for March 19.

Michigan State took a 1-0 lead in the series opener before the Buckeyes scored four unanswered goals.

Tanner Kelly put the Spartans ahead at 6:20 of the first period. Junior Tate Singleton tied at 16:51 of the first on a breakaway from a pass by freshman Mason Lohrei.  OSU had a 16-3 shot advantage in the period.

The Spartans had great opportunities in the second with seven minutes of power-play time due to a minor penalty at 4:11 and a five-minute major at 6:27. OSU allowed just five shots in total during those shorthanded situations.

Energized by the penalty kills, freshman Cam Thiesing one-timed a set-up by freshman Georgii Merkulov at 16:43 for a 2-1 lead.

Freshman Jakub Dobeš made 31 saves and the next night he stopped 40 of 42 shots to help lead the sweep.

Thiesing made it 1-0 at 4:12 of the first from Lohrei and senior Quinn Preston. Merkulov scored at 5:38 of the second period from Preston and Thiesing.

“It’s always a great feeling winning on the road and an even better feeling getting a sweep,” Gabriele said. “It definitely wasn’t our ‘A’ game tonight, but we found a way. We can enjoy the win, but it’s back to work this week to clean up some things before we head to Penn State.”