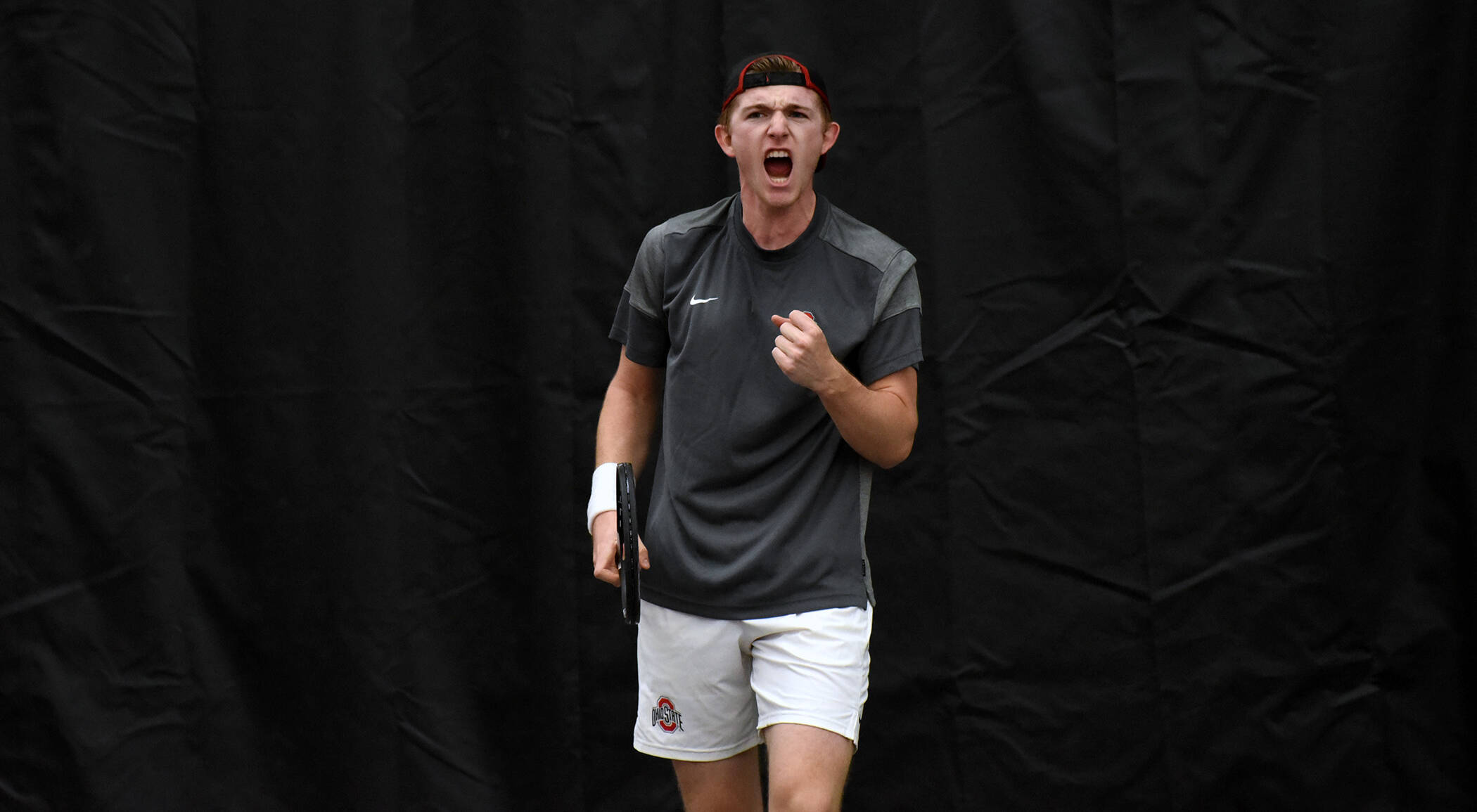 Ohio State men’s tennis dominated Illinois in a 4-0 victory on Friday. The No. 1 and No. 2 ranked doubles duos — Matej Vocel and Robert Cash plus James Trotter and Justin Boulais — made their debut for the sixth-ranked Buckeyes, earning significant wins.

The match with the No. 23 Fighting Illini also marked Cash’s season debut, where he had the performance of a perfect single, losing zero games in a 6-0, 6-0 straight-set victory.

The Buckeyes (3-0) recorded their ninth win in the last ten matches against Illinois, including four sweeps. They set the tone early on Saturday and clinched the doubles point with Vocel and Cash’s 7-5 win on court one and Boulais and Trotter’s 7-6(3) win on court two.

Ohio State earned three straight-set victories to seal the 4-0 victory in singles. Cash bested his opponent with a 6-0, 6-0 win. Vocel followed with a dominant 6-2, 6-1 win against Hunter Heck on court two and JJ Tracy sealed the team victory with a third straight-set win in his convincing 6-2, 6-0 defeat of Lucas Horve on court four.

The Buckeyes defeated Toledo and Xavier in their opening day tri-meet earlier in the week. Ohio State won both matches inside the Ty Tucker Tennis Center, outscoring their opponents 13-1 across both competitions.

Ohio State women’s hockey defeated No. 8 Minnesota Duluth on Saturday afternoon, 3-1, splitting the weekend series after falling to the Bulldogs 1-0 on Friday night.

Forward Jenna Buglioni scored the first goal for the No. 2 Buckeyes, allowing them to start the match in the driver’s seat. Defenseman Sophie Jaques drove to the net, sending a cross-crease pass to Buglioni, who put the shot into the back of the net. Foward Jenn Gardiner also earned an assist for the goal.

Ohio State scored again in the opening period, and this time Jaques did it herself. The senior recovered the puck at center ice and took it all the way, firing a backhanded shot after recovering her initial rebounded attempt.

The teams went scoreless in the second 20 minutes. Still, Ohio State dominated the frame with 17 shots and held Minnesota-Duluth to only six attempts. The Buckeyes netted their final goal at 15:17 in the third. Center Clair DeGeorge connected with forward Paetyn Levis to put their team up 3-0. The Bulldogs scored the match’s last goal at 15:31. Amanda Thiele made 18 saves for Ohio State and held a clean sheet until that point.

Ohio State stays at home for another ranked matchup against No. 5 Minnesota on January 28-29. Puck drops from the OSU Ice Rink at 6 p.m. Friday and 3 p.m. Saturday on Big Ten Plus.

After a 10-win day for the Buckeyes on Friday, the Buckeyes raced and dove to eight more wins on Saturday. Hunter Armstrong had a four-victory weekend, including a win in the 100 freestyle on Saturday. Alex Quach swept the butterfly events and Josie Panitz swept the breaststroke events for the women.

Jacob Fielding’s win on 3-meter Saturday gave him a sweep on the springboard and Mackenzie Crawford won first place on the 1-meter on Saturday with 284.05 points. Charlie Clark won the 1,650 freestyle, Thomas Watkins took the 200 backstroke and Amy Fulmer won the 100 freestyle on Saturday.

Ohio State women’s tennis team dropped a second straight road match to a Top 10 opponent, falling 4-3 at No. 8 North Carolina State on Sunday in Raleigh, N.C. The No. 10 Buckeyes lost to No. 6 Duke on Friday.

The Wolfpack won the doubles point and the first singles match before Ohio State tied the match with three-set wins from Isabelle Boulais and Sydni Ratliff. North Carolina State took the next match, but No. 6 Irina Cantos Siemers defeated No. 8 Jaeda Daniel to deadlock the team score at three.

Shelly Bereznyak had a chance to win the match for Ohio State but fell short of defeating Amelia Rajecki of the Wolfpack. Rajecki won 7-6 (7-5), 6-2 to secure a victory for NC State.