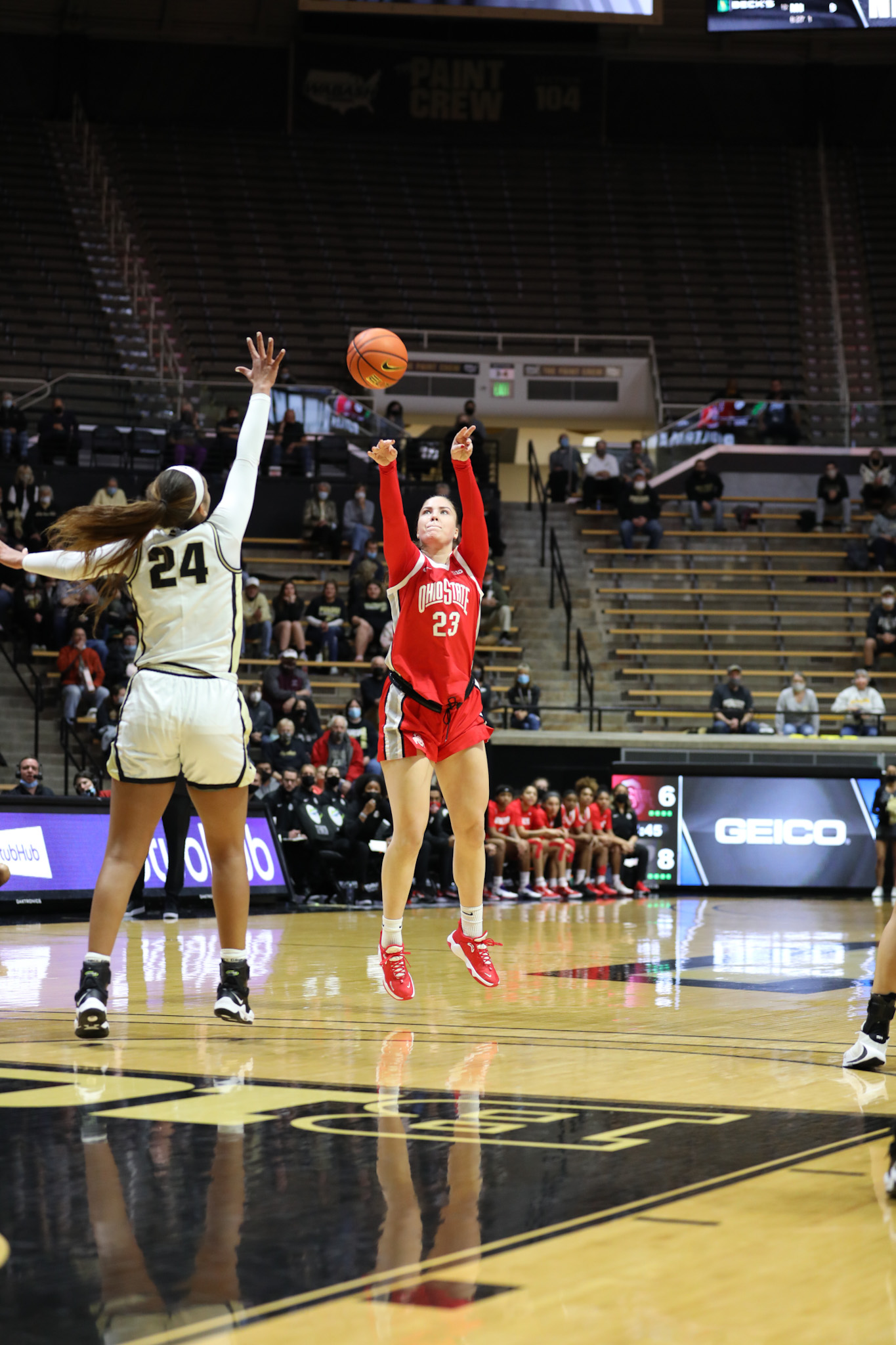 Ohio State (6-1) came out on top in a battle with Purdue (6-3), taking home a 70-53 win in Sunday’s Big Ten opener thanks to a double-double by senior guard Taylor Mikesell.

The Buckeyes have become accustomed to fast starts on the offensive end this season, but this was not one of those occurrences. Ohio State got off to a 6-0 run, but eight straight from the Boilermakers, including two three-pointers, made it 8-6 with five minutes to go in the first.

Back-to-back baskets from junior forward Rebeka Mikulasikova and Mikesell (a three-pointer) gave the Buckeyes the lead back, 11-10, and they would go on to finish the first frame up 17-13.

Both teams stepped up defensively in the second quarter, as Purdue outscored the Buckeyes just 9-7, but still trailed 24-22 headed into the half.

Ohio State’s offense finally woke up in the third, opening things up with an eight-point run to make it 32-22. Purdue battled back, capitalizing on some mistakes by the Buckeyes, to make it 40-33 with 5:32 left in the third.

From there, the team’s combined for a scoreless streak that last nearly three minutes, included eight missed shots (five by Ohio State, three by Purdue) and three turnovers. Mikesell finally broke the drought with under three minutes remaining, knocking down a three-pointer to give the Buckeyes a 10-point lead, 43-33.

Purdue refused to let up, however, making it a five-point game, 45-40, heading into the fourth.

It was at this point that Ohio State’s defense, which struggled in the team’s previous game, a loss to Syracuse, stepped up to help secure the win.

Sophomore guard Rikki Harris and Mikulasikova got a pair of baskets to give Ohio State a 49-40 lead, but the Boilermakers responded with a pair of their own to make it 52-44. From there, the Buckeyes took off on a 9-0 run in which they were 4 of 4 from the field, while Purdue was 0-6 and had a turnover.

Leading 61-44 with just under four minutes remaining, the Boilermakers got the deficit to as few as eight points, but were never able to get close to the lead in Ohio State’s 70-53 win.

Senior guard Braxtin Miller and Mikesell tied for the team lead with 16 points, while Mikesell led with 10 rebounds. As a team, Ohio State was 25 of 50 from the field, while the Boilermakers were held to just 21 of 71 (29.6 percent). Madison Layden led Purdue with 13 points.

Following the team’s two-game road trip, the Buckeyes will return home to face Mount St. Mary’s on Tuesday at 7 p.m.