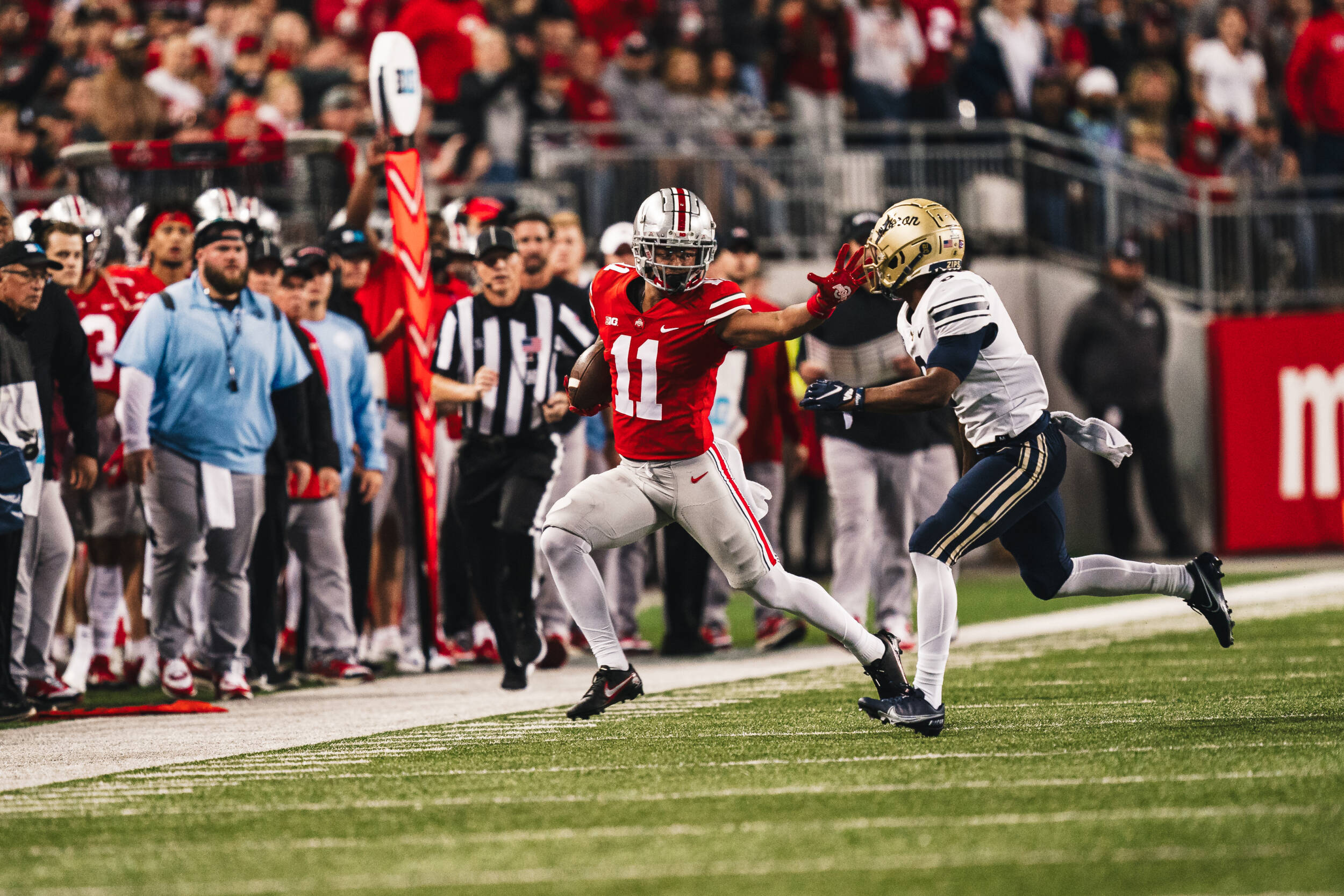 Kyle McCord threw for 319 yards in his first career game and TreVeyon Henderson and Master Teague each rushed for two touchdowns when No. 10 Ohio State trounced Akron 59-7  before 95,178 at Ohio Stadium on Saturday night.

The Buckeyes (3-1) spotted the Zips (0-4) a 7-0 lead before storming to a 38-7 halftime lead thanks in part to a defense that produced a score and pressured Akron quarterback DJ Irons.

McCord replaced redshirt freshman C.J. Stroud, who in his first three career starts struggled with a sore shoulder and coach Ryan Day decided to rest him. McCord was a 2021 five-star prospect from Philadelphia’s St. Joseph’s Prep.

Ronnie Hickman had a pick-six in the first half and the OSU defense registered seven sacks after having four through the first three games.

After an Akron punt on the game’s first drive, McCord took his first snap and handed to Henderson, who rambled for 12 yards to the OSU 21. McCord then missed Garrett Wilson to the right sideline, threw a back pass that counted as minus-6 on a rush and misfired to Jaxon Smith-Njigba to necessitate a punt.

The Zips promptly went 55 yards on nine plays while taking 4:40 off the clock to assume a 7-0 lead when Irons threw a 4-yard pass to Konata Mumpfield on a botched play. The snap was high but Irons recovered and found Mumpfield open to the left.

Mumpfield on the prior play had a 17-yard catch on third-and-3 from the 21. Earlier, Irons had a 16-yard run and Tristian Brank had an 8-yard catch on a third-down conversion to the Ohio State 28.

McCord moved the Buckeyes 75 yards in six plays and a crisp 2:00 to tie it 7-7 at 5:27. The series began with a 22-yard completion to Smith-Njigba. Henderson ran for 8. Following an incompletion, Henderson raced 35 yards to the 10. He carried for 5 more yards before a jet sweep to Chris Olave resulted in a 5-yard TD pass, the first of McCord’s career.

Ohio State needed only three plays to travel 73 yards to make it 14-7 with 11 seconds left in the first quarter. Wilson caught a pass behind the line and weaved his way 57 yards to the 16. Henderson pushed his way 13 yards, then scored from the 3. He had 76 yards on six carries in the quarter.

It soon became 28-7 after Cody Simon’s interception at the OSU 46. An illegal block on the return started the drive at the Akron 40. Henderson gained 3 and Smith-Njigba followed with a 23-yard grab to the 14. Henderson used his blocking to go 14 yards untouched to the end zone.

Hickman’s pick-six at the 4:43 mark, his second INT in as many games, upped the score to 35-7. The ball went off the hands of Brank and Hickman took it 46 yards.

Ohio State got the ball back at its 47 with 14 seconds left in the half after a punt. McCord connected on a 39-yarder to Wilson with seven seconds remaining to set up a 32-yard field goal by Noah Ruggles with two ticks left for a 38-7 lead.

McCord at the half was 11 of 15 for 229 yards and the two TDs. Henderson rushed for 93 yards on eight attempts with a pair of scores  and did not play after the half. The defense had four sacks and two picks.

McCord threw his first interception on the Buckeyes’ opening drive after halftime  – Charles Amankwaa picked him off at the Akron 43 and returned it 11 yards to the OSU 46 – but he made up for it in a big way the next time OSU got the ball.

His short throw to frosh Emeka Egbuka turned into an 85-yard gain to the 2. Master Teague carried it in from there for the 45-7 lead at 10:56. It was Egbuka’s first career catch.

McCord was 13 of 18 for 319 yards before being replaced by redshirt freshman Jack Miller in his first appearance of the season. Miller played briefly in two games last season without throwing a pass.

Miller guided the Buckeyes 85 yards in eight plays over 2:47. Teague had four carries for 33 yards, the last a 15-yarder for the score with 4:14 left in the third. Miller had passes of 25 to Cade Stover and 12 to Gee Scott.

Evan Pryor in his debut scored on a 12-yard run with 2:47 for his first career score. He had four rushes for 23 yards and Miyan Williams added a 15-yard rush on the drive to  make it 59-7.

Wilson had four catches for 124 yards; Smith-Njigba had 93 yards on five receptions. … McCord became the fourth true freshman QB to start for the Buckeyes after Art Schlichter in 2008 (Penn State), Terrelle Pryor (2008, Troy) and Braxton Miller (2011, Colorado). … Along with Henderson, it was the first time Ohio State started two true freshmen in the backfield.