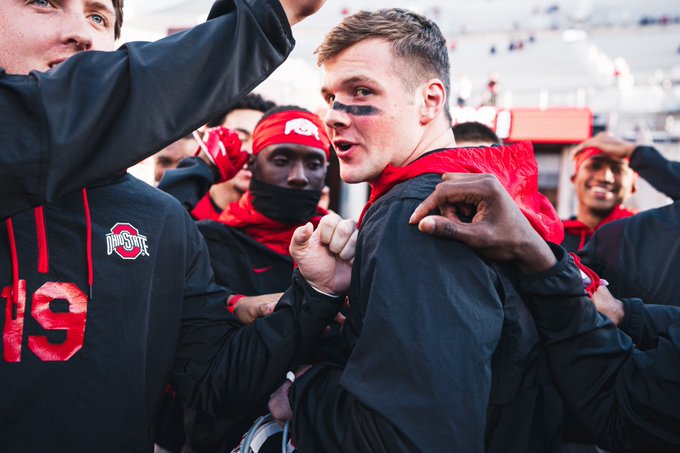 Garrett applied pressure in a variety of ways against the Zips. He worked from the nose tackle and from three-technique to create constant issues for the Akron offensive line. In recent weeks, he’s come close to sacking the opposing team’s quarterback on multiple occasions but came up just short. This week, Garrett finished the job with some menacing takedowns.

Ohio State finished with nine sacks against Akron. Interestingly enough, seven of the nine sacks came from defensive tackles, with Garrett as the headliner. The fifth-year defensive tackle led Ohio State with three, Tyleik Williams had two, and Antwuan Jackson, Jerron Cage, Jack Sawyer each had one.

Let’s get the necessary disclaimers out of the way early here. Yes, it was Akron. A really bad, really overpowered Akron team, especially on defense. The Buckeyes could have tossed just about any quarterback out onto the field and found success on Saturday against this group of Zips. Akron has won once this season and probably won’t do it again.

And yes, Ohio State’s offense was rudimentary, especially early in the game. Ryan Day stripped the system down to the studs to make things easier on Kyle McCord, dialing up a healthy dosage of screens and handoffs to TreVeyon Henderson, who was excellent once again.

But, for his first career start, McCord put forth about as good a performance as he could have hoped. As anyone could have hoped. He was 13-of-18 passing for 319 yards and two touchdowns. He had a bad interception, sure, and underthrew one of his two touchdown passes, but against a bad defense, McCord excelled, just as he was supposed to. Will he depose C.J. Stroud with this performance? Almost certainly not – nor should he. But when he needed to step up and fill in, McCord more than did his job. Slap a sticker on that helmet.

It was admittedly easier to find those deserving of Buckeye leaves following the Akron thumping. Kyle McCord would be a natural choice for turning his first collegiate start into victory, but I’ll go with the guys who made McCord’s evening a more comfortable one — Garrett Wilson and Jaxon Smith-Njigba.

Wilson caught four passes for 124 yards (a tidy 31.0-yard average) while Smith-Njigba was targeted six times and had five receptions good for 93 yards and a touchdown. JSN really bailed out McCord early in the second quarter, committing a holding penalty on an Akron defender who might have had an interception, and then three plays later making a smooth route adjustment that resulted in a 34-yard touchdown.

I’ll pass out one more leaf to Master Teague for keeping his head on straight while TreVeyon Henderson and Miyan Williams have apparently passed him on the depth chart. We unfortunately saw how at least one players dealt with what he believed was not enough playing time, but Teague keeps plugging away despite the fact his carries dwindle. He had another 71 yards and two touchdowns on just eight attempts vs. Akron.