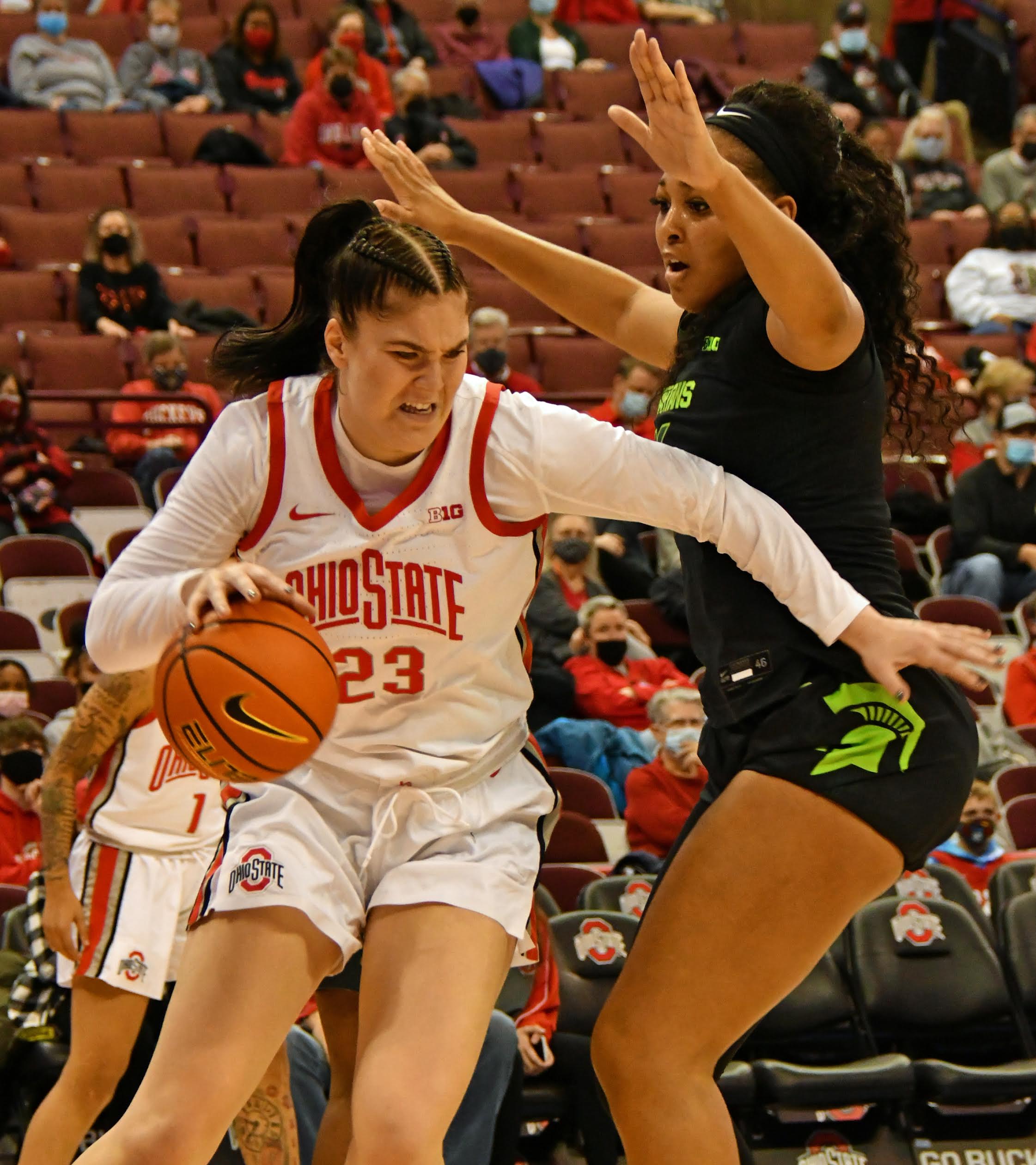 After the Spartans took a 31-21 lead with 8:27 remaining in the second frame, the Buckeyes held Michigan State without a basket for nearly seven minutes, holding the Spartans to 0-of-10 shooting during the stretch to go with three turnovers, eventually taking a 46-35 lead into the half.

Then, late in the fourth, Michigan State made it a four-point game, 80-76, with just over two minutes to go, but sophomore guard Rikki Harris respond with a triple to put the game out of reach, securing the 89-83 win.

It was an electric start to the game at Value City Arena, as the teams combined to make 10 of 16 shots as Ohio State led 13-12. The Buckeyes knocked down three 3-pointers in the first four minutes, one each from junior forward Rebeka Mikulasikova and senior guards Taylor Mikesell and Braxtin Miller.

Sophomore guard Kateri Poole, who suffered a left shoulder injury in Ohio State’s 74-61 win over Northwestern on Sunday, was out for Wednesday’s contest. Redshirt sophomore guard Rikki Harris started in her place, but it was junior guard Jacy Sheldon that handled Poole’s ball-handling responsibilities.

After Ohio State took the one-point lead, the Spartans took off on an 8-2 run to take a 21-15 lead, and later increased it to 27-18 at the end of the first quarter following three turnovers by the Buckeyes.

Ohio State then allowed just eight points on 3-of-14 shooting from the Spartans in the second quarter, including five turnovers, after giving up 27 points in the first. Late baskets from Mikulasikova and Mikesell gave the Buckeyes a 44-35 lead, and Harris was then fouled on a 3-point attempt at the buzzer and knocked down two free throws to make it 46-35 going into the break.

The Spartans then opened the third quarter on a 14-9 run to make it 55-49 with 4:56 remaining, forcing head coach Kevin McGuff to call a timeout as Michigan State hit from deep on consecutive possessions.

Out of the timeout, Sheldon connected on a triple and hit a layup on back-to-back possessions to push the lead to double digits, 60-49, though graduate forward Tanaya Beacham picked up her fourth foul soon after, leaving the Buckeyes short on help in the post for the remainder of the game.

It was no matter, however, as Mikulasikova scored four points and brought down four rebounds in the third as Ohio State finished the quarter with a 71-57 lead after a deep 3-pointer from Mikesell near the end of the frame.

Early in the fourth, Michigan State connected on a triple, and following a turnover by the Buckeyes, got a layup to make it 71-64 with 8:08 remaining. After further miscues by Ohio State, the Spartans made it a six-point game, 75-69, but Sheldon hit another three to make it 78-69. The Buckeyes would go on to win 89-83.

Sheldon finished as Ohio State’s leading scorer with 33 points, a new career-high, on 12-of-15 shooting, and also led the Buckeyes with six assists. Mikulasikova pulled down a team-high 11 rebounds to go with 13 points for her third double-double of the season, while Matilda Ekh led the Spartans with 27 points.

The Buckeyes will head on the road next to face Minnesota on Saturday at 6 p.m. The game will be broadcast on B1G+.