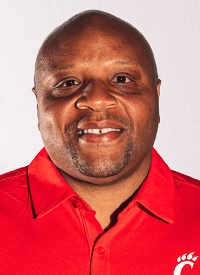 Ohio State has found its replacement for Matt Barnes, who departed from the school for the defensive coordinator position at Memphis on Jan. 2, and it didn’t even need to leave the state. Cincinnati cornerbacks coach Perry Eliano is headed to Columbus, where he’ll join a defensive staff in flux, which has already seen one departure and seems to be headed for more, given the hire of Jim Knowles as defensive coordinator.

Eliano spent two seasons with Luke Fickell at Cincinnati and produced a pair of award-winning cornerbacks in Ahmad “Sauce” Gardner and Coby Bryant, both of whom are former three stars that developed largely under Eliano’s guidance. The former has been projected as one of the first cornerbacks to come off the board in the upcoming NFL Draft after a career that saw him play three years without surrendering a touchdown. The latter claimed the Jim Thorpe award this season, given to the nation’s best defensive back.

A Texas native who played defensive back at Stephen F. Austin from 1996-99, Eliano began his career as a graduate assistant at his alma mater, before jumping to a full-time role at Central Arkansas from 2003-04. He left for a season to coach safeties at Sam Houston State before returning to Central Arkansas from 2006-10. He made his leap up to the FBS level with UTSA, joining the program in its first season of existence in 2011 to work as a special teams coordinator and safeties coach under Larry Coker, where he’d remain until 2015.

He bounced to Bowling Green in 2016-17 to work under Mike Jinks in his first defensive coordinator role, but returned to the Southwest in 2018 after Jinks was fired, taking over as the special teams coordinator and cornerbacks coach at New Mexico under Bob Davie for two seasons before Fickell plucked him for his current role.

It’s unclear who will join him on Ohio State’s staff defensively short of Knowles, as the Buckeyes have not yet offered official confirmation on any coaching moves, though Lettermen Row has reported that Ohio State is expected to grab former Buckeye player and current Jaguars assistant Tim Walton to coach cornerbacks. Both Kerry Coombs and Al Washington have been projected by Lettermen Row to be moving on.

“Another secondary coach from outside the program is expected to be confirmed by the end of the week as well. Lettermen Row sources have indicated that Tim Walton is the frontrunner for that position, but no official announcements have been made by the program.

“These moves will mean that veteran secondary coach Kerry Coombs and linebackers coach Al Washington will not return to the Buckeyes.”