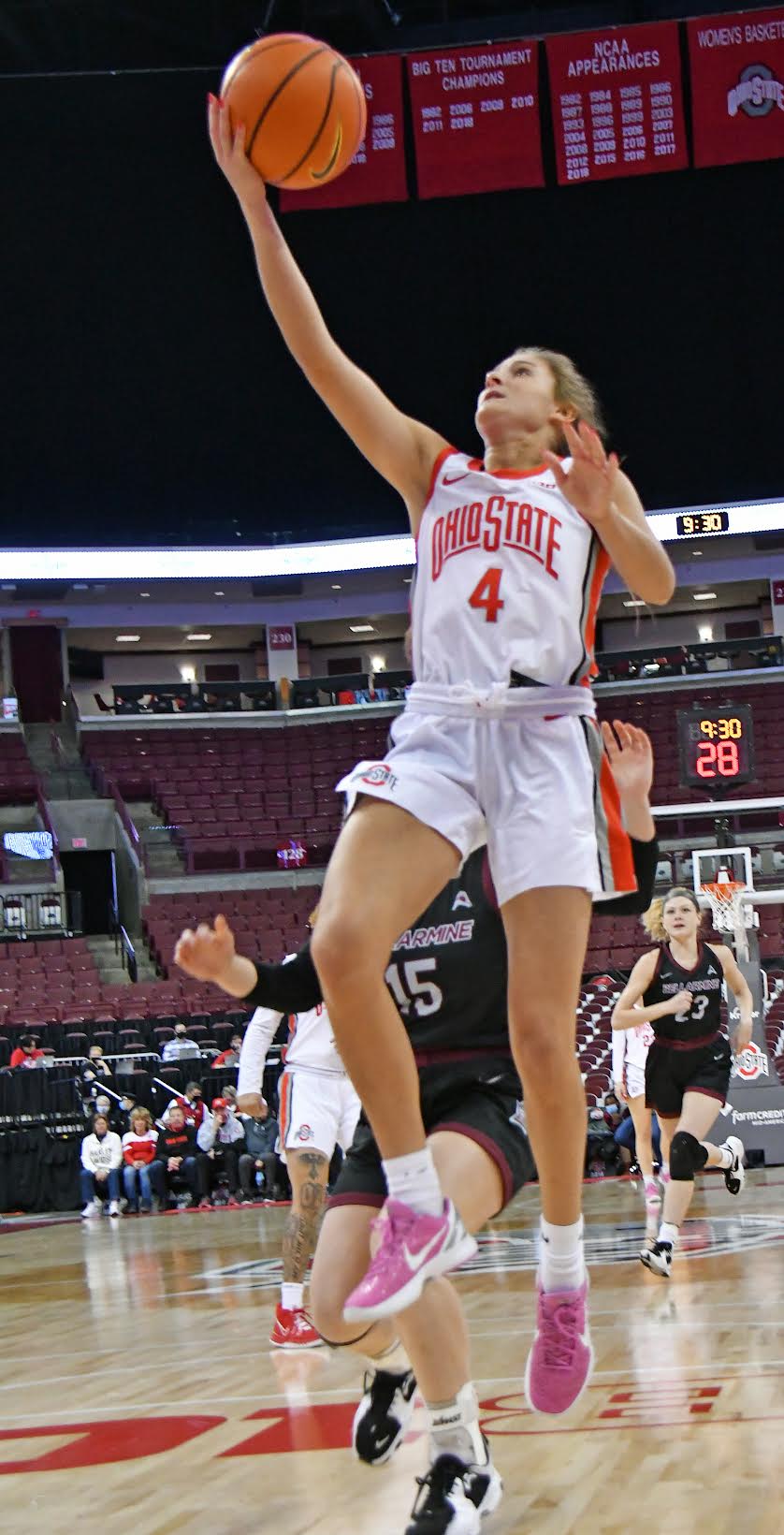 Ohio State continued its high-scoring start to the season with an 86-50 win over visiting Cincinnati on Nov. 27 to move to 5-0 on the season.

Not wanting to let momentum from the team’s 110-58 thrashing of Bellarmine, Ohio State kept that same energy going in the early stages against the Bearcats.

Junior guard Jacy Sheldon scored a layup on the Buckeyes’ first possession, and again just seconds later following a Bearcat turnover. On Ohio State’s next possession, senior guard Taylor Mikesell connected on a three-pointer to give the Buckeyes a 7-0 lead, forcing Cincinnati head coach Michelle Clark-Heard to call a timeout just 59 seconds into the game.

The Buckeyes would go on to shoot the lights out in the first 10 minutes, finishing 12 of 17 from the floor (70.6 percent). Despite the Bearcats shooting 50 percent and outrebounding Ohio State 8-3 in the first quarter, they were limited to just 12 shots due to 12 turnovers, giving an already explosive Ohio State offense extra possessions.

The Buckeyes closed the quarter on a 10-0 run to make it 33-12, the second 30-point quarter in as many games for Ohio State.

The second quarter was not as prolific for Ohio State on the offensive end. The Bearcats opened the second frame with a 10-5 run to make it 38-22, but junior forward Rebeka Mikulasikova scored the Buckeyes’ next two baskets to push it to 42-22.

Sheldon and sophomore guards Kateri Poole and Rikki Harris would score the only other points in the second for Ohio State, who went into the half with a 47-27 lead.

In the third, Mikulasikova continued to make her presence felt, leading the team with seven points on 3-of-3 shooting. The Bearcats were further held at bay on their own offensive end, scoring just 12 points as Ohio State’s defense continued to clamp down.

Mikesell added another three-pointer as graduate forward Tanaya Beacham got involved with two baskets to make it 69-39 going into the fourth.

Up 30 points headed to the final frame, McGuff got another chance to clear out his benches, with 11 players seeing action in the contest. Ohio State would go on to score 17 points in the fourth for the 86-50 final.

Mikulasikova led the Buckeyes with 19 points on 7-of-8 shooting, tying a career high. Sheldon and Poole tied for the lead with five assists each, while freshman forward Taylor Thierry led with six rebounds.

The Buckeyes will head on the road for the first time this season to take on Syracuse on Dec. 1 at 8 p.m. on the ACC Network.