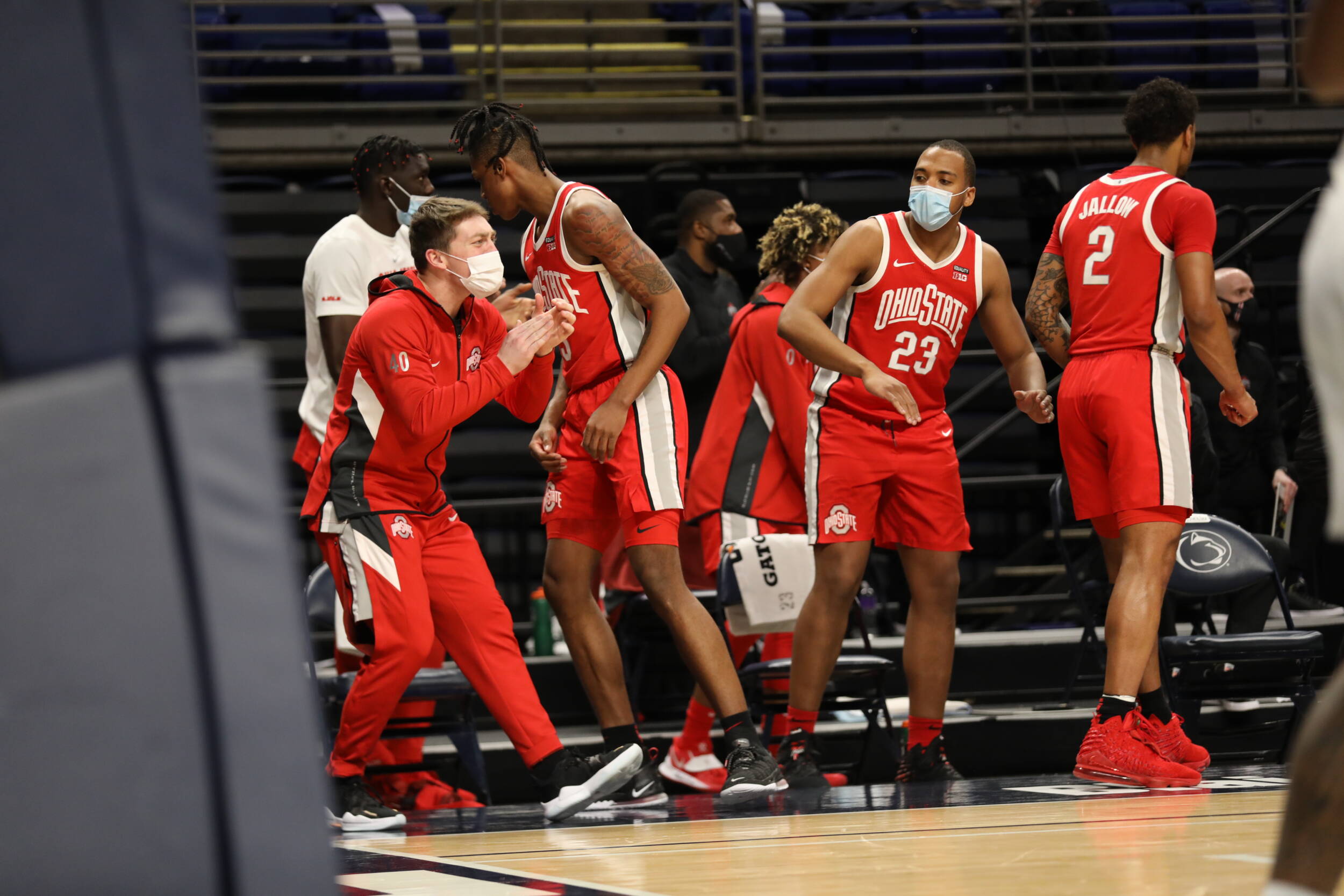 The 2021-22 Ohio State men’s basketball roster picked up a significant boost on Friday when it added Louisiana senior guard Cedric Russell to the fold. Russell is an elite scorer from beyond the arc and at the hoop, shooting a whopping 40 percent from three-point range on just over seven attempts per game, which would have put him at No. 2 on Ohio State’s roster in volume last season, behind the man he’s set to replace in Columbus – Duane Washington Jr., Ohio State’s leading scorer in 2020.

Perhaps it’s not a fair assignment for the Louisiana native. There’s a reason that Washington spearheaded the Buckeye attack in 2020, and a reason that he’s a serious contender for being selected at the 2021 NBA Draft, which he departed Ohio State for. Expecting any player – even one as prolific as the former first-team Sun Belt selection – to replicate the production of a player about to get paid for his scoring ability is setting the bar very high.

Still, this Buckeye roster needs someone to do it. Washington was the most confident and competent one-on-one scorer on Ohio State’s roster last season by a large margin. Youngsters like Meechie Johnson and Malaki Branham have flashed that kind of ability, and the return of E.J. Liddell does provide scorer, but the former two are still developing, and the latter couldn’t be much further from the aggression and bravado that Washington played with on the perimeter. He should be able to hover again around that 16-point mark he hit last season, but Liddell’s game is as a throwback, draining mid-range shots with ease and scoring comfortably off the pass, not from his own dribble.

Unless Penn State transfer Jamari Wheeler is suddenly a completely different player offensively; or if returning senior Jimmy Sotos has another gear on offense that he simply didn’t show in 2020, that leaves the job to Russell. Whether he can fill the vacancy sufficiently or not won’t be seen until the Buckeyes open non-conference play, which leaves little space for error as Duke, Kentucky and Xavier highlight a strong opening stanza to the season. Whether he’s prepared for it or not, Washington’s spot on the team is now Russell’s in all ways, which seemed to be the pitch for him from the Buckeyes.

“Our relationship is great, it’s all good,” Russell said of Ohio State to 247Sports writer Dushawn London. “On our zoom, we talked about how I would fit into their system and how they see me helping the team. We went over the pieces they lost and how I could potentially step into that role and how we can both benefit from the decision, so it went well. We actually had two zooms that went well. They’re a nice staff.

“It’s no secret that they lost their top scorer so me averaging 18 a game last year, I would come in to score the ball, play the combo, be in different pick and roll situations, and help with scoring.”

So, with Russell filling in for Washington, where does that leave the Ohio State rotation? Well, it’s very fluid, but it’s quite a bit more filled out than it was prior to Russell’s pledge.

Meechie Johnson and Jimmy Sotos will both see time here, but Wheeler’s defense and ability as a distributor makes sense in a starting lineup with capable scorers in the other four spots.

Though Sotos is a decent shooter and ballhandler, the 2020 sample size for him is so small, and he has just one season left in Columbus. Ohio State rolls with the future PG1 here and gets him plenty of time so that he can take over the top spot in 2022.

Great shooter, great scorer. His defense leaves something to desire and he’s not going to do much for ball movement, but somebody has to be a go-to scorer, and he ‘s very comfortable in that role. Even if he’s not quite Washington, Ohio State gets its backcourt scoring threat.

There’s a case for Justin Ahrens here, leading to a smaller second unit, but he seems to be a better fit as the No. 2 small forward, and Branham is just too good to sit on the bench this season. He provides scoring off the bench and gets plenty of time with Johnson, who should be his long-term backcourt partner.

Ohio State will need a more aggressive version of Sueing in 2021, but he has the ability and the physicality to be a strong wing in the Big Ten, and flashed that ability last season. He can help out against strong scoring guards too, which Ohio State may need because Russell won’t be much help on that front.

Ahrens isn’t consistent or well-rounded enough to start, as he did for much of the 2020 season, but his scoring off of the bench is valuable, and it’s hard to imagine a rotation without him. The backcourt defense in this second unit is… troubling, so there may be a case for rolling with a three-guard lineup of Johnson-Branham-Eugene Brown instead of Ahrens, but honestly, this is where the Musa Jallow departure hurts Ohio State. His defense and size would have been very valuable here, especially with two competent scorers already in the second unit backcourt.

Very little explanation needed here. He and Kyle Young are essentially interchangeable in position, but Liddell should be a bit less worn down if he’s guarding forwards instead of centers in conference play – a burden Young can take.

Maybe the hardest call in the entire rotation. I think there’s a very, very good case for Zed Key here, but Towns has to be in the lineup somehow. Maybe he moves up to the backup SF spot with Key at the PF, but the spacing becomes troubling there, especially if we’re assuming that Joey Brunk is the backup center. Two bigs that don’t shoot three-pointers is too many in the modern game. A healthy Towns battles for starting time, but would be an outstanding piece on the second unit. An unhealthy Towns plays because there’s not much else to do here.

Again, pretty self-explanatory. Young is an outstanding frontcourt distributor to help Wheeler and will be the best glue guy in the conference once again. He’s far more valuable than Buckeye fans realize.

Key may have a case here too, but the complaint about a lack of size seems to have gotten through to the Buckeye staff, because Brunk is 6-11, and that’s just about his entire game. He’s a servicable big off the bench that should help neutralize opposing 7-footers while giving Young a breather. Whether he affects the spacing too much to play him significant minutes is a big question, though.

There’s a time and a place for both players, though Brown more than Sotos, who seems essentially redundant if Johnson takes a step forward. Brown’s defense is valuable, though, and he will see time against teams with strong backcourt scoring attacks. Key’s touch inside is valuable as a supplement to Liddell, too, though he seems more like the future replacement for Liddell than a consistent contributor this season.