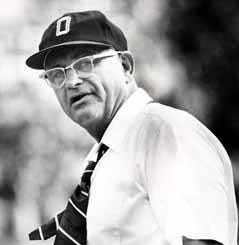 Ohio State historian Jack Park has had experiences with a handful of the Buckeyes former head football coaches, and that includes the legendary Woody Hayes.

After 28 seasons and 238 wins as Ohio State’s head coach, Hayes finished his tenure with five national titles and 13 Big Ten championships. Park said many of those came after Hayes had a shift in mindset, specifically on the recruiting side of things.

Park discussed that, as well as much more about Hayes, in Buckeye Sports Bulletin’s annual Interview Issue. Here is an excerpt:

“I had five different contacts or interviews with him, and we became acquaintances. I wouldn’t say we became friends. We didn’t have that much of a contact together; we were acquaintances. If I might see Woody at a dinner later on, maybe shortly before he passed away, I think he would recognize me and he’d say, ‘Hey, how you doing?’ I’m not sure he could even come up with my name.

“Looking back at all the years I’ve studied Hayes and everything, Hayes basically was a great American. He loved this country of ours more than almost anybody ever. He served in the Pacific during World War II. He really, really honored General George Patton. That was his hero. He studied military history like you wouldn’t believe. He could teach a military history course probably better than most history teachers. And he particularly was very fond of explaining to people how America broke the Japanese code and won the Battle of Midway Island.

“He would always say that had we not broken the Japanese code and had the Japanese won the Battle of Midway, they would have been moving east and we probably would have had fighting on United States soil before World War II was over, and we may have lost the war. He was very, very knowledgeable. He could take you from Midway Island down through Iwo Jima and to, basically, winning the war and then the Pacific and everything like that, and he loved to talk about that. He would rather talk about that than he would about football.

“Football wise, he was, in my opinion, and I know a lot of people would not agree with this, and you can certainly quote me on this – his positive impact on the Ohio State University, in my opinion, is greater than any other person ever. It’s greater than William Oxley Thompson, who was such a great president. Gordon Gee was a tremendous president. But I think the man that had the greatest impact on Ohio State was Woody Hayes, and he was a football coach. But you talk to his players today, a lot of them didn’t like him when he coached. He really drove them. He really brought the best out of them.

“He had a 76.1 winning percentage in 28 years. He won 13 Big Ten titles and has all the Heisman Trophy winners in Hopalong Cassady and obviously the two-time winner in Griffin and all that. But his impact on these players – where they went out and then they did better things as teachers and as lawyers – to me, Hayes has the greatest impact ever of any one person on the great Ohio State University.”