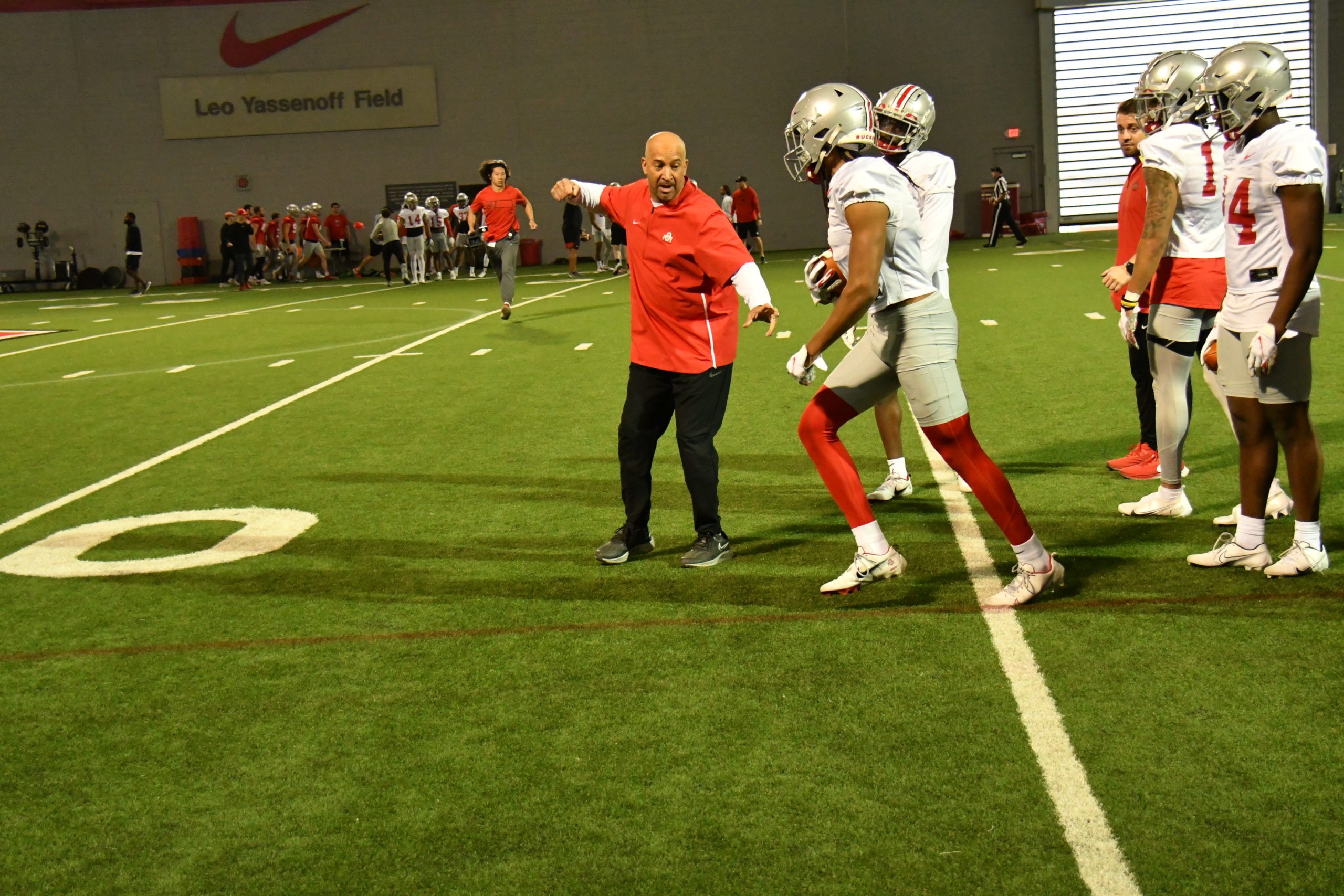 Ohio State again opened the doors of the Woody Hayes Athletic Center to local media for the first three periods of spring practice on March 29. As usual, the Buckeyes did not reveal the ultimate secrets of their team, but BSB did pull some observations on both sides of the ball, organized by position. Here are our looks at the defense.

It seemed to be a technical day in Columbus because all four defensive units were working on foundational concepts. The defensive line opened with a four-man drill designed around being blockers to gaps, ran through an agility course and then worked some double- and single-team techniques. There wasn’t so much of a discernable order in these drills, though the agility drill did yield at least a slight list, as did the breakout work when the tackles – who worked on double-teams – and the ends – working against one blocker – split off

In individual work, the tackle pairings were Cage and Vincent, Williams and Hall and McKenzie and Hamilton. Across the field, the ends worked with Harrison up first, followed by Jean-Baptiste, Sawyer, Noah Potter, Tuimoloau and Cowan. Cowan had been listed as unavailable in early practices but seemed to be full-go here. Ohio State has high expectations for this group but still seems to be in the determining-what-it-has stage of camp.

“We’ve always felt like we’ve been able to recruit really good defensive linemen here and Larry (Johnson) has done such a great job of that,” head coach Ryan Day said. “We want to start with four down linemen. In 2019 I thought we did a really good job of going through and putting the one-high safety defense together, and that year was excellent. Then over the last couple of years, we’ve had some issues here and there, but when it came to making this decision moving forward, we still wanted to start with that foundation, but at the end of the day, the goal is to put our guys in position to be successful.

“Finding a way to do that is the key to college coaching. I think it’ll look similar to what it did at Oklahoma State (under defensive coordinator Jim Knowles) – that will be up to the defensive staff to determine – but there will be some other things too that guys on our team do well, and the key is trying to figure out how to maximize those skill sets. That’s starting now, but I know that journey is going to take a lot of twists and turns.”

Speaking of Knowles, it was a fitting morning session for the cerebral former Oklahoma State defensive coordinator, now running the show and directing the linebackers in Columbus. The linebackers were working on their tackling technique with a big, rolling foam donut that they needed to take to the ground while keeping their heads out of the hole in the middle. Knowles has talked extensively about his commitment to rugby-style tackling, and rugby-style dictates shoulder tackling with the head out of the way, rather than the traditional “head across the bow” form that was taught for many years before Pete Carroll helped to popularize this new approach. Knowles has said that Ohio State will not be tackling to the ground in practice, and this serves as a way to simulate that without sacrificing bodies.

“The bottom line is that you don’t have to practice bringing guys to the ground, it’s all about positioning,” Knowles said in early March. “Tackling is technique and timing. What I’m looking for out there is what I call ‘owning your hip.’ You can do this all year long, you don’t need pads on, you just need to own your hip.

Knowles, seated at a table behind a microphone on a short stand, rose to provide an example.

“If this microphone is the runner, I have to have one guy at its side, in a good position, and he has to tag the hip (wrap up around the hip). And then I need another guy in front of him, with his near leg up (correct form shoulder tackling includes leading with the leg that corresponds with the lead shoulder), and he’s got to tag the hip. You can do that all over the field, you don’t ever really have to tackle somebody in practice. It matters if you’re in the right position. (I) teach them that it’s okay to miss tackles if you’re in the right position.”

Knowles doesn’t seem much for ordering players in any specific way, so there’s no real group to work off of here. Steele Chambers is usually among the first to go, as is Tommy Eichenberg, with Reid Carrico not far behind. Cody Simon is, as he was at the last practice, in full pads but seemingly not a full participant. The only absence of note is that of Cade Stover, who was working instead with the tight ends this morning.

No one was more excited about technical day than cornerbacks coach Tim Walton, who worked exclusively with the cornerbacks in the periods that we saw, while Perry Eliano stayed with the safeties. The two have flipped responsibilities in the past, but it seems that the minutiae in each position will fall to the true coach.

Walton spent time on man coverage skills with a one-on-one drill, jumped to an off-coverage look that seemed to be focusing on picking up zone assignments and pointing out the uncovered man to another zone defender, and then contesting a wide receiver release at the line of scrimmage. Again, there was no obvious order here, but Walton seemed to be having the time of his life training up his group.

Eliano, meanwhile, worked with his safeties on backpedaling and then attacking the ball, before jumping into a tackling drill of his own. There was order here, in pairs of two: Ronnie Hickman and Kourt Williams, Bryson Shaw and Tanner McAlister, Marcus Hooker and Cameron Martinez, Josh Proctor and Andre Turrentine, and Kye Stokes with walk-on Andrew Moore. The surprise is Proctor, who has been out of spring practice thus far but seemed to be moving comfortably this morning. Ohio State had been working on ways to keep him engaged without being able to put him on the field.

“It’s my job to make sure that Josh Proctor still learns, Perry’s job to keep him engaged mentally, and it’s all of our jobs to encourage him to stay involved but when it comes to on the field coaching, there’s not much he can do,” Knowles said. “He needs to take a lot of mental reps and we have to just give him encouragement. I remember him from high school and from what I’ve seen on film, he is a guy who can really have a positive effect on the field for our defense.”