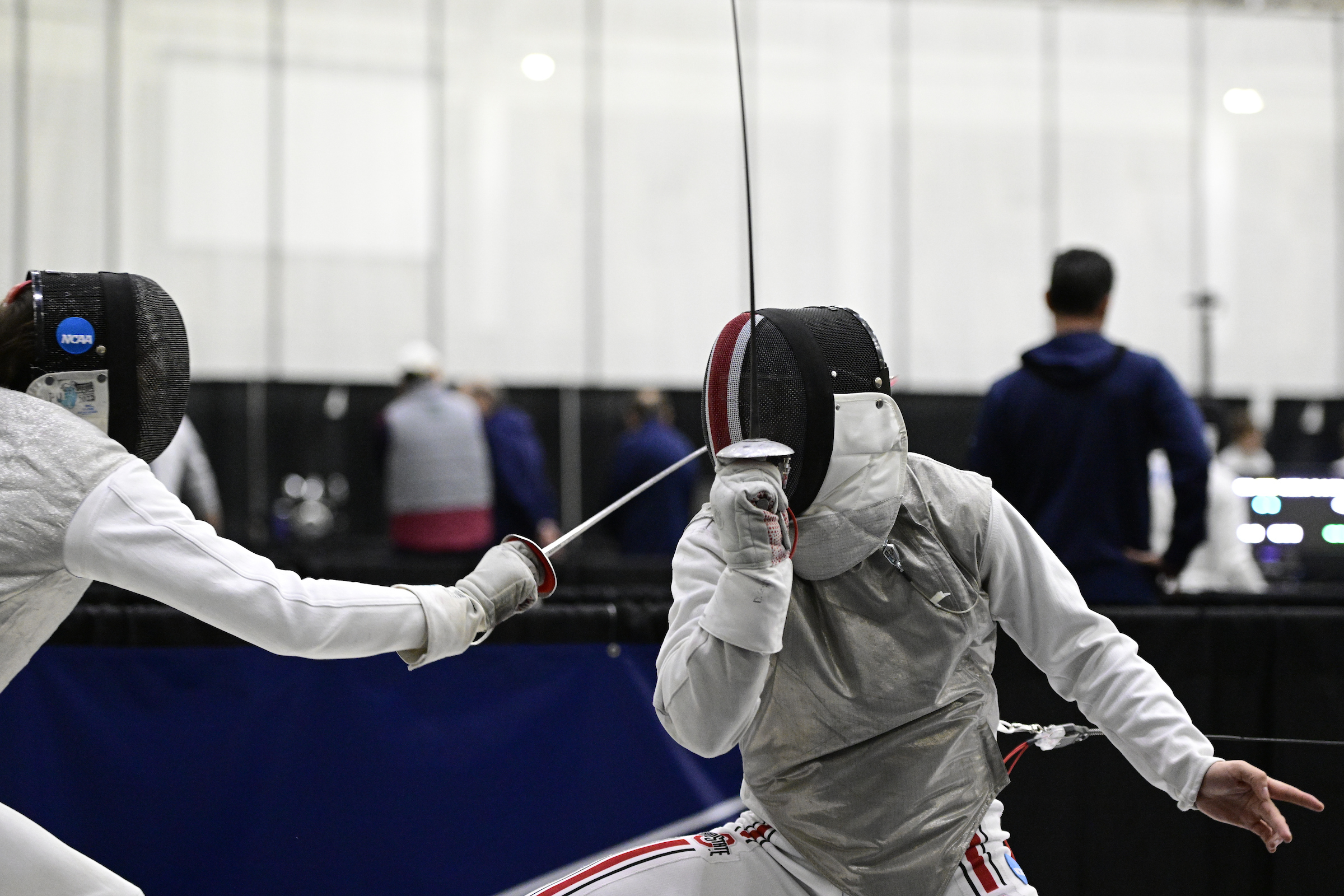 Feinberg was the fifth men’s epee champion in Ohio State history and the third straight winner when a team member competed at the national site. Marc-Antoine Blais-Belanger, a 2020 Tokyo Olympian, won the event in 2018 and Oliver Schindler was the 2019 victor.

The Lincoln, Mass., native entered the tournament as the No. 4 seed with a 15-8 record and plus-23 indicator in round-robin action. He defeated No. 1-seeded Ian Sanders of New York University, 15-14, before facing No. 2-seeded Nicholas Lawson of Princeton in the championship duel. After the first break, Feinberg and Lawson were tied at six, but the Ohio State fencer had four of the first five points to start the next session and claimed a 15-11 win.

Women’s foil led the Ohio State squad with 30 wins, while men’s epee contributed 28, women’s epee collected 26 and women’s saber had 23. The men’s foil finished with 19 wins and the men’s saber had 18. The Buckeyes have finished in the top six of the national tournament in every season they’ve competed since 2002.

“I am so proud of the resilience of this family because it really is a family,” Vargo-Brown said. “The love and the care that these student-athletes feel for each other and for Ohio State is something that I have never felt before. This team has been very special all year. I think the couple years of roughness really pulled us together in a very exciting way.”

Ohio State started the final day of competition with a trio win from Emily Armstrong, Cassie Neeley and Ruby Remati. Their routine earned a score of 83.7667 from the judges and cleared Stanford’s performance by a third of a point.

Laila Huric and Nikki Dzurko brought their duo routine to the pool for the first time in two seasons after Dzurko spent last season with the United States national team. The pairing looked dominant in an 85.2000-point swim to claim first place. Armstrong and Remati were Ohio State’s second duo performers and took second with 84.1667 points.

In the solo routine, Dzurko won her second career national title with a score of 85.3333. She also won the event as a freshman in 2019 — the last time Ohio State stood on top of the championship podium.

The Buckeyes brought out the brooms in the team category when the Scarlet Team won first place. Armstrong, Dzurko, Hannah Heffernan, Huric, Rachel Jager, Neeley and Remati brought in a score of 85.2667 to win the category.

At the event’s award ceremony, the judges compiled scores revealed the Buckeyes scored 102.0 team points across the three days of competition. Stanford finished second with 86.0 points and Incarnate Word took third with 72.0.

Armstrong also received hardware in the post-competition festivities, winning the Individual High Point Award for her three-gold medal and silver-medal swims at the U.S. Collegiate Championships.

Ohio State swimming and diving does not have champions yet. Still, the program could bring several title-winners back to Columbus after this weekend at the McAuley Aquatic Center in Atlanta, Ga.

The No. 9 Buckeyes will send 13 student-athletes to the 2022 NCAA Swimming and Diving Championships from March 23-26. Overall, a total of 270 participants — 235 swimmers and 35 divers — will compete for national titles in multiple events. Ohio State enters the meet after earning seventh place in last year’s competition, a program-best in the previous decades.

Ohio State has eight swimmers and five divers that will wear scarlet and gray at the NCAA Championships, including eight All-Americans from last season’s national meet. Clay Chaplin, Chachi Gustafson, Alex Quach and Hunter Grannum will make their debut, while Fabio Dalu will swim in his first Division I championship after winning titles at the Division II championships in 2021.

Hunter Armstrong, a 2020 Tokyo Olympian, and Quach will lead the contingent of swimmers in individual races with three each. Armstrong will swim in the 50m and 100m freestyle and the 100m backstroke, while Quach will compete in the 100m and 200m fly and the 200m IM.

Ohio State has won 11 team titles in program history with its first NCAA Championship coming in 1943. The Buckeyes have 119 combined event titles with 60 from swimming and 59 from diving.