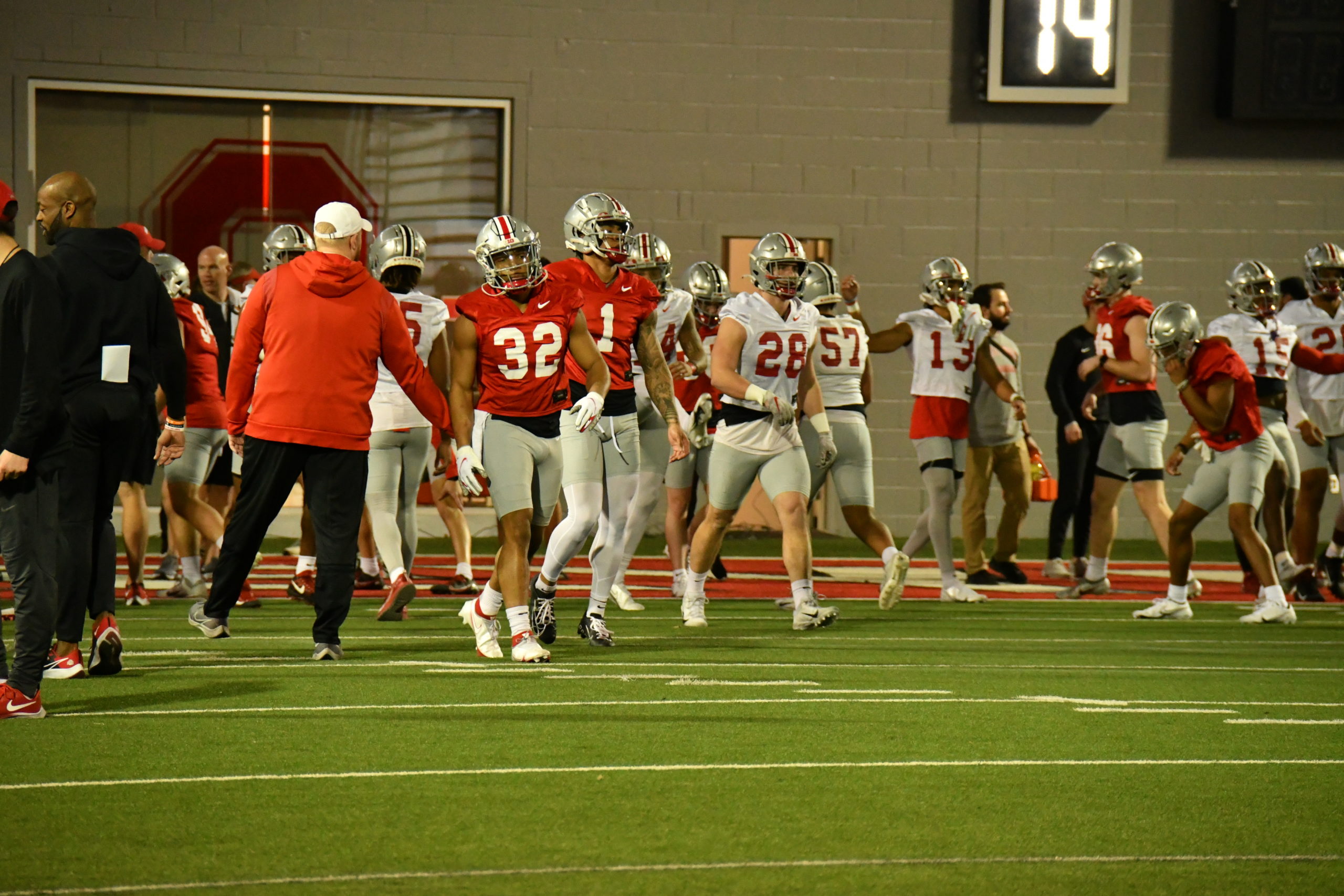 Ohio State held its sixth practice of the spring on Tuesday, and the media was present to document any happenings with the team heading into the fourth week of spring practice.

All was quiet on the quarterback front, with scholarship signal-callers C.J. Stroud, Kyle McCord and Devin Brown – as well as walk-on Chad Ray – all accounted for. They did little in the viewing period other than delivering handoffs, but everyone appeared good to go.

“I think it’s pretty good, this is a good group, a good room,” Day said of the quarterbacks. “Devin is just getting his feet wet right now, he’s learning. Every time he’s out there it’s for the first time. Kyle has really been working hard, the good thing is he’s got a year under his belt so he’s a little more veteran in that area, and then certainly C.J. has a lot more game experience, so you have three guys with very different experience.

The four usual suspects were present with TreVeyon Henderson, Miyan Williams, Evan Pryor and Cayden Saunders all working on Tuesday. There was one addition to this group, however, with walk-on Xavier Johnson taking handoffs in some of the sessions.

Johnson likely figures to be a depth play, as he is listed as a wide receiver but has practiced at both positions in the past.

“Miyan’s always done pretty consistently, Evan Pryor’s coming along, and there’s going to be some good competition there too, which I think you always need more than one,” offensive coordinator Kevin Wilson said earlier in the spring. “I think with the volume of plays that we play at receiver, tight end and running back, you need to be two, pushing three deep to get through the season, to get through key games. And not to milk out a game because you beat someone bad, but also (if) it’s a critical game and you need a second or third guy that can play championship football.”

Kamryn Babb and Julian Fleming were going full steam in Tuesday’s practice, indicating that the wide receivers room for Brian Hartline is both healthy and deep entering the fourth week of spring practice.

It’s a big spring for the likes of Babb, Ballard and Fleming, who appear primed for big seasons behind second-year quarterback Stroud.

“Right now he’s full go, and I can talk for hours about Kamryn Babb and what he’s done,” Day said earlier this spring. “Being a captain and everything he’s been through. We’re Kam Babb fans around here. Everybody loves Kam Babb, and he had a really good practice today. We’ll just keep pushing forward, and if he can stay healthy, he’s gonna have an impact on this offense for sure.”

The biggest development from Tuesday’s practice was Cade Stover’s evident move back to tight end. He had spent the first several practices in the spring working with the linebackers, but he was with the offense this last time around, returning to the position he had played the last two seasons.

The coaching staff has been hesitant to name an official position for Stover, so this could simply be another step in the process of him determining where he wants to play at.

“He may come over to tight end and do a little bit of work there as we go,” head coach Ryan Day said earlier this spring. “I think he’s he’s trying to figure that out still which side he wants to play. I think he is wired to play defense and if you asked him what he’d like to do he would say defense, but he also wants to have a major impact on the team. If it’s on defense, great. I’ve always felt like you want to allow the opportunity for guys to choose where they want to play, because that’s when they will put their whole heart into something. Steele Chambers made that move and that was his decision. I think (Cade) could be a tremendous tight end. I think he really put a lot of work in over the last year, but it will be up to him for what he feels most comfortable doing going forward.

“I won’t put a deadline (on his decision). He played all of last year at tight end and then at the Rose Bowl he played linebacker. He’s very, very talented. He had an unbelievable offseason. Cade was an Iron Buckeye for us in the Champions meeting yesterday. One way or another, he will have an impact on this team.”

Stover led the group in drills, followed by Joe Royer and Sam Hart. The second group was made up by Bennett Christian and Zak Herbstreit.

Little was evident from the offensive line in terms of starters with them working off to the side, but several presumed starters – Paris Johnson Jr., Matthew Jones, Donovan Jackson and Dawand Jones – were all present. Though this reporter’s eyes did not personally catch Luke Wypler, his absence has not been reported elsewhere.