Poor Shooting, Turnovers Cause Buckeyes To Fall To Illini 63-56 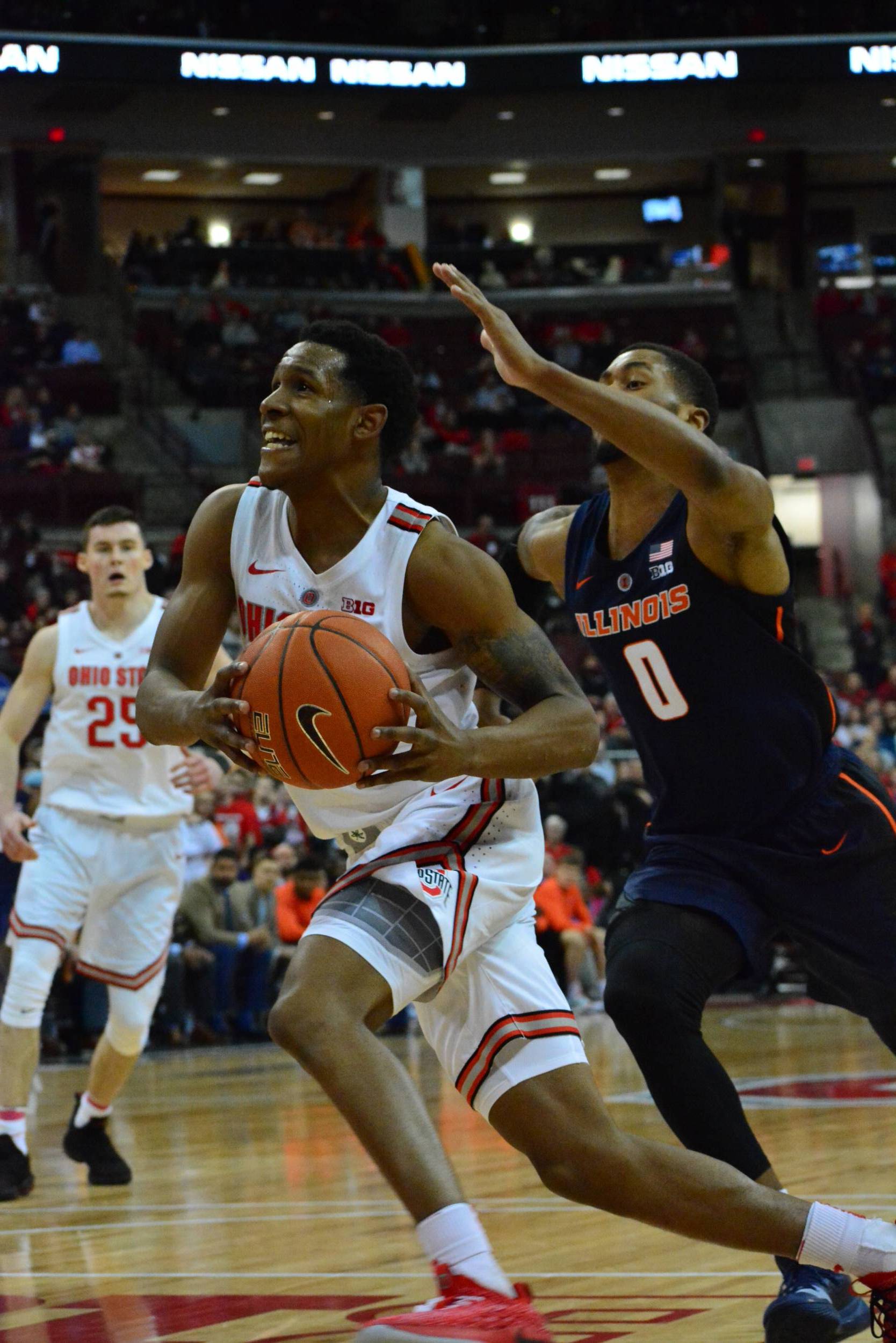 The Ohio State men’s basketball team’s three-game winning streak was snapped at the hands of Illinois, 63-56, at the Schottenstein Center.

“It’s a tough conference,” said junior forward Andre Wesson. “Every night you can get beat if you don’t show up, and we came out tonight and weren’t prepared. And that’s on me and us older guys, we need to get the younger guys prepared. And that’s what happens, that’s how you get beat.”

Senior guard C.J. Jackson led the Buckeyes in scoring with 17 points, shooting 4 of 9 from the field, 1 of 1 from distance and 8 of 11 at the charity stripe, but committed a game-high seven turnovers.

“He got himself into some difficult decisions with the ball, and seven turnovers is a lot,” Ohio State head coach Chris Holtmann said of Jackson. “I don’t question how hard he competed. I think he competed, it’s just — those turnovers were critical.”

The Buckeyes (16-8, 6-7 Big Ten) appeared to be off to an excellent start when freshman guard Luther Muhammad weaved through the Fighting Illini defense and found Jackson in the corner, who used a pump fake to free himself for a three-pointer, extending Ohio State’s lead to 7-3.

The home team cooled off quickly and Illinois (10-15, 6-8 Big Ten) scored six unanswered to steal a 9-7 lead. After more than eight minutes of back-and-forth basketball, the visitors went on a 7-0 run and pushed their lead to 27-18 with 4:21 until halftime.

Ohio State responded with a 9-3 run to close the half, trailing 30-27 at intermission. Jackson hit 4-of-7 foul shots, freshman guard Duane Washington nailed a turnaround jumper and Kaleb Wesson splashed in a three-pointer, while Illinois knocked down 3-of-4 free throws during the run.

After Jackson made it 32-31 with a pair of free throws, Illinois ignited a quick 8-2 run. Freshman forward Giorgi Bezhanishvili completed an and-1 and hit a jump hook, and sophomore guard Trent Frazier added another three-pointer, while Jackson made a Buckeye layup.

The Buckeyes evaporated the Illini lead with a rebound putback by Kaleb Wesson, a short jumper from sophomore forward Kyle Young and an and-1 by Jackson, igniting the home crowd and tying the game at 40 with 13:02 remaining.

Then, Washington stole the show, throwing down a pair of dunks in transition with the second slam resulting in an old-fashioned, three-point play.

The freshman’s five-straight points gave Ohio State a 45-44 lead, but the visitors regained advantage on a pair of free throws by Dosunmu and a Bezhanishvili jumper.

Dosunmu drilled a three-pointer in between a free throw and a jumper from fifth-year senior Keyshawn Woods. Then, Frazier hit a jumper to push the Illini lead to 53-48. Kaleb Wesson knocked down a pair of foul shots before Bezhanishvili finished an easy layup.

After a sequence of free throws, the Buckeyes trailed 57-51 with 1:37 left when Jackson drove to the basket and converted an and-1 layup, then, hit the free throw to bring Ohio State within 3.

Feliz came through with a clutch layup for the illini before Muhammad hit a pair of foul shots to shrink the lead back to 3. Needing a stop to stay alive, Ohio State surrendered a back-breaking three-pointer to Dosunmu, ending its chances.

Illinois made 24-of-54 shots and 6-of-21 three-point attempts, while only shooting 9 of 17 at the foul line. The Illini committed 13 turnovers, while the Buckeyes coughed the ball up 18 times.

“I just think they made a few more plays, but give them credit,” Holtmann said. “I think we obviously have to play better.”

The Buckeyes will look to bounce back at Michigan State Sunday, Feb. 17 at 1 p.m.