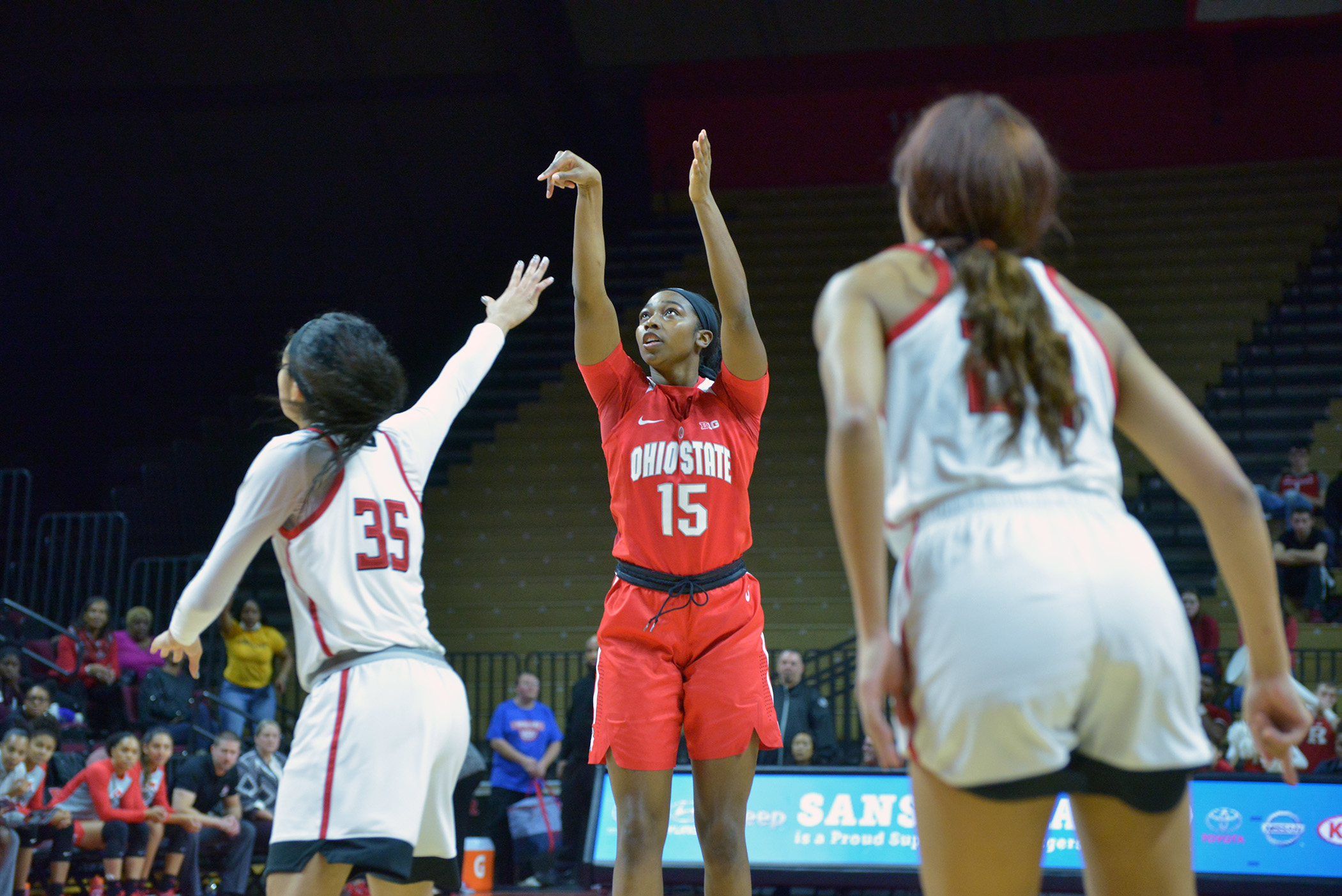 After its 78-52 loss Sunday against then-No. 16 Iowa, the Ohio State women’s basketball team bounced back Thursday at Rutgers.

From the road confines of the RAC in Piscataway, N.J., the Buckeyes started strong as they ran away with their 59-39 win over the No. 23 Scarlet Knights.

Without fifth-year senior forward Makayla Waterman (knee), who did not make the trip and missed her first game on the season after she started all 22 of OSU’s previous contests, freshman forward Aaliyah Patty got the nod in the lineup and stepped up with six points and six rebounds.

“She played great,” head coach Kevin McGuff told IMG Sports Network of Miller, who shot 5 of 7 and drilled three treys in a homecoming of sorts from nearby Somerset, N.J., after the game. “Especially with (Waterman) out, we needed somebody like that to step up and Adreana was fantastic.”

“I thought we really played aggressively,” McGuff said. “And I thought we handled — they tried to speed us up with press for a second there, we got sped up a little bit and got a little sloppy. But for the most part, we did a good job handling our pressure and then, at the end of it, making good decisions, when to attack and when to run offense. And when we did run offense, we had good spacing and we played aggressively and it resulted in good shots.”

The real story, though, was the Buckeyes’ defense. OSU kept the Knights to 26.2 percent (16 of 61) across the floor and 9.5 percent (2 of 21) from long range, holding former Ohio State guard and Rutgers graduate transfer Sierra Calhoun scoreless on 0-for-6 shooting, among other stout efforts.

“We played a lot of zone, but we got out and extended and played pretty (well) with a lot of aggression,” McGuff said. “We tipped a lot of balls and we kind of took them out of their rhythm. They didn’t really get much of an offensive rhythm.”

OSU started the second quarter with four straight points from Patty, whose layup 57 seconds in and jumper 1:03 later extended the trend from the opening period to 21-1 and grew the lead to 27-6.

“We hit some shots, but I thought our defense was really stout through that,” McGuff said.

Rutgers stopped the drought on a layup from Victoria Harris at the 6:25 point, but Grande’s three pointer 30 seconds later put Ohio State in front of a 30-8 advantage.

Harris sank consecutive layups that fueled the Knights’ 10-5 edge over the final 5:08 and trimmed the Buckeyes’ lead to 35-18 at halftime. A layup with four seconds left from freshman forward Dorka Juhasz, who dropped nine points and grabbed a game-high 12 rebounds, followed Miller’s layup at the 1:28 mark and allowed OSU to carry some momentum into the second half.

Rutgers cut Ohio State’s lead to 35-20 on Tekia Mack’s layup at the 8:11 point of the third quarter before Crooms answered with a layup at the 7:04 mark. The Buckeyes’ lead fluctuated as the Knights closed the remaining 6:28 in front of a 6-5 edge that kept the visitors up 42-26 into the final 10 minutes.

OSU kept pace throughout the fourth quarter, going back and forth with Rutgers but keeping firm command of its double-digit grip. The Knights cut the deficit to 15 points twice, the last of which came at 47-32 with 6:11 left — before Ohio State pulled away down the stretch. Miller’s make from long range with 5:43 to go created some separation at 50-32 and Crooms’ pair of free throws put the Buckeyes back up by 20 points, 52-32, 18 seconds later. A back-and-forth finished in the final five minutes ensued, 7-7,  en route to OSU’s 59-39 victory.

Nine points apiece from Arella Guirantes and Stasha Carey led Rutgers, which suffered its third straight loss by double digits after the Knights fell Feb. 3 at Minnesota (60-46) and Feb. 10 against then-No. 10 Maryland (62-48) to start the month.

“We played really hard defensively, obviously, so kids really locked in and were focused,” McGuff said. “That’s a hard team to beat like that, too. They’ve had a great season to this point and so really proud of our effort tonight and great win for us.”

Ohio State looks for another win Sunday at Value City Arena in Columbus, where its return to action hosts Wisconsin (11-13, 2-10) for a 2 p.m. start on BTN Plus.