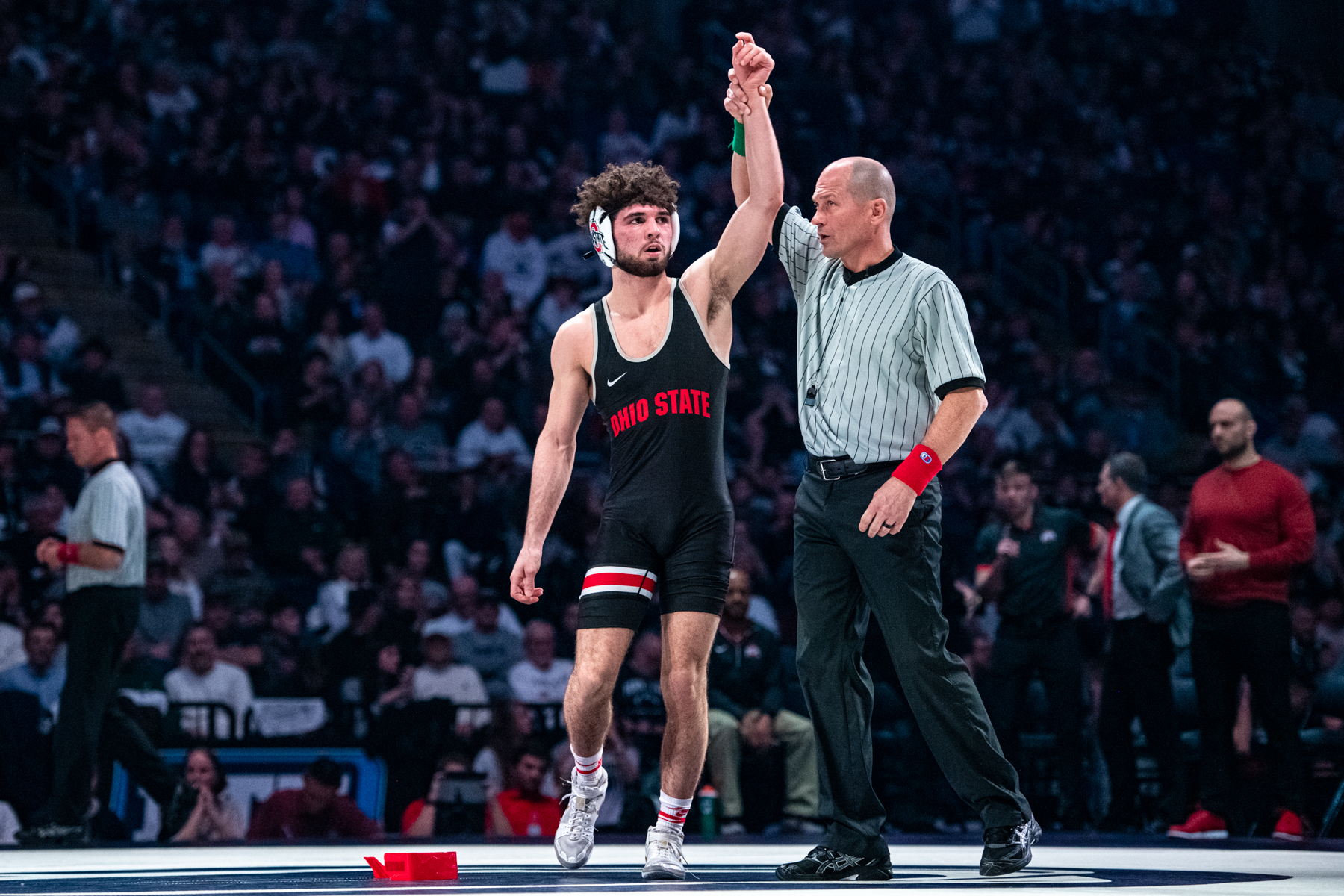 Ohio State saw yet another major sport open this past week, with the baseball team kicking off its 2020 season with a three-game weekend. Elsewhere, the wrestling team squared off with a rival, the track teams showed out in South Carolina, and the men’s tennis team continued its dominant form and continue to establish itself as one of the nation’s best.

Ohio State closed its regular season with a 20-16 defeat at the hands of No. 2 rival Penn State, the latest chapter in a decade long competition for the crown between the two programs.

It was a frustrating result for Ohio State, which received stellar results from question positions at 125 pounds (Malik Heinselman (OSU) def. Brandon Meredith (PSU) | D, 5-3); 157 pounds (Quinn Kinner (OSU) def. Brady Berge (PSU) | D, 4-3); and heavyweight (No. 23 Gary Traub (OSU) def. No. 13 Seth Nevills (PSU) | D, 5-4) but saw its typically reliable stars falter. Sammy Sasso and Kollin Moore both claimed wins but were able to generate just one bonus point between them, while the third No. 1, Luke Pletcher, fell for the first time all season to No. 2 Nick Lee, 8-4.

The decisive bouts came at 165, 174 and 184, where Ohio State sustained three brutal blows. Ethan Smith was beaten soundly by Vincenzo Joseph 13-5, Rocky Jordan met a similar fate against Aaron Brooks 15-4, and Kaleb Romero suffered a pin in just 46 seconds to No. 2 Mark Hall.

Ohio State will take a short break now, as it prepares for the Big Ten Championships on March 7-8.

No. 24 Ohio State opened its season with a 7-3 loss to Saint Joseph’s on Feb. 14, but bounced back with two wins to claim a successful opening weekend. It was a brutal defensive outing for the Buckeyes, who surrendered a three-run home run in the fourth inning despite two outs on the board that opened the game up.

“It was a disappointing opening day,” Ohio State head coach Greg Beals said. “We were fired up but just didn’t play good Ohio State baseball the way we’re capable of. We might have been a little too ramped up but their starting pitcher threw the ball really well. They competed well, got a couple big hits and we didn’t. We got beat today. The outpitched us, outhit us and our defense didn’t really up us as well.”

Against Pitt the next day, Ohio State bounced back with a 4-1 victory on the back of a 12-strikeout performance from star pitcher Seth Lonsway.

“It started on the mound,” Beals said of the wain. “Our pitchers were terrific, striking out 18 batters. Seth really settled in and Bayden (Root) was lights out on the back end. We were solid on the mound but I also was really happy with how hard we hit the ball. Our offense was productive but we need to do better in some situations. We’re looking forward to coming out tomorrow to try to win the weekend.”

The final win came on a base-clearing double in the 10th inning from Conner Pohl to secure a 10-6 extra-innings win over Indiana State.

“We were sloppy defensively to say the least,” Beals said. “I thought our pitchers really battled. I still believe that our infield defense is going to be a major strength of our team but we didn’t play that way this weekend. We’re going to pitch the ball effectively and we need to support that pitching staff. We had a really good game last night and we dealt with some tough situations today but we fought and competed. Today wasn’t pretty. We put ourselves in some bad spots but we fought our way through them.”

Ohio State will take the diamond next on Feb. 21 for the first of a three game road series against Georgia Tech.

Ohio State continued its elite run of form with a 4-1 win over Wisconsin in round one of the ITA Indoor Championships.

It took some extra effort in the quarterfinals, but the Buckeyes stayed unperturbed against No. 6 Wake Forest, holding on for a 4-3 win to advance in the tournament. The Buckeyes took the doubles point, but the Demon Deacons were quick to respond, and held the match close until James Trotter sealed the win for the Buckeyes with a win over Eduardo Nava, 7-6 (7-4), 4-6, 7-5.

In the semifinals, however, Ohio State’s run came to an end. The No. 5 Tar Heels secured the doubles point, and Ohio State found no answers in singles to erase the deficit, falling 4-0. Ohio State will return to the courts on Feb. 22 against Notre Dame.

The Buckeyes put up four strong efforts dropped all four games over the weekend, falling to 3-5 on the season. Game one saw a tight, 5-3 loss to NC State despite a good offensive effort from Avery Clark.

A day later, the Buckeyes fell to Notre Dame, 7-1 and NC State, 5-3. Pitching was a concern for Ohio State entering the year, and that concern has been realized early in the season.

The final game of the weekend was another loss to Notre Dame, 6-4. The loss marked the end of the Big Ten/ACC Challenge for the Buckeyes, who exit with an 0-4 showing on the year. Clark launched a home run in the second inning, but Ohio State had no answers for Notre Dame’s five-run first inning.

The Buckeyes will head to the Fresno State Invitational from Feb. 21-23.

No. 10 Ohio State was upset by No. 15 Vanderbilt on Feb. 16, 5-2. Irina Cantos Siemers was the lone winner in single for OSU defeating Marcella Cruz, 6-4, 6-2. The Buckeyes took the doubles point but were unable to overcome the poor showing individually.

They’ll continue their stretch against SEC foes on Feb. 21 against Kentucky.

Ohio State sent track and field athletes all over the country this weekend, with Sprinters and jumpers at Clemson, SC, middle distance and distance runners in the Iowa State Classic and throwers and pole vaulters in Kent, Ohio. Between the men’s and women’s teams, the Buckeyes secured 17 top-ten finishes.

Ohio State returned to its proper form over the weekend, toppling No. 2 Wisconsin 3-1 on Feb. 15 and drawing with the Badgers 1-1 a day later. For a road trip to Madison, the Buckeyes could not have hoped for much better of a result, as they will enter the final stretch sitting in prime position at 18-8-6 (11-6-5 WCHA) with a series against St. Cloud State serving as the season finale this upcoming weekend.

Tatum Skaggs, Sophie Jaques and Gabby Rosenthal all scored for the Buckeyes in game one, while Skaggs was the lone scorer in game two, notching her 100th point of her career. Netminder Andrea Braendli was brilliant, snagging 75 saves on 77 attempts on the weekend.

Ohio State suffered its first loss of the season and fell to 2-1 with a 9-7 loss to UMass on Feb. 15. The Minutemen, scored the game’s final five goals, while Ohio State remained scoreless over the final 17:32 of regulation.

‘Credit a tough UMass team,” said head coach Nick Myers. “We knew they would fight hard and they did. We will reflect and grow from this. Then we will turn the page and prepare to compete next Saturday vs. a good Bucknell team.”

The Buckeyes will take the field next against Bucknell on Feb. 22.

“We just have to keep doing what we do best and believing in ourselves,” Ohio State head coach Amy Bokker said. “We need to be prepared, recognize personal, be tougher, finish when we have the opportunity and get our defense organized. We had a decent game plan going in but I’m not sure our execution was where it needed to be. Kent State was a great opponent and they have talent on their team.”

Game two of the week saw quite the different showing, as Ohio State was rocked by Stony Brook on Feb. 15, 20-7.

“It was an awesome opportunity to get out and play a top team and we saw some bright moments,” Bokker said. “Freshman Caly O’Brien played really well and so did Chloe Johnson, she was going hard to the net for us. Riley Ewing also gave us a chance on every draw.”

Johnson and O’Brien both scored three goals in the loss. The Buckeyes take on Cincinnati next on Feb. 19.

Ohio State will face off next with Loyola Chicago on Feb. 21.

“I’m excited about the conference win,” Ohio State head coach Meredith Paulicivic said. “That’s really important as we head into the Big Five Meet and Big Ten’s. I’m a little frustrated because I feel like I’m still not seeing the gymnastics on the competition floor that I’m seeing in the gym every day and we’ve just got to continue striving to figure that out.

The Buckeyes will head to the Big Five Meet on Feb. 21 next.

The Buckeyes will return to action at the Big Ten Championships on Feb. 26.

It was a tough week for the golf teams. Opening the week, the women’s team put up a 15th place (+52) finish at the Northrup Grumman Invitational. Adeena Shears led the Buckeyes, finishing tied for 21st with a four-over par performance.

The men’s team, meanwhile, started off the Puerto Rico Classic with a 15th place finish on day one of 15 teams, finishing +15. The next closest team was seven-over on the day. The event will conclude over the next two days.