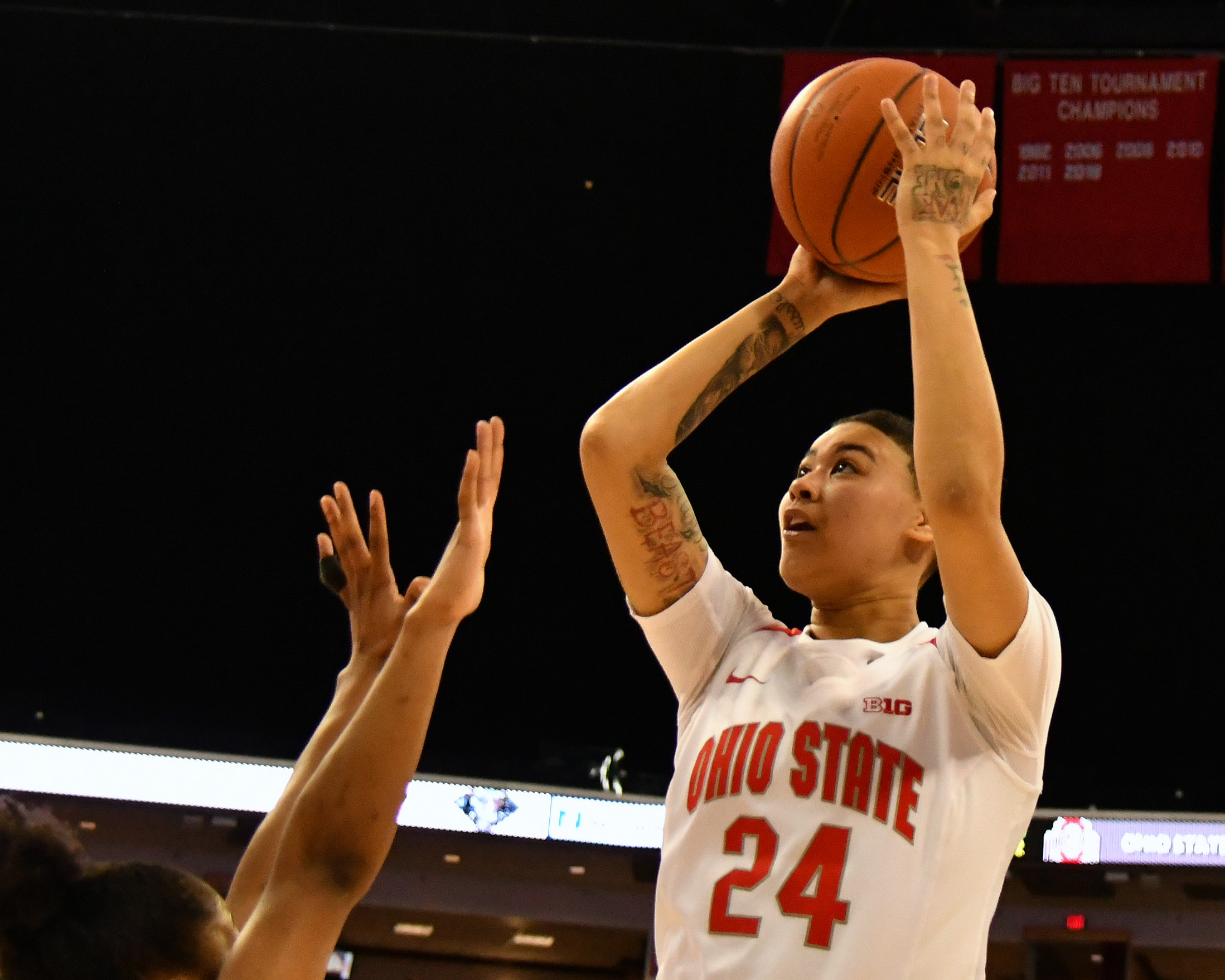 Hot shooting down the stretch was the key for Ohio State sealing a crucial 80-76 road win against No. 20 Indiana, giving the Buckeyes five straight victories, adding to what was already the longest winning streak of the season.

“It’s a really big win. We beat a great team today in a tough environment,” Ohio State head coach Kevin McGuff said. “Really proud of our kids, but this is certainly a big one.”

But it did not look good for the underdogs heading into the final quarter.

Both of Ohio State’s sophomore forwards — Dorka Juhasz and Aaliyah Patty — had four fouls after three quarters, and their foul troubles seemed to be a problem down the stretch for the Buckeyes.

Still, the Buckeyes trailed by just six, 55-49, after a late three by freshman guard Kierstan Bell to end the third quarter.

And the fourth quarter was when Ohio State went nuclear.

The two teams went back and forth for the beginning of the final frame until seven straight makes from the field by Ohio State gave the Buckeyes the lead by one, 67-66.

But on Indiana’s next possession, Juhasz fouled out, and the split free throws by Aleksa Gulbe tied the game.

Gulbe shot only three times in the game, but finished with 14 points after making nine of her 12 attempts from the charity stripe.

Ohio State would get to the free throw line itself on the next possession and go up two on a pair of makes by freshman guard Madison Greene.

Coming off a career-high 25 points and seven assists, Green again put on a terrific performance, ending with 22 points, and also doing most of her work from the line, hitting 10 of her 14 free-throw attempts.

“She and (Bell) and Jacy (Sheldon) and our freshmen, they’ve played in so many big minutes this year it’s like I don’t even look at them as freshmen anymore,” McGuff said.

Ohio State did not stop with seven straight makes. It also made its eighth, ninth and 10th straight attempts as a part of a 20-6 run that put the Buckeyes up 76-70 with 1:12 to go.

But the Hoosiers were not done yet. Indiana’s star guard, Ali Patberg, who was a problem all game for the Buckeyes with 22 points and six assists on 8-of-12 shooting, hit two crucial free throws to make it a two-point game, 76-74, with 38 seconds to go.

And once again, when Ohio State needed a big shot, it turned to Greene. The freshman guard delivered, icing the game with a difficult make with just seven seconds to go the 11th straight make for Ohio State from the field, and then a pair of free throws with a second to go to send the Buckeyes back home with a fifth straight victory.

Aside from Greene, another freshman guard in Jacy Sheldon played a big role in the win. She ended the day with 16 points on 7-of-10 shooting.

The Buckeyes are now 16-9 overall and 9-5 in the Big Ten, and are more solidly a team bound for the NCAA tournament than at any other point in the season.