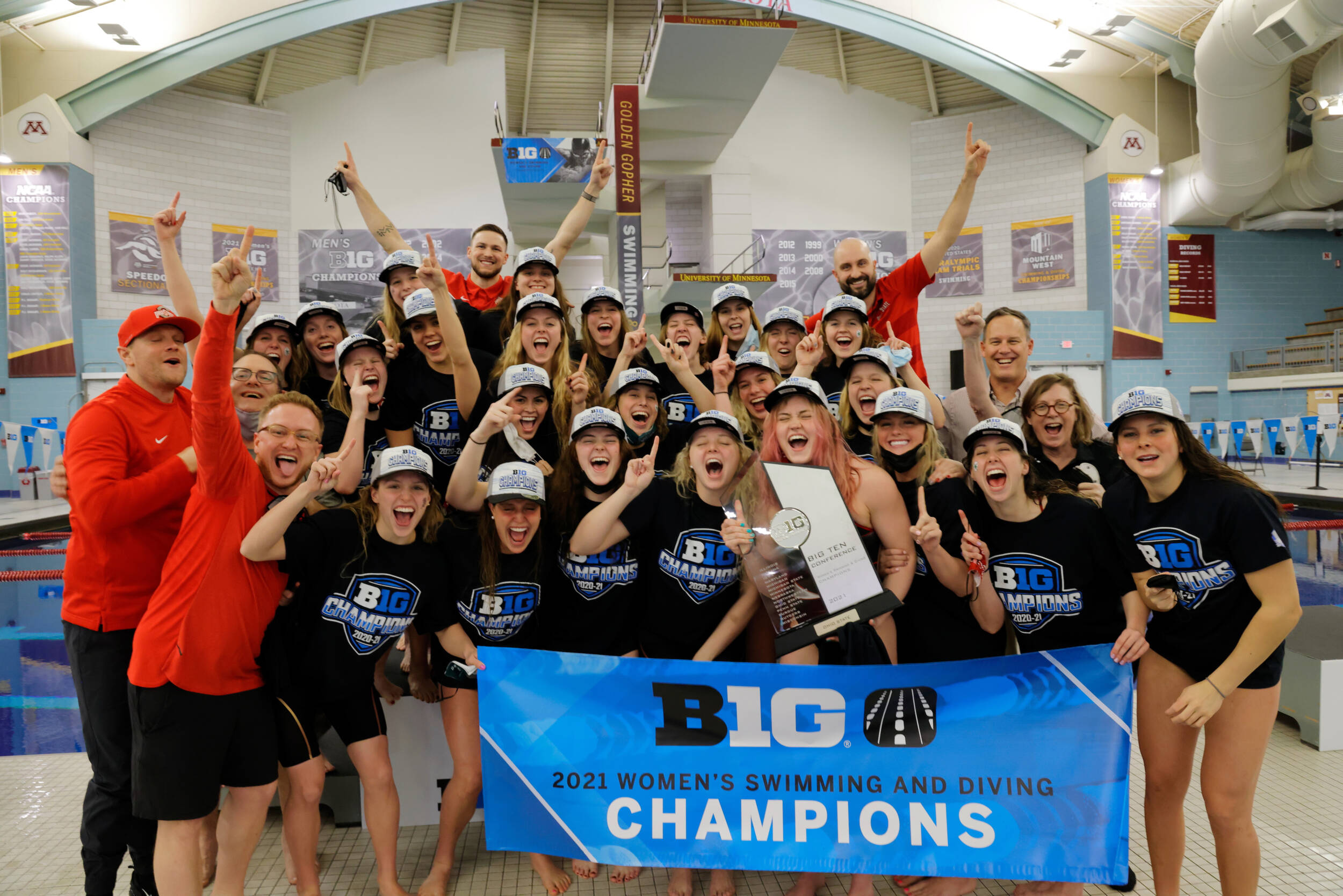 Ohio State’s women’s swim and dive team won its second-straight Big Ten Championship on Feb. 27 after a tremendous week at the Jean K. Freeman Aquatic Center at the University of Minnesota. The Buckeyes took the lead at the event on day two and never relinquished it, taking the final victory with a team total of 1,584 points. Michigan finished second with 1,326.5 points, followed by Indiana, Northwestern and Wisconsin with 1,066.5, 992 and 749.5 points, respectively.

Then, in singles, Ohio State dropped just a single set (between Kingsley and Lakoseljac) on the way to a resounding victory.

Ohio State split its first two games of the men’s soccer season. The Buckeyes opened their season with a 3-0 loss to Indiana on Feb. 23, with the Hoosiers scoring in the 48th minute to take the lead, extending it with a penalty kick in the 62nd minute and notching its final goal in the 83rd minute.

However, the Buckeyes were able to break into the win column on Feb. 27 with a 1-0 road win over Maryland. Joe Ortiz scored in the 72nd minute off of a snappy pass from Laurence Wootton, giving the English freshman his first assist and the Air Force transfer his first goal of the season and second as a Buckeye (he scored once in 2019). Cincinnati transfer Noah Lawrence recorded three saves in the clean sheet.

Ohio State finished third and eighth in men’s and women’s track and field respectively at the Big Ten Championships on Feb. 27.

The men were led by Tyler Johnson, who took the crown in the 200 meters and the 400 meters races.

Johnson ran the fastest time in the nation to win the 400 meters in a Big Ten championship meet record time of 45.07 and then notched a 200 meters personal-best of 20.86. He was also a part of the 4×400-meter relay-winning team, along with Donnie James, Tyrese Fajardo and Frank Hayes. The team won in 3:08.45. All four were named first-team All-Big Ten Conference. Clarence Foote-Joyner.

On the women’s side, Adelaide Aquilla defended her shot put title, while Marcia Sey ran the 60 hurdles in a personal best time of 8.27 to take third.

The softball team had a perfectly balanced start to its season, splitting all three of its season-opening double headers against Iowa on Feb. 26, Minnesota on Feb. 27 and Nebraska on Feb. 28.

To start the season, the Buckeyes knocked off the Hawkeyes 3-2, but fell in the second leg 4-3. Freshman Allison Smith got the nod to start the season on the mound and pitched a complete game, featuring nine strikeouts to just five hits.

On day two, Ohio State went 11 innings in game one with the Golden Gophers on the way to a 2-1 victory.  Senior Payton Buresch went 10.1 innings without giving up an earned run. Kaitlyn Coffman knocked in the winning run on a RBI double in the top of the 11th. Smith closed out the game.

Finally, Ohio State was able to topple the Cornhuskers in game one 4-2, but couldn’t pull off a late rally attempt in game two, dropping 2-1 to move to 3-3 on the season.

The Buckeyes squared off with both Mitten-state teams on the tennis courts this week, crushing Michigan State 6-1 on Feb. 26 to improve to 8-2 on the season before falling 4-3 to Michigan on Feb. 28. The full scores have been included below, via Ohio State.

Ohio State dropped a pair to Rutgers on Feb. 26 and 28, moving to 1-3 on the season with Johns Hopkins up next on the schedule.

Game one saw the Buckeyes behind early, trailing 4-1 after 10 minutes, but a rally gave them a 7-5 lead nearing halftime that the Scarlet Knights would whittle down to 7-6 entering the break. Four straight Rutgers goals to open the second half was enough to decide the game, as Rutgers cruised to a 12-9 victory. Liza Hernandez had a team-best three points with two goals and an assist.

In game two, Ohio State again led at the half, 7-5, but three straight Rutgers goals opened the third frame. Ohio State battled back to tie the score twice in the final 15 minutes, but Rutgers grabbed a game winner with 4:39 to play, 10-9.

It wasn’t a great week for the women’s golf team as a whole, as it finished ninth at the Gators Invitational on Feb. 23 and fifth at the FSU match up on Feb. 28, but the bad fortunes did not apply to sophomore Aneka Seumanutafa.

Seumanutafa was one of just four players under-par at the former, shooting two-under for the event, enough to finish as the runner-up. She shot three-over at the latter, good enough for fourth among all competitors.

Ohio State’s first match of the 2021 season took more than 400 days of waiting to arrive and required more than the usual 60 minutes assigned to a field hockey game. The Buckeyes went to overtime with Rutgers in their season-opener on Feb. 28, taking a 1-1 tie through the final minute of regulation.

It was Rutgers that came out on top though, with Milena Redlingshoefer scoring late in overtime for the win. Emma Goldean was the lone scorer for the Buckeyes.

No. 6 Ohio State came up short against No. 9 Rutgers on Feb. 27, taking its first loss of the season, 22-12. Rutgers jumped all over Ohio State and claimed an early 9-3 lead that it never looked back from.

Griffin Hughes (five goals) and Tre Leclaire (three goals) were strong for the Buckeyes, but Rutgers notched 58 shots on the day.

“Credit to Rutgers,” said head coach Nick Myers. “They are a good team and did a nice job today. For us, we will regroup, refocus and turn our attention to having a great week of preparation for next week at Penn State.”

The women’s soccer team was supposed to play its second and third games of the season over the past week, but had the second part of its two-game week against Nebraska on Feb. 28 postponed out of “an abundance of caution for both teams” according to a school release.

In the first game, however, Ohio State swamped Wisconsin 3-1 to take its first win of the season and improve to 1-1 on the year.

Sophomore Emma Sears scored all three goals for the Buckeyes, first in the 11th minute, followed by a strike in the 36th minute and her last in the 89th minute. She has all four goals on the season for Ohio State.